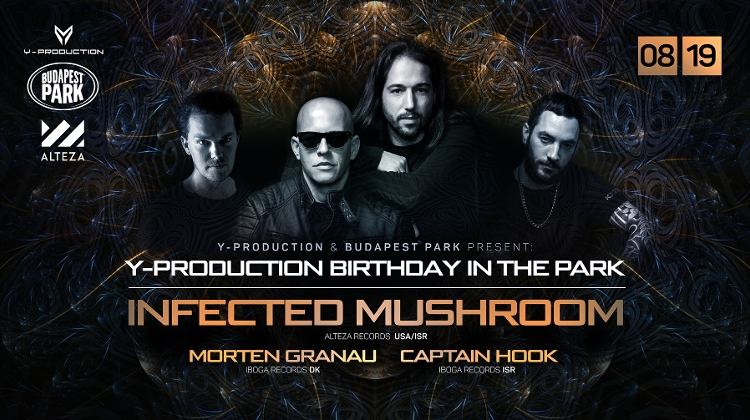 Infected Mushroom is an Israeli musical duo formed in Haifa in 1996 by producers Erez Eisen and Amit Duvdevani. They produce and perform psytrance, electronica, dream trance and psychedelic music. They are one of the best-selling groups in Israeli music history in terms of both domestic and international sales.

Captain Hook is one of the top DJs, musicians and producers on the Psychedelic Trance (Psytrance) & Progressive Trance scene. Traveling a diverse musical path, Reshef Harari always achieved success guided by the frequencies.

From the early days of DJing with vinyls, through the successful collaborative project Quantize, the visit to Techno-land as Sheff with releases at top labels, and finally as Captain Hook, with which he took over the world by storm.

Following his heart and sonic manipulations he keeps innovating and never stagnating. With two top selling albums at Iboga Records, countless single and compilation releases and collaborating with the best electronic music producers, Captain Hook has been playing in every conceivable festival, party and venue all around the globe.

Morten Granau cuts his teeth on Trance music. DJing and producing already at a barely legal age, the young man from Copenhagen today is held to be one of the most up-and-coming talents of the lively Danish scene, a youthful and highly dynamic source of pumping Progressive grooves.

It is 2001 when 13-year old Morten discovers the realm of ‘adult pleasures’ - one of the most fascinating ones being Psytrance. Instantly hooked he starts creating own tracks on his computer, also he gets into DJing. At the age of only 15 he is setting on fire the floors at legendary local clubs of his hometown. Morten Granau’s production style is varied and hard to pinpoint.

There is a very deep and psychedelic touch of classic Progressive Trance to it, but also a modern feeling of clubby funkiness. Together with his good friend Phaxe he gains first attention with the track “The Grudge”, released under the duo’s project name High & Mighty.

The title that marks a turning point in his solo career is “The Way Life Should Be” which gains great international feedback when being published in 2008. The increasing popularity of Morten’s entertaining grooves makes him a welcome guest at parties and festivals around the world.

Besides releasing high-quality Progressive Trance under his civic name and creating progressive and deep house tracks as High & Mighty, the young go-getter is also known as the One Man Orchestra which stands for melodic Minimal Techno and Deephouse.