New Protest Held at Parliament Against KATA Changes in Hungary 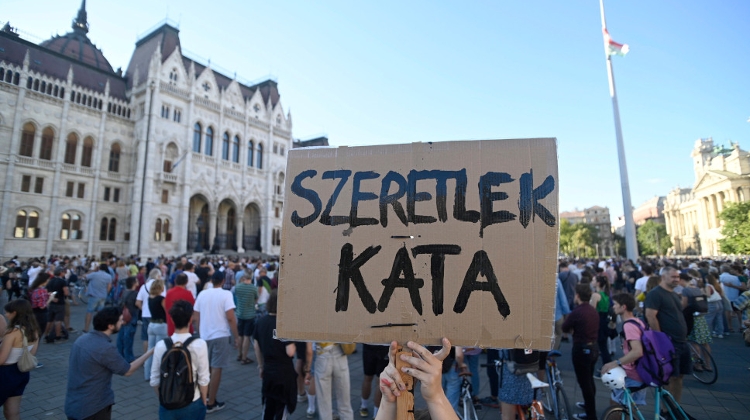 A demonstration organised by the opposition Momentum party was held in front of Parliament on Wednesday evening in protest against recent changes to Hungary’s small business tax (kata).

Momentum head Ferenc Gelencsér said his party would propose an extraordinary session of parliament to drop the changes passed on Tuesday.

He said Momentum would appeal to the Constitutional Court should its proposal be dropped. Momentum has also asked President Katalin Novák not to sign the legislation and request the top court to review the changes, he added.

While the ruling parties said in their election campaign that they could “save the country from war and crisis … not only are they failing to prevent the crisis but they are the ones generating it,” Gelencsér insisted.

He accused the government of destroying businesses amid soaring food and raw material prices. “In this situation society must cooperate because those in power will only speak the language of power,” he said.

After the demonstration, police detained several protesters who obstructed traffic in Budapest and brought charges in one case of violence against a police officer, among others.

The official website police.hu said that while the police ensured citizens’ right to free expression of opinion and peaceful protest, they took action when demonstrators obstructed traffic in busy junctions.

Police have filed misdemeanour charges against three people who blocked traffic in the junction of Andrássy Boulevard and Bajcsy-Zsilinszky Street in downtown Budapest. They arrested a man who hit a police officer on the head with a chain, and another for rowdy behaviour, the website said.

Two people were arrested on Elisabeth Bridge for disobeying police instructions to keep to the pavement.

Another two were detained on Margaret Bridge for similar reasons. Three people were restrained after refusing to obey police instructions.