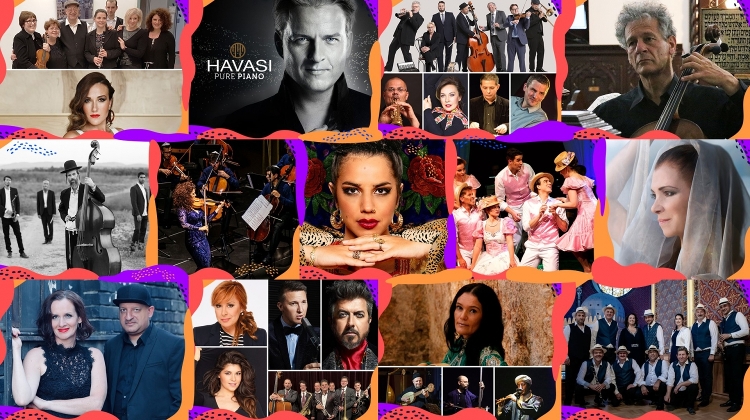 The 24th Jewish Cultural Festival will be held at seven venues in Budapest this year, under the slogan “Tuned to joie de vivre”.

The main goal is to become an important part in the cultural life of the Hungarian capital, and to play a role in the further development of the Jewish quarter of Budapest.

In recent years, the festival has deservedly become a recognised and prestigious event in the capital’s artistic life, featuring stars of the Hungarian and international music scene.

The organisers say that after difficult times due to the pandemic, the motto of this year’s festival is “We tune to joie de vivre”.

The colourful programme includes concerts of popular and classical music, literary and children’s programmes, performed by Hungarian and international performers.

It will be held around the city: in Dohány Street, Frankel Leó Street, Hegedűs Gyula Street and Rumbach Street synagogues, and in the House of Music Hungary..

The organisers say, "We have always focused on high quality artistic entertainment, but this year we have tried even harder to offer programmes that will help us all forget the terrible years of the epidemic we hope to have left behind".

This year’s series of programmes does promises a lot, with more than 24 musical, literary and artistic programmes in the seven venues.

Traditionally, the Dohány Street Synagogue in Budapest has been the main venue of the Jewish Cultural Festivals, as the building is the iconic site of Hungarian Neologue Jewish life.

Many of the programmes of this year’s festival from 4 to 12 September will also be performed here, with several programmes that are sure to attract a particularly large audience.

After twenty-three sold-out concerts at the Budapest Arena, this time he will perform a solo piano recital at the Jewish Cultural Festival.

Moreover, it is not only his virtuoso playing that we can admire this time, as Balázs Havasi introduces each piece with recollections and personal musical stories associated with it.

Also for example, on Wednesday 7 September, from 8pm, a tribute to the unparalleled oeuvre of Barbra Streisand will be performed.

The celebrated star of New York’s Broadway turns 80 this year. This evening in her honour will feature wonderful artists such as Andrea Szulák, Mónika-Nika Veres, Bálint Gájer, Boldizsár László and the Don Lázi Swingtet led by trumpeter István Lázár.

The concert will feature world-famous songs such as Hello, Dolly, The Way We Were and A Star is Born and songs from the musical Funny Girl.

Returning audiences to the Jewish Cultural Festival will already know that the legendary Fegya Jávori and his band, the Budapest Klezmer Band, play here every year.

In their unique musical compositions, traditional Yiddish motifs are complemented with elements from Gypsy and folk music, spiced up with a touch of modernity.

The popular Klezmer Band will be playing at this year’s festival on Thursday 8 September from 8pm, and they will be joined by a host of guest artists – and not just any guest artists Opera singer Andrea Rost, will take the stage of the Dohány Synagogue, this time performing Hungarian, Gypsy and Yiddish folk songs.

Another special feature of the concert is that Fegya‘s band will be joined by such masters of folk music as Mátyás Bolya, Miklós Lukács and Balázs Szokolay Dongó.

If you want to see and hear a real, authentic, exotic Israeli singer, get a ticket for the House of Music Hungary on Monday 5 September at 7.30 pm, where the new diva of pop music from the East, LALA Tamar, will give a concert.

With her radiant femininity and her distinctive voice, Lala Tamar, who has a unique, modern take on her North African Jewish heritage, authentically portrays the Moroccan Jewish music culture of Spain – but it’s not just her music that is special, she is special herself.

Born in Israel to parents from Morocco and Brazil, Lala has been influenced by North African and Brazilian music from childhood, in addition to Middle Eastern music.

In her concert in Budapest, she transforms Ladino melodies into hip-hop’s 21st century rhythms and turns them into pulsating, upbeat pop songs at the House of Music (1146 Budapest, Olof Palme sétány 3).

The synagogue on Frankel Leó Street offers two programmes: on Monday, 5 September, at 7 pm, the Klezmerész band will take the stage with their star guest, Veca Janicsák.

Founded 18 years ago, the band plays Yiddish and Sephardic songs in Hebrew and Hungarian and has been a regular participant in the event for more than 10 years. The unique sound of the band is created by the special vocals of two extremely talented singers (Judit Klein and Judit Török), and now they are joined by a third performer, Veca Janicsák.

Throughout his career, the cellist has worked with artists such as György Solti, András Schiff, Rudolf Serkin, Claudio Abbado, Nikolaus Harnoncourt and Lorin Maazel.

His current programme includes J.S. Bach’s Suite in C major and Suite in C minor, both written around 1720, and both of which require exceptional preparation and technical skill to perform.

Pál Banda has been a member of the English Piano Trio since 2012 and is a professor at the Purcell School and the Royal College of Music in London, regularly giving masterclasses in cello and chamber music around the world.

This year’s Jewish Cultural Festival kicks off on Sunday 4 September with a series of events at the Gyula Hegedűs Street Synagogue, starting at 7pm with a production of Songs in the Pest Moonlight.

This performance showcasing signature pieces of famous operettas by Béla Zerkovitz and performed by the Monarchia Operett in a spectacular concert show.

The series of events on Hegedűs Gyula Street (1136 Budapest), will be closed by festival regulars, the versatile Sabbathsong Klezmer Band, on Monday 12 September at 7pm.

The 10-member group has many surprises in store for this year’s concert, including heart-warming and lyrical songs among the many blood-pumping tunes.

The beautiful voice of singer-actress Andrea Malek with her fellow musicians at Rumbach (1074 Budapest, Rumbach Sebestyén u. 11-13.) on Monday 5 September from 7pm.

Malek Andi Soulistic band will perform songs with a heart-warming rhythm based on Yiddish and klezmer motifs in the first half, while in the second half of the show Andi Malek will sing songs by the Hungarian composers dearest to her heart, including Szabolcs Fényes and Pál S. Gábor.

On Thursday, 8 September, at 7 pm, Orsolya Korcsolán and the Anima Musicae Chamber Orchestra will give a concert titled 4 Worlds, 4 Seasons.

The production promises to bring together klezmer, romantic music, liturgical songs and the Baroque era, presenting four worlds: the romanticism of Max Bruch, the vibrant and buoyant music of the young Mendelssohn, Fegya Jávori‘s klezmer-Doyna for violin and orchestra, and Vivaldi‘s most famous work, the Four Seasons.

On Sunday 11 September, from 7pm, the Mediterranean Sea will “roar” as Mara Aranda, one of the biggest Spanish stars of Sephardic music, takes the stage.

Initially, the artist and her fellow musicians worked on Arabic, Balkan, Greek, Israeli and Turkish melodies based on Valencian roots, which is why she was dubbed “the voice of the Mediterranean”.

Then Mara Aranda turned her attention to Sephardic Jewish music, and in her current concert she will offer an insight into how Sephardic music might have sounded in the Middle Ages through a unique orchestration of medieval and modern soundscapes.

The series of programmes at the Rumbach will conclude with Andrea Bauer and her fellow artists performing Queen of Sheba on Monday 12 September at 7pm.

The work tries to get to the bottom of where good and goodness come from in human beings, what spiritual content is implied by the feeling of belonging somewhere, the awareness of being part of, i.e. witnessing and experiencing, the natural world and its awakening.