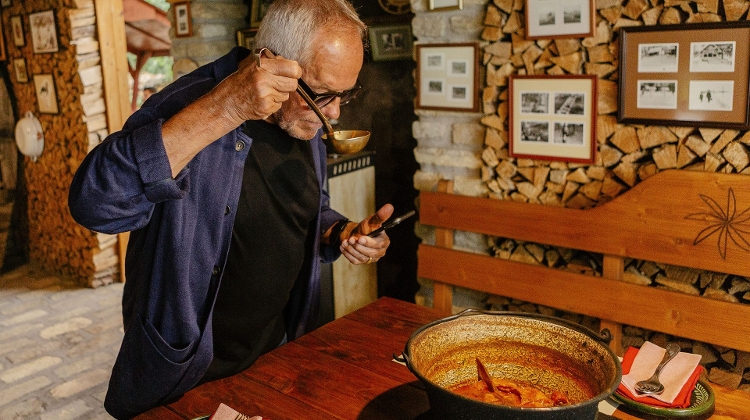 What does Zsófi Mautner show to a world famous star chef from the gastronomy of the Hungarian countryside? Fisherman’s soup and paprika, of course.

Wolfgang Puck is without any doubt a legendary chef. According to the Chinese Morning Post, he occupies the prestigious 6th place on the international list of the 10 richest chefs, with his net worth estimated to 90 million dollars.

He has more than 25 restaurants worldwide. He opened his first European restaurant in Budapest last year, and since then he’s been visiting Hungary regularly. During his most recent visit, Zsófi Mautner showed him two special places: a paprika producer and a restaurant where they make arguably the most delicious fisherman’s soup in the country, by following the simplest recipe.

Puck and István Szántó, his chef of Spago Budapest, could met the owners of Fajszi Paprika Manufacture, thanks to Zsófi. After this year’s party following the Oscars, István has also prepared Hungarian dishes. Of course he brought the paprika from Hungary, from the Fajszi family who have been producing paprika for four generations now. The chefs were delighted to finally meet the family in person. 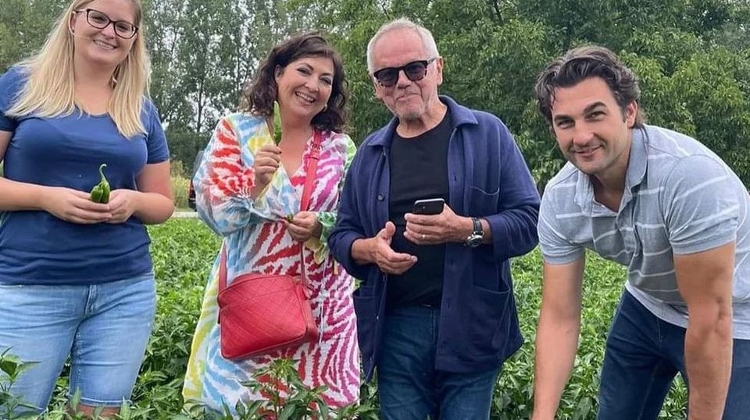 "I started to get familiar with Hungarian ingredients when I opened the restaurant in Budapest” – said Wolfgang Puck.

"I have many restaurants around the world, I travel a lot, but I live in Los Angeles. If I’m not familiar with certain places, or I’m too far away from the restaurant – like the one in Istanbul, Dubai, Singapore, Maui or even Budapest – I always trust the kitchen with a local, excellent chef.

They know where to find good ingredients, the best quality products. István showed me this paprika first. The family’s work on these 30 hectares is fascinating. They irrigate the lands with the water of the Danube, their expertise and the end result are really impressive, it’s no wonder that they also win international awards.”

"When I had the opportunity to be Wolfgang Puck’s tour guide for a day, these two things came to my mind: fisherman’s soup and paprika” – says Zsófi.

"A star chef like him visits a lot of places. On these occasions it is important to show a more authentic part of our culture. On Érsekcsanád fisherman’s soup is prepared in a cauldron, and it is not by chance that RévCsárda has become a place of pilgrimage for foreign chefs. Hungarian gastronomy has undergone a real transformation in the last 15 years.

We are looking for the place of Hungarian food, how tradition can also be present, but in a modern appearance suitable for the 21st century.  If we can meet Wolfgang the next time, I will introduce him to ’főzelék’. These vegetable-based dishes correspond perfectly to the vegetarian, vegan trends of the era, while still being a true traditional element of our country’s gastronomic culture.”

Wolfgang Puck always tries to get to know local producers during his Hungarian trips, in addition to the fact that there are a couple of booths he usually visits on the market of Fővám square. He’s already been to Etyek at László Árpás ’Ham Master’, now it was the Fajszi family’s turn, and he promised to return soon, with Tokaj being his next target.

"For me passion is the most important word when I’m asked about gastronomy and my profession” – says Puck.

"What I look for in everyone is how passionate they are about what they do, what they create. We work in an industry where the most important thing is that the guests are happy. We can only achieve this if our work is also our passion. I looked for this and found this at the paprika producing family and at the inn. This program was a real boost.”