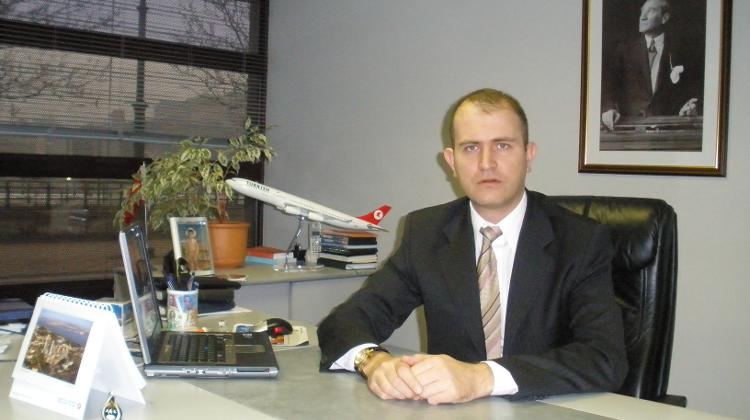 Born in 1974 in Duisburg, Germany, the parents of Mr. Arisoy were ‘guest workers’ at that time, and in 1986 they went back to Turkey. In 1995 he completed the University of Marmara in Turkey, his studies were ‘German Didactic and Pedagogic’.

Levend joined Turkish Airlines during his Uni days in 1994 as a part time check-in staff, and continued after 1998 as a permanent member of the team in the same position, from where his career really took off.

He has been married since January 2001, and has 2 children, the first a daughter who is now 7years old, and a son who is 6 years old at the moment.

1. When did you arrive in Hungary and what brought you here?
July 2008, with my family , due to a transfer order from my company headquarters.

2. Have you ever been an expatriate elsewhere?
I’ve been an expat for around 15 years. My experience started in Simferopol, Crimea, for with 4 years. After that I spent another 4 years in Karachi, Pakistan. 95 % of our memories are positive, mainly because of good friendships made there, and a good standard of living there in 2004.

At home we had a gardener, and I also had a driver, so life felt easy and simple. The remaining 5 % is connected to the fear of terror; looking back we were lucky not to be in the wrong place in the wrong time. This is our 6th year here in Hungary. So altogether over 27 years spent around the world when you count my childhood, I’ve lived less in my own country than abroad.

3. What surprised you most about Hungary?
Relative quietness and ease of life compared to where I came from. We arrived on a Friday night and I instantly fell in love with Budapest, it was exactly what I need.

4. Friends are in Budapest for a weekend - what must they absolutely see and do?
We getting lots of friends arriving from Turkey, and we usually take them to Fisherman’s bastion, Gellert, Buda castle, Hero’s Square, Parliament and Basilica. János hegy to look around from the lookout tower. Also to Esztergom, to the Visegrád castle, and on the way back we take a break in Szentendre to walk on the little streets which are so very nice..

6. What is never missing from your refrigerator?
Olive oil, and cheese - all kinds from normal white cheese, Gouda, Emmental, and also Halumi for grilling. Cheese is a must!

7. What is your favourite Hungarian word?
Nagyon jó.

8. What do you miss most from home?
My parents and friends.

9. What career other than yours would you love to pursue?
Soccer player.

10. What's a job you would definitely never want?
A pilot, I know a lot of them and they have a hard life I think. They have to be very professional all the time given their great responsibilities. They have to fly from summer to winter and back all the time, and change time zones and fly early in the morning then late at night. It is a very respectable but really hard job.

11. Where did you spend your last vacation?
It was 2 years ago, in Bodrum, Turkey, it is even nicer than Antalya, a great and popular place in Turkey, where the all-inclusive concept makes life easy.

12. Where do you hope to spend your next holiday?
Datca, Turkey, the ancient city of Knidos. It is a quiet place with small boutique hotels, with cold water and hot weather, where I can really relax and recharge my mind.

13. Apart of temptation what can't you resist?
My kids, when they ask me to play. It does not matter how tired I am, they can always convince me, and I enjoy it so much.

14. What was your favourite band, film, or hobby as a teen?
E.T. was the first movie I saw in the cinema. To this day I can remember it clearly as I had to choose between watching a live soccer match of Bayern Munchen and seeing this movie. Also the movie ’Grease' comes to mind since I had two sisters and one of them was always forcing me to dance with her.

I played soccer until I was 27 at quite a good level, but I don’t anymore. I played in Istanbul as an amateur. Also on the topic of hobbies I can mention Sony Playstation 2 and 3, I now plan to upgrade to a PS4

16. Book or movie?
I like reading but these days I’ mostly watching films.

17. Morning person or night person?
I used to be a night person, but that changed 10 years ago because of the kids.

18. Which social issue do you feel most strongly about?
Terror – killing innocent people is unacceptable whatever the reason. If I had a magic-wand I would change this first.

20. What would you say is your personal motto?
The game is now!