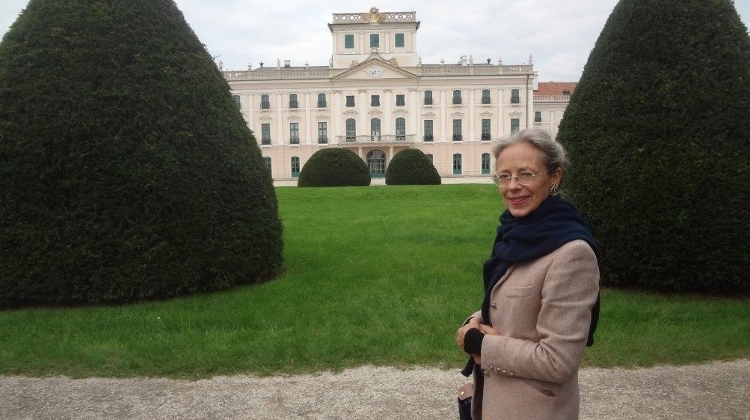 Primary & Secondary Education in Paris as well as political science (diploma in 1968 at the IEP, Paris), then Master of History from the Sorbonne (1969) and DESS (postgraduate diploma) in Documentation and Library Science from the Institut d'Etudes Politiques de Paris (1970). Two years at the Langues Orientales (ENSLOV) to learn Hungarian…

Since 1994: Administrator, Director of Cultural Programs and Director of the European Documentation Centre for the Joseph Károlyi Foundation, a Hungarian non-profit organization created to promote Hungary’s opening to Europe and to assure the reconversion of the Karolyi family estate in Fehérvárcsurgó into a European Cultural Meeting Centre : organization of numerous international conferences on questions of political science, history and heritage development. Since 2005, an annual European Art of the Garden festival is organized in the park.


1. When did you arrive in Hungary and what brought you here?
The first time short visits to Hungary happened in 1984 and 1985,then 1990, 1991 and finally we started working at the restoration of a former family stately home in 1998, but never staying all year long until 2005, always coming back to Paris, so we could say that at the beginning we were “half time” expat…and we became really full time expat after 2005.

2. Have you ever been an expatriate elsewhere?
Not really…. But since I was born “expat” as a German in France, so I feel “normal” when I am “abroad” wherever it is..I don’t feel really expat neither in France nor in Hungary, though being “officially” expat in Hungary…I feel European!

3. What surprised you most about Hungary?
Too often pessimism

4. Friends are in Budapest for a weekend - what must they absolutely see and do?
Kiraly u, szimpla kert, Andrassy ut, Matthias templom and have a dinner by night in summer on the Halàszbàstya…and go to the Opera if possible!

5. What is your favourite Hungarian food?
Töltött kàposzta (stuffed cabbage)

6. What is never missing from your refrigerator?
Oranges, salads, jogurt and cheese

7. What is your favourite Hungarian word?
“Szivesen” because the word “heart” is in it…

8. What do you miss the most from home?
The sight of the “vitrines” in Paris, the newspapers of the day, the cultural offers even if I don’t go everywhere I would like to go…

9. What career other than yours would you love to pursue?
Maybe interior decorator (when a child I dreamt to be a ballet dancer, then a journalist….)

10. What's a job you would definitely never want?
When it is necessary there is no “impossible” job, it is just the way one sees it…”nothing is good or bad, just thinking makes it so”…

11. Where did you spend your last vacation?
In Greece with our daughter and her children who live there

12. Where do you hope to spend your next one?
In Greece

13. What was your favourite band, film, or hobby as a teen?
No Band: Italian Opera
Film: “Il Gattopardo”, from Visconti “Il Postino” from Michael Radford
Hobby: travelling around Europe

14. Apart of temptation what can't you resist?
The sea in summer and a cup of tea at 5’o clock

18. Which social issue do you feel most strongly about?
The (im)migration issue (about which I organize an international conference on April 1st and 2nd 2016.)

20. What would you say is your personal motto?
My family motto was “slowly and surely” (“langsam und sicher” with a snake on the coat of arms…) but I don’t fit in it… my motto would be “never stop”….