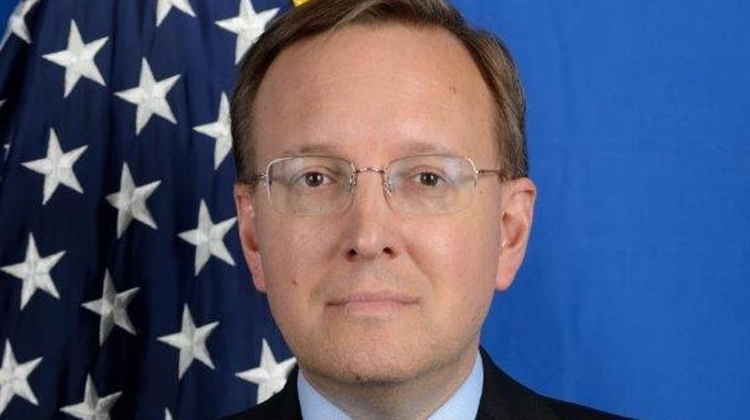 David Kostelancik, a career member of the Senior Foreign Service of the United States, rank of Minister Counselor, began his posting as Deputy Chief of Mission at the U.S. Embassy Budapest, Hungary in August, 2016. Since January 20, 2017 he has been the Charge d’affaires.

In addition to work in Hungary, he has been posted to Russia, Austria (OSCE), Belgium (NATO), Albania and Turkey. He has held additional assignments in Washington, including as Deputy Director of the Office of Central Europe in the Bureau of European and Eurasian Affairs.

Mr. Kostelancik received Bachelors of Arts degrees from Northwestern University in Mathematics and Political Science, a Masters of Arts degree from The University of Michigan in Russian and East European Studies, and a Masters of Science degree from the National War College in National Security Policy. He is married; he and his wife have three sons.

1. When did you arrive in Hungary and what brought you here?
I arrived with my wife and son in August, 2016. I was assigned to the US Embassy as the Deputy Chief of Mission, and became the Charge d’affaires in January, 2017.

2. Have you ever been an expatriate elsewhere?
Yes. I have served in the US foreign service for over 25 years, living and working as an expat in Turkey, Albania, Russia, Belgium, Austria and now Hungary.

3. What surprised you most about Hungary ?
Fantastic Asian food. I was not expecting it here, and it has been great.

4. Friends are in Budapest for a weekend - what must they absolutely see and do?
Visiting the stunning Castle District, the Jewish District, a picturesque river boat ride and strolling along the river in order to take in the beauty of Budapest’s bridges and architecture.

5. What is your favourite Hungarian food?
Stuffed cabbage. It is absolutely amazing here.

6. What is never missing from your refrigerator?
A bottle of white wine, some ham and cheese, and eggs.

7. What is your favourite Hungarian word?
Természetesen

8. What do you miss the most from home?
Deep dish pizza.

9. What career other than yours would you love to pursue?
Musician – with an orchestra or a jazz band.

11. Where did you spend your last vacation?
Chicago, visiting my family there.

12. Where do you hope to spend your next one?
Italy, stopping in cities and towns while driving from Budapest to Rome.

13. What was your favourite band, film, or hobby as a teen?
Talking Heads

14. Apart of temptation what can't you resist?
Bread. I love all kinds of bread.

16. Book or movie?
Book. Though I enjoy going to the Corvin and Urania theaters to watch movies, too.

18. Which social issue do you feel most strongly about?
Any discrimination based on who a person is – his/her race, color, religion, sex, sexual orientation, etc.

19. Buda side or Pest side?
Pest. It is where the embassy is located, which means I spend a lot of time walking its streets and getting to known restaurants and shops.

20. What would you say is your personal motto?
Work hard. Strive for excellence.