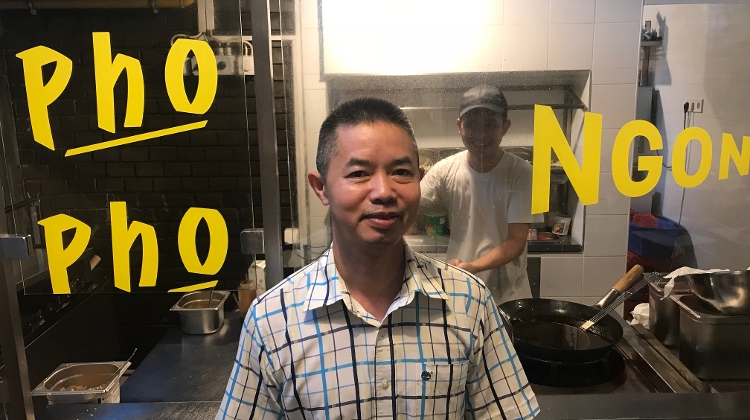 Mr. Nguyen grew up in Ha Noi, Vietnam in complicated times. After his high school graduation he had the opportunity to study in Budapest, the city he has been living in now for more than 30 years.

He is currently running the Thai and Vietnamese restaurant called Ngon and the Saigon Supermarket next to it in Budapest's 10th district.

Luu has three children born in Budapest, and managing the restaurant together with his wife and oldest son.

He speaks good Hungarian, and a practices Buddhism - in fact he is one of the major supporters of the only Thai-Buddhist temple in Budapest.

1. When did you arrive in Hungary and what brought you here?
After the American-Vietnamese War, there was vast poverty back home. I was really eager to study and provided by my grades, I had the opportunity to pursue a future outside of Vietnam. I did not know much about Hungary back then, but I was aware it had great agriculture and chicken with an extraordinary taste! I thought until there is food on the table everything should be fine. I arrived in Hungary in 1985, with a scholarship provided by the state of Hungary, studied Hungarian for a whole year, started to study at the Faculty of Sciences of ELTE and got my degree in meteorology. I also got a law degree from ELTE which I finished in 1999.

3. What surprised you most about Hungary?
Actually, I was surprised by a bunch of things! My first major impression was that everyone looks exactly the same. I needed a week to really differentiate one person to another. When I arrived it was the beginning of fall, leaves were yellowish, the sun was shining, all this felt magical for me.

A few days after my arrival I was already at the Ecseri market, I really connected to its atmosphere. Soon I began to trade smaller items in the market, which was a lucrative side project further supporting my scholarship. Besides, it was a big thing that time I could buy a JVC HI-FI sound system and Puma sneakers! It was anything but ordinary in those days.

4. Friends are in Budapest for a weekend - what must they absolutely see and do?
My suggestions would be to check out the essentials: Heroes’ square, the Fisherman’s Bastion, Parliament, Szechenyi Baths and the Castle.

6. What is never missing from your refrigerator?
I always have a lot of Asian vegetables and fruits in my refrigerator.

8. What do you miss the most from home?
I miss the way of Asian living, the atmosphere of the extremely vibrant city of life. Budapest is a bit sterile compared to that.

9. What career other than yours would you love to pursue?
I would aspire to be a politician, actually, I even had the opportunity back in 1998. That year the Vietnamese government delegation was on a field trip, examining the transformation from planned economy to market-oriented. They told me I would fit as a political candidate, and asked me to go back to Vietnam to work for the party! It would have been interesting for me, but there was a much important duty I had to fill: my son was only 4 years old, so I refused the offer.

10. What's a job you would definitely never want?
I refuse the idea that there is a job I would never want. What you do in the present and the future are always rooted in your behavior and actions in the past. You never know a 100% what your past actions and behavior will bring upon you later.

11. Where did you spend your last vacation?
I was in Italy, Venice.

12. Where do you hope to spend your next one?
I really want to spend my next holiday in Croatia, in Split and Postrana.

13. What was your favourite band, film, or hobby as a teen?
I was into Bee Gees, Pink Floyd and Police.

14. Apart of temptation what can't you resist?
I’m happy to say I have no temptation where I’m not fully in control. I practice Buddhism for many years and self-control is one of the cornerstones of the religion.

18. Which social issue do you feel most strongly about?
I’m concerned about supporting students coming from a poor background and decreasing unemployment.

20. What would you say is your personal motto?
Always create value!