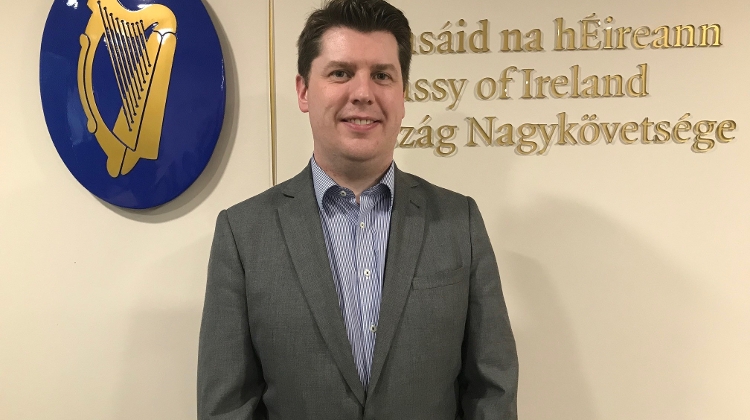 Ronan Gargan is the new Irish Ambassador to Hungary (also covering Kosovo and Montenegro), arriving in Budapest with his wife, Michelle, and three children, Grace (7), Nathan (6) and James (1) in August 2019.

Prior to his appointment as Ambassador, Ronan was the Director of the EU-UK Unit in the Department of Foreign Affairs & Trade, dealing with the Brexit negotiations, including the specific issues relating to the island of Ireland and the peace process in Northern Ireland.

Ronan has had two previous postings. His first posting was as Ireland’s Deputy Permeant Representative to the Council of Europe in Strasbourg. From 2011 until 2015, Ronan worked as the lead Policy Coordinator in Ireland’s Permanent Representation to the EU in Brussels, which included working on Ireland’s last Presidency of the EU in 2013.

2. Have you ever been an expatriate elsewhere?
As a diplomat, spending time in other countries goes with the territory! My first posting in 2007 was to Strasbourg as Deputy Permanent Representative to the Council of Europe and in 2011 I moved to Brussels to work in Ireland’s Permanent Representation to the EU.

3. What surprised you most about Hungary?
Apart from the beauty and vibrancy of Budapest, it is Hungary’s amazing wine. I have enjoyed tasting your wonderful wine from all around the country.

4. Friends are in Budapest for a weekend - what must they absolutely see and do?
There is just so much to do in Budapest, they should come for longer than a weekend! But the absolute must do are a visit to the baths, a stroll around the castle region and a visit to the national gallery and for something a bit different a ride up the Buda bills on the Children’s railway.

5. What is your favourite Hungarian food?
Beef goulash! An obvious choice but there is nothing more warming and tasty on cold winter’s day.

6. What is never missing from your refrigerator?
Irish butter which is thankfully readily available in Hungary.

7. What is your favourite Hungarian word?
‘Jó’! It is a happy word, plus it is easy to pronounce!

8. What do you miss most from home?
Undoubtedly friends and family but also spending an afternoon in my local pub watching Ireland play rugby over a few pints of Guinness.

9. What career other than yours would you love to pursue?
I would love to be a professional golfer. It would be amazing touring around the world, playing the best golf courses, not least in Ireland – the golfing Island. But I think that I need to be improve my handicap first!

10. What's a job you would definitely never want?
A politician. It is such a tough job – takes such commitment and you have to interview for the same job every 4 or 5 years! I have great respect for my political bosses.

11. Where did you spend your last vacation?
My family and I spent our last few vacations in Ireland. On the beautiful Wild Atlantic Way on the west coast of Ireland in County Mayo and also experiencing Ireland’s rich heritage and of course ‘the craic’ in Ireland’s Ancient East in Wexford and East Cork.

12. Where do you hope to spend your next holiday?
Looking forward to driving to the Croatian coast this summer and stopping at the amazing Lake Balaton along the way.

13. Apart of temptation what can't you resist?
Apart from the amazing cakes in Budapest, sitting down with a glass of wine and some chocolates to watch a good movie.

14. What was your favourite band, film, or hobby as a teen?
As a teen, I had many favourite bands, including Guns & Roses, Nirvana and U2.

17. Morning person or night person?
I am a bit of an all-rounder but probably function better at night.

18. Which social issue do you feel most strongly about?
Equality. Whether its gender equality or LGBT rights or equality for minorities or the marginalised, I firmly believe that a just society leads to a happy society. Everything else flows from that.

19. Buda or Pest side?
While I love living on the Buda side, I will need to say the Pest side – there is just so much life, fun and vibrancy on the Pest side.

20. What would you say is your personal motto?
While my family moto is ‘Pro Deo et Patria’, or ‘For God and Country’ and while during my time dealing with the Brexit negotiations, ‘Where there is a will, there is a way’ became my moto, I try to live by a George Bernard Shaw saying: “Progress is impossible without change, and those who cannot change their minds, cannot change anything”.