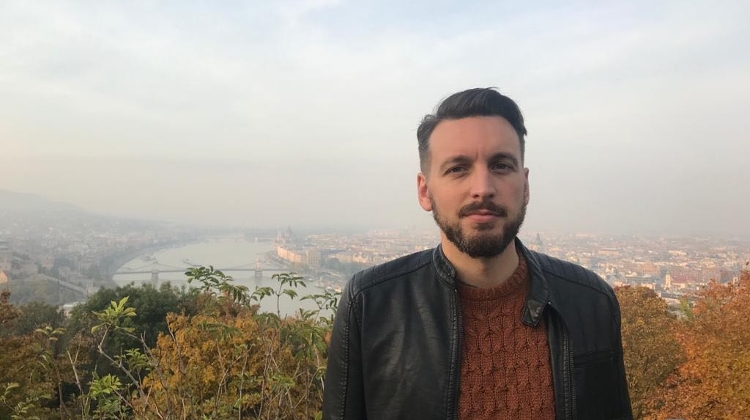 Daniel Cochran is a historian, reseacher and teacher who has lived and worked in Budapest for the last 3 years. He runs Statues of Budapest, a project which explores the history of the city through its sculpture, as well as working as Assistant Director of Studies for local language school, Angol Intézet.

Originally from the North of England, Daniel lived and worked in Tokyo and the Middle East - where he toured with multinational musical project, Belly of Paris - before moving to Hungary in 2018. Last year, he started collaborating with Secret City Trails to produce interactive, self-guided sculpture tours in the heart of the Budapest.

1. When did you arrive in Hungary and what brought you here?
I came to Budapest three years ago. It’s a city I’d visited a few times before and always enjoyed being here. The stately beauty of the river and hills combined with the grimy energy of Pest means you can always head over the river and cleanse your palate. It was also closer to family, although with Covid it hasn’t really helped with that at all!

2. Have you ever been an expatriate elsewhere?
Not a big fan of the word expat, but I’ve lived and worked in Tokyo, Prague and parts of the Middle East before arriving in Hungary. I reached 30 years old and realised I’d hardly left home so took the plunge and have never regretted it. I realise that as a native English speaker I’m incredibly fortunate to have this option.

3. What surprised you most about Hungary?
Just how much there is to see outside Budapest. It’s a surprising country full of areas of beauty. When I heard Hungarians talking about Lake Balaton I had a kind of “yeah yeah...it’s just a lake” attitude. I went and was blown away. It has a very Mediterranean feel and is much vaster than I’d imagined. We’ve travelled to lakes, rivers, mountains, plains, vineyards…it’s well worth leaving the city.

4. Friends are in Budapest for a weekend - what must they absolutely see and do?
I’ve yet to visit a better city for just wandering the streets. The districts have their own character and charm and it’s easy to get lost down rabbitholes. Districts VII and VIII are full of little shops, bars and restaurants - they can be a bit touristy but that shouldn’t put you off. Margit Island is an amazing refuge from the stress of the city (and beautiful to boot). A spa is a must – Rudas, with its medieval Turkish features, is my favourite but the main ones are all stunning in their own way.

Speaking of wandering, I worked with Secret City Trails recently to create a sculpture walk in District V (The central part with the Parliament and Chain Bridge). It's full of info about the city and its history and can be played directly from your phone. I spent weeks walking the area trying to perfect it and people seem to like it so far!

5. What is your favourite Hungarian food?
Hungarian cuisine is definitely a winter thing for me – it’s not exactly light summer fare! I’m partial to a langos, which is a cross between a donut and a pizza (better than it sounds). Pörkölt is what the English-speaking world means when we say goulash – real goulash is actually more of a soup. It’s perfect for the cold evenings.

6. What is never missing from your refrigerator?
Seasonal veg. It’s refreshing to see a country embrace seasonality – in the UK you could get anything all-year-round but flown in from everywhere at huge cost. Here you tend to get vegetables the natural time of the year, which means that your diet changes more. It’s a nice limitation to have.

7. What is your favourite Hungarian word?
Not a word, but the phrase, “kutyából nem lesz szalonna”, which literally means, “you can’t get bacon from a dog”. In English I think it’s analogous to “A leopard never changes its spots”. It’s a very vivid turn of phrase!

8. What do you miss most from home?
Chatter. Hungarians are a bit more reserved at first so you tend to get less of the chit-chat with barstaff, waiters, shopkeepers, etc. When I first went home to a bar in the north of England I nearly burst into tears of joy when the barman started making conversation with me!

9. What career other than yours would you love to pursue?
I’ve started doing a little work in the research world relating to sculpture recently. It’s something I’ve been interested in for a long time. Fingers crossed it comes off!

10. What's a job you would definitely never want?
I like a bit of freedom and responsibility. Anything where I’ve been micromanaged has been excruciating. I don’t understand why bosses trust people enough to hire them but not enough to get on with the job themselves. Your best workers will invariably leave if they are able to.

11. Where did you spend your last vacation?
Szarvas – a beautiful little Hungarian town by the river. We canoed from riverside pub to riverside pub, had a beer, swam in the river, then continued down it. It was simple bliss.

12. Where do you hope to spend your next holiday?
With family. Anywhere really.

13. Apart from temptation what can't you resist?
A challenge. I get a bit obsessed when trying new things and want to master them!

14. What was your favourite band, film, or hobby as a teen?
I was a huge fan of Bjork and Nick Cave, two artists who I’ve stuck with throughout the years. I have a blind loyalty to both. They could release an album of them reading the phonebook and I’d be all in on it.

15. Red wine or white?
Always red in the past, but Hungarian wines are usually white and I’m getting a taste for them. We went cycling around the Tokaj region which is famous for its very sweet whites. Some of them are made with grapes affected by a specific mold which makes them super sweet. It sounds awful but you get this amazing sherryish taste.

16. Book or movie?
Book. I made the switch to e-readers reluctantly but they’re so convenient. I always have three or four books on the go. It’s nice to be in the middle of them.

17. Morning person or night person?
Used to be a nightclub worker and total night owl. Now I’m up at 6/7am and out running. I’ve made the transition over the years without really realising it.

18. Which social issue do you feel most strongly about?
There are so many injustices every day it’s overwhelming. Social issues such as racism, sexism, homophobia, transphobia – it’s ridiculous that people still hold these abhorrent views in a world where you can just choose let others get on with their lives in peace.

In addition, knowing that a minority of protected, unelected billionaires are in control of so much of what we do – and that there’s nothing we can do about the Bezoses and Zuckerbergs of the world - is pretty soul-destroying.

19. Buda or Pest side?
Pest side all the way. Buda is lovely - all hills and castles - but Pest is where things happen.

20. What would you say is your personal motto?
Do, and think later. I’m not saying it’s always been an unqualified success but it’s served me fairly well so far. It led me to my wife, many new friends and experiences, new homes…