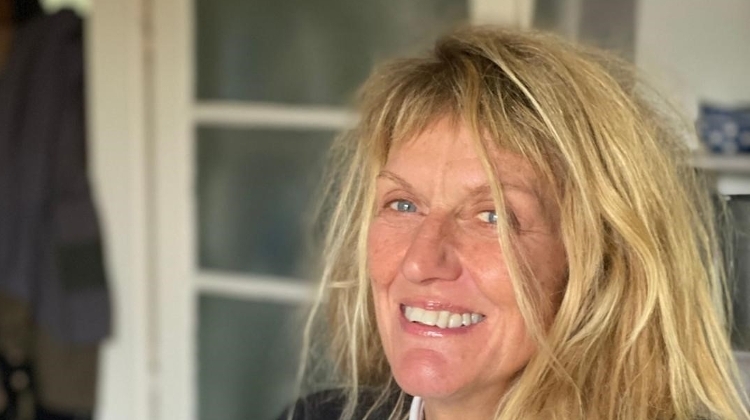 This is part of a series of in-depth interviews with some surprising members of the community, written by Marion Merrick.

It is my second trip over the bridge at Tahitótfalu, past the churchyard with its mossy gravestones, and through the long tunnel of acacia, beech and elder that dapple the sun’s intense rays and send them filtering through the leafy canopy and onto the road before me.

It is not my second trip because I wish to repeat the rural idyll of my visit a week previously (which I am happy to), but because the curious investigations of Kim’s pets, Mahalia and Bailey-Rae, resulted in their switching off my dictaphone – something I discovered only after I had returned home.

The traffic all but peters out as I head along the broad tree-lined avenue past fields of hay bales, horses and the odd cyclist. This time, it comes as no surprise to have my arrival noted, and Kim duly alerted, by her pets.

Kim Glass came to Hungary ten years ago. “I’m ashamed to say that I didn’t even know where Budapest was,” she admits. She had then recently completed her teacher training after many years living and working as an artist in Brighton, on the south coast of England.

“I needed a change,” Kim explains. “My children had left home, and I think I was creatively exhausted. I didn’t just want to be talking to my paintbrushes all day. I trained as a teacher in 2011 because I wanted to do something with people; it’s a way of passing on your skills and helping someone else to create their work.”

Kim was offered a teaching post at an international school in Budapest, in the autumn of 2012. “When I got here, I had a room near the Fisherman’s Bastion, and the first morning – it was dawn – I climbed up and looked down on the river, and with the sun coming up, the Danube looked like a golden snake, and I just wept. It was completely magical.

“I think I realised, probably within a week, that I would stay, and by the end of the year I was looking for somewhere to buy.”

We have now walked to the far end of Kim’s garden, cluttered with fruit trees, fallen apples, spiky yellow grasses, a hammock and an obstacle course of makeshift fencing designed – but failing – to keep Bailey-Rae and Mahalia in check.

“I wanted to live somewhere I could see the river; a colleague at school led bike rides and I said to him: where is the most lovely place? And he said, ‘the northern tip of the Szentendre island.’ It was May – there were all the wild flowers along the roadside, the trees were laden with blossom, the air smelled of honey – by the time we got there, I was speechless. It was so perfect.”

Had I previously failed to imagine what had drawn Kim to this place, then all was made instantly clear: the furthest extent of her land directly borders the Danube with a panoramic view of the hills and forests across the water.

The sweeping vista up and down the immense expanse of the river with hardly a house in sight, the serene stillness and the shimmering heat haze over the almost-still water, is literally breath-taking. 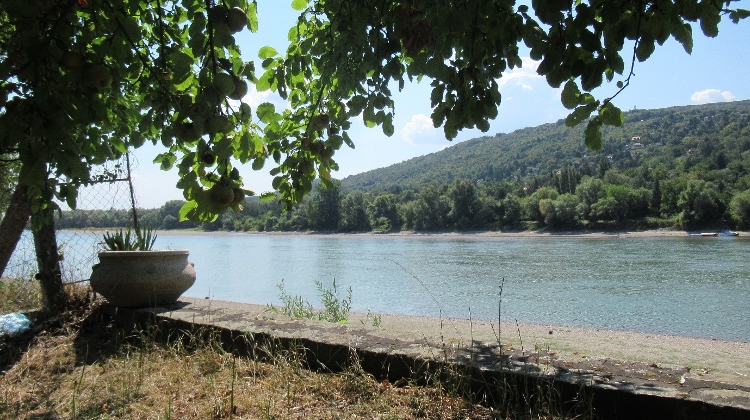 “It did create some ripples in my relationship,” Kim recalls, “I’d made the decision without consultation. But Dave was working all over the world, so I didn’t think I needed to stay in England.

“I kept my flat in Budapest, but I couldn’t stop myself driving out here every night because it was so lovely to be here. I was bewitched by the place.”

Commuting to school meant leaving at 5.30 a.m. to miss the traffic, though it could take two hours to get home. “But it was always worth it – the river’s different every day,” she says.

Kim left her school job in June of 2020 intending to spend more time with Dave, with her art, and to travel. Tragically and unexpectedly, however, Dave died that summer. Kim was left, mid-Covid, to forge some sort of new life for herself in this remote spot.

“Lots of people have summer places here but they don’t stay all the year round. But locals are very kind, they help each other. Winter was coming and I had no wood. Straight away I had to ask around – I knew how to say ‘firewood’ [tűzifa] and someone gave me a name. And the man in the restaurant speaks a bit of English and he put me in touch with everyone – builders, an electrician…he just got them here in my kitchen on a Saturday morning and dealt with them all.”

Always keen on riding, Kim decided to buy a horse from a stables in Szeged. Against advice, she chose Comfort – a rather highly-strung, six-year-old: “We just clicked,” she explains. “But it’s been a journey – within two weeks I was in hospital with a broken nose!”

Throughout the winter months, Kim would take her mug of early-morning tea to the end of her land and watch the sun rise over the river.

She walks extensively on the island, and she has an SUP (Stand-Up Paddle): “I go early in the morning when it’s very still and the sun’s really low – you get the shadow from the hills, a dark backdrop for the light shining on figures and objects in the water. I love that.”

We walk across the road to a second small property that she and Dave bought together for their joint six children to stay on visits, and which also houses her studio.

“I’m hoping this winter, to catch those moments of light but have fun with the dark, using paint,” she explains, as our departure from the house alerts Mahalia and Bailey-Rae who observe us concernedly through the fence.

Inside, Kim shows me a painting she has been working on, describing it as ‘a moment on the river’. “That’s where I’m trying to go with my paintings at the moment,” she explains. “I want the pictures to be of a moment, in the weather…I want to catch the mood.”

Pictures reflecting her passion for birds fill the walls, especially those of golden orioles and bee-eaters, as well as paintings of a nearby lake. 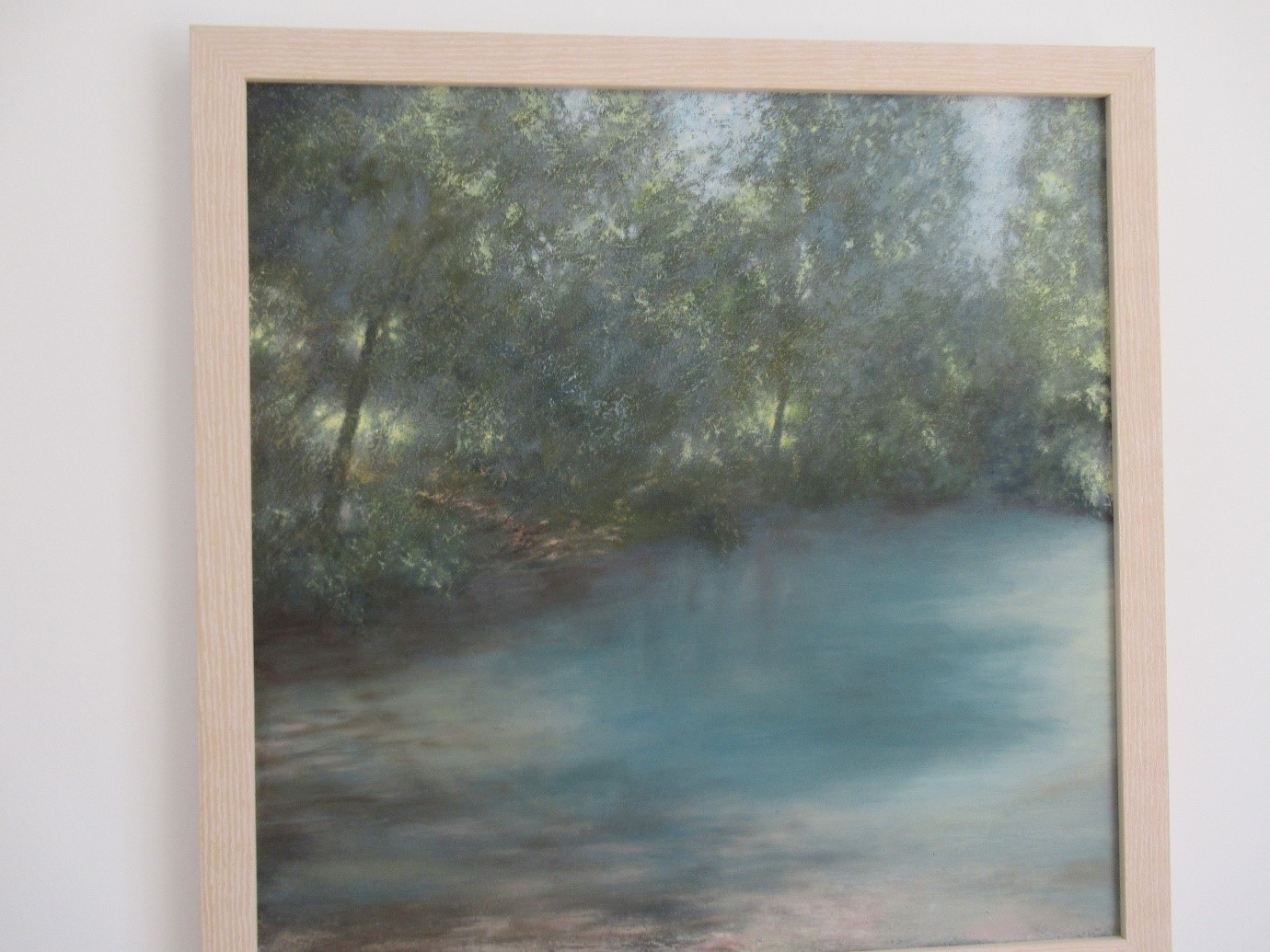 As she looks tentatively into the future, Kim is considering devoting the house’s entire space to a studio and starting to involve others in creating art. “I think people want to be creative – they don’t want to go out shopping, but they don’t know what else to do.

Buying stuff has become a substitute for creating something, I think. What these people really want is to paint or draw or make something. 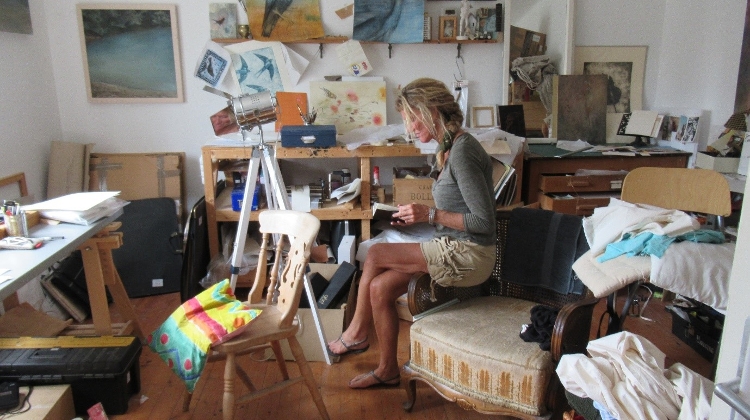 “I’m looking at my own personal work and then involving other people. You want to talk to other people, and other people’s work is exciting. The windows here look out directly onto the street. I did a few drawings of people who live locally, and I thought if I put them up in the window it might amuse people.”

We cross the road again, and Bailey-Rae and Mahalia set up an immediate chorus of agitated bleating as they spot Kim – for her unlikely pets who never leave her side, are in fact two young – though now very large – lambs!

It is they who have necessitated the many inventive (though ultimately futile) attempts to stop them decimating the garden’s flora.

They are unrelenting in their attempts to be as close as possible to Kim, even having areas of bedding up against the glass doors which lead into the garden from the house, from where they can observe her every move. 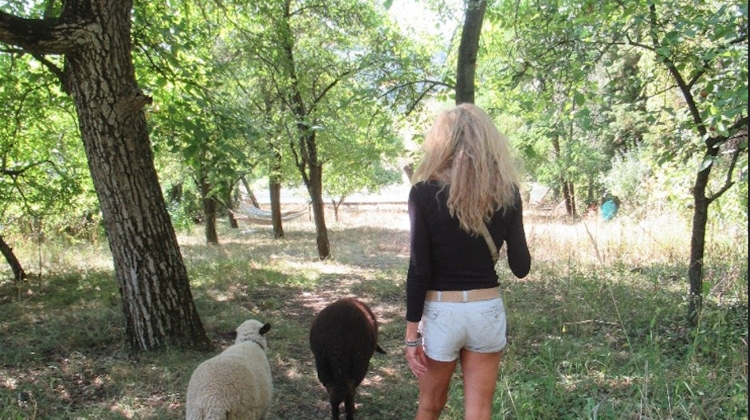 “I hadn’t consciously been wanting to have sheep,” laughs Kim. “But they were in the paddock next to my place across the road, and I’d gone out with my coffee one February morning and in among the sheep I saw a tiny lamb skipping about! They’re utterly adorable!

“Then my family of Ukrainians came, and for them the lambs were….well, they’d come from Mariupol, they were broken people. And every morning there was a new lamb, and the boys were talking to them through the fence.”

By the time the Ukrainians had moved on, Kim had decided to adopt two of the lambs, one black – Mahalia - and one white – Bailey-Rae. 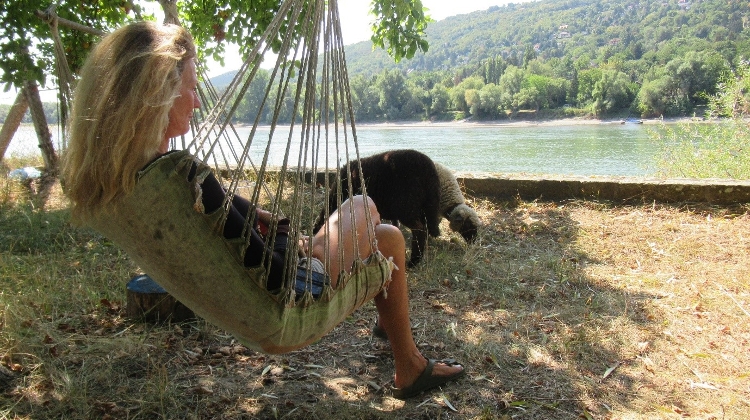 It is two years now since Kim left her job and started living full-time in the village, and she is feeling optimistic about her future. “I know now I can manage here by myself through the winter.

I’m not looking too far ahead. I went through a period where I couldn’t draw – I lost that for a few months. It was just too hard. But now I’m feeling energised with work.

“And I’ve got my Hungarian course,” she adds brightly, “I’ve just got to nail it! I’ve been here ten years and I just feel rude every moment I can’t pick up on what someone’s saying. And it’s such a beautiful language when I hear it spoken. I want to be able to do it!”

Kim has no intention of returning to England. “Hungary’s a fabulous place to live – for all the things that are difficult – beautiful cities, a fantastic river and areas of countryside, forests, deer…. Never. Never. No, I couldn’t, I love it here. It feels like my spiritual home.” 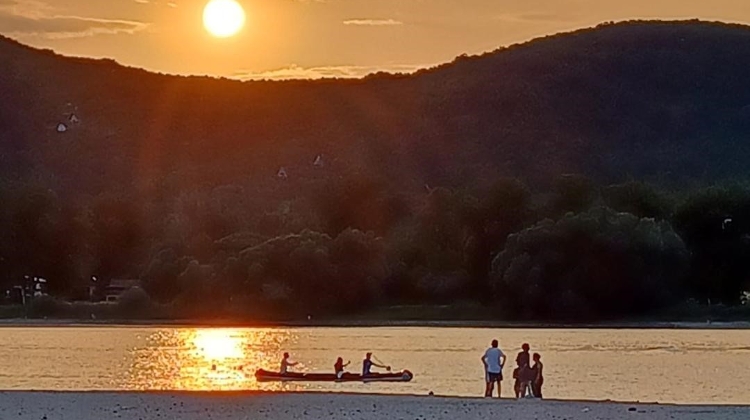