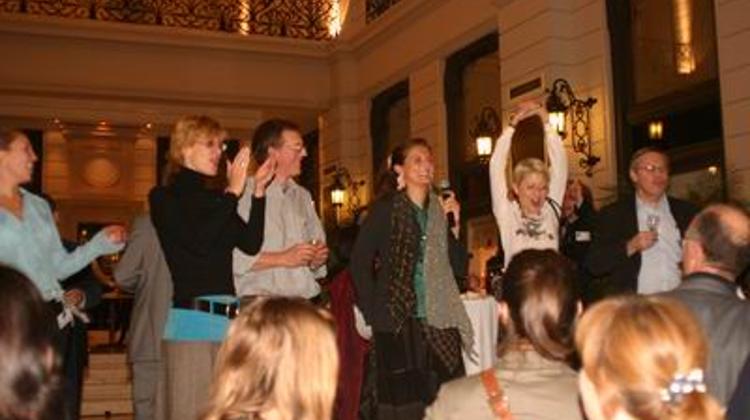 Wolfgang Christian of Presco attended the event as a new expat in town. He was enthusiastic about both the website and the birthday event, saying: "I came to Budapest a month ago, and one of the first people I met was Stephen Linfitt. His XpatLoop is cool. It helps, and really does what he says - it brings people together."

Another new expat, Michiel Egeler, General Manager of Brau Union Hungary, commented that he, “really appreciates what XpatLoop does”, saying, “the portal is really useful and this event is an excellent way to network, both for business and pleasure. I look forward to cooperating and partying together in future”.

XpatLoop.com celebrated its 5th anniversary with a lively bash sponsored by FirstMed Centers and the Corinthia Grand Hotel Royal on Thursday 16 November. A great group of portal readers, clients, and media partners gathered in the hotel's beautiful Atrium to commemorate the event with welcome drinks of Unicum, Zwack Palinka and fine wine, luxury finger-food, and interactive theatrical entertainment.

The program began, after a suitable warm-up for guests to eat, drink and socialise, with an Xpat Wine Club Quiz by Izabella Zwack. Guests were invited to join one of five groups, characterized by different grapes, and to address 12 fun questions in their teams. The quiz included items ranging from naming the number of wine regions to trivia challenges about Izabella's legendary great aunt, Maria Zwack the lover of great poet Hungarian Ady Endre.

After heated discussion and hushed conference, the teams presented their answers, with team "Merlot" coming in first place. "Kadarka" took second, and a third place tie between "Juhfark" and "Pinot Noir" was decided in favour of the former grouping after a recital of the teams' bonus question, which invited guests to come up with a quotation, slogan, or poem about wine – and team Juhfark came up with all three.

All the top three teams received both a bottle of wine, and a special Xpat Wine Club card providing a 20 percent discount at the Zwack shop in Pest. Jon Harman from MoveOne Relocations called Izabella "an ideal spokesperson for the Hungarian wine industry as a whole." He added, "The Xpat Wine Club and this quiz are great ideas".

Izabella herself commented that the quiz intended "to bring Xpats closer to Hungarian wine in a fun, relaxed manner without making it a lesson," by sharing information about "Hungarian wine regions, grape varieties, and the wines we distribute." Following the event Izaballa commented, “It's been great working together with XpatLoop.com in recent months and years”.

Next up on the event menu was a performance by Scallabouche, a local interactive theatre troupe. The actors sang joke serenades to "volunteer" guests, did impressions, and bounced around the performance area with exuberant, inspired lunacy. They ended the routine by mentioning they can be seen next at the Merlin International Theatre.

At the end of the stand-up performance, guests were treated to an enormous and decadent birthday cake thanks to the hotel, which guests really appreciated together with a glass of Tokaji. This completed the food line-up served by the hotel at the start of the evening to all those who arrived on time, which included: Blue cheese mousse and apricot, Thai chicken salad, Couscous salad with tuna, Chicken satay, Frittatas of smoked salmon, plus the Royal Chocolate Cake.

Shortly after cutting the cake, a business card draw provided over 30 lucky guests with quality gifts, including 10 high-value prizes from Gold's Gym, Budapest, Julie Molnar was one of the fitness prize winners. A few minutes later a second name card for Julie Molnar was also pulled ‘out of the hat’ unluckily for her as she wasn’t awarded another prize since guests were expected to only enter one name card into the draw - anyway she seemed happy enough with her free gift.

Arpad Foldi, a local XpatLoop reader, praised the party's "cosy atmosphere" and was happy to see both familiar and new faces there. He also praised the wines, "especially the Barát-szikla."

Long term local expat, Denis Volovik, is new to XpatLoop, said: "This is the first really great birthday party I've been to that is completely dedicated to a website, and I'm really excited to be here, it’s great!" He appreciated the Dreher beer sponsored by SAB Hungary.

Fellow expat Tayo Bineyen sent in this feedback, "I really had a swell time and I felt relaxed and excited.The food was good and so was the wine. By the way I also observed that I was the only African there. Keep up the good work and hope to see you some other time. Cheers!"

The event, apart from being a fabulous networking opportunity for guests, was also a philanthropic success. In lieu of an admission fee, guests were encouraged to contribute to United Way Hungary, with donations exceeding the target amount of 100 thousand forints thanks to everyone in attendance.

United Way local board member Willy Benko attended the event, explaining the charity redistributes funds to smaller charities, assessing their needs and following up on them after the distribution.. He said, "United Way would like to thank XpatLoop for helping to spread the word that charity is more important than some people realize."

Both direct and indirect feedback to the event was positive, here’s one final quote: “Great party last night. Congratulations on making it 5 years and building what I think is the best site for expats living in Hungary. Everyone I have spoken with who attended were very pleased.” Liam Crow