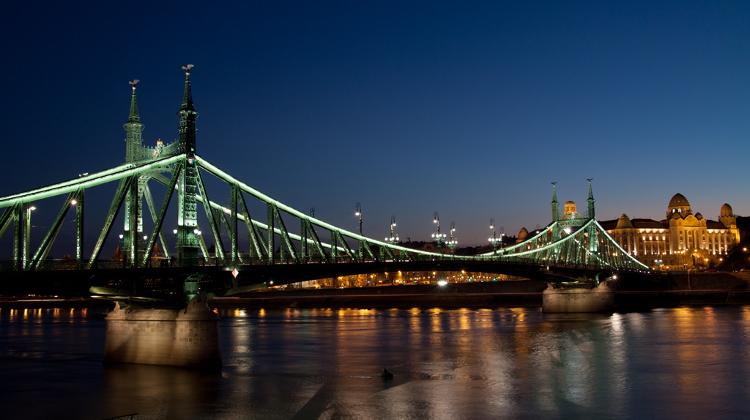 "Budapest citizens have a new reason to be proud, this iconic bridge as helped win a major prize for the Hungarian capital. On receiving the award, Mayor of District XVIII Budapest and the person in charge of Budapest cityscape and urban development said, “We are proud of this project not only because it provides the city with an additional jewel, but also because it is a true 21st century technical solution. With this new concept, we can save €100,000 yearly in the lighting of the bridge and its maintenance, as compared with traditional lighting products. I believe that this double effect has been honored by the Auroralia jury and helped Budapest to achieve the first prize”.

A group of Hungarian representatives travelled to Lyon to be present at the award ceremony on 8th December, and to bring the award to Budapest.

The representative group included responsible people of the project: Ughy Attila, Mayor of District XVIII Budapest, member of the Parliament and in charge of cityscape and urban development; Kiss Aniko, Senior advisor and lighting engineer at the municipality of Budapest; and the management of Tungsram-Schréder (the company that developed the LED luminaire for the bridge), represented by Hidvégi Edit, Manager Marketing and Communication, and Bjorn Brandt, CEO of the company.

The vision of the municipality of Budapest to beautify the evening scenery of Liberty Bridge goes back to many years ago. Until the inauguration of the Bridge in its new clothes, on May 28th 2009, a time of intense planning and work was to be accomplished. In order to visually underline the specifics of the structure of the Bridge, there was a need for very creative technical solutions. These were provided by two specialized companies: Lisys, Hungarian specialist for special lighting applications, and Tungsram-Schréder, market leader in outdoor lighting in Hungary, who developed a tailor-made solution to materialize the challenging project.

During the planning phase, a decision was made to use LED lighting fittings in substantial quantity for the first time in the scope of a major project in Budapest. This choice also enabled the engineers to create a lighting with a good uniformity on the 700m long vertical bands, and able to best render the original” mignonette green” color of the bridge, creating a perfect color effect also in line with the neighboring buildings and improving the night time cityscape overall.

Mrs. Kiss Aniko (Senior advisor and lighting engineer at the municipality of Budapest) describes this with the words: “The panoramic view of the city has been modified and improved continuously throughout the last 15 years as many buildings were provided with new lighting. However when looking at the city and from the hills, bridges and their impressive architecture were kind of left out of that picture. Except for the Chain Bridge, there was darkness above the Danube. We have been planning the Liberty Bridge lighting for more than ten years, and I am personally very glad to see that more bridges are now contributing to the city’s panorama. This project is an example for the future.”

In total, during the 4 months of installation, an amount of 584 LED light fittings were installed. The 1,6m long and 6cm wide light fittings were developed specifically for this project, and the company in charge, Tungsram-Schréder, gave its newborn baby an appropriate name: “Dunaled”. Bjorn Brandt, CEO of the company, underlines: “after more than a century in darkness, Liberty Bridge deserved to get the best lighting it could possibly get - in terms of look, quality, and cost efficiency.

Today, looking back at many projects of beautification which we contributed to in Budapest, we are especially proud of this achievement, as it reveals the true beauty of this architectural piece of art, while heavily reducing energy consumption and protecting the environment”.

Auroralia is a renown international award given each year to those cities which manage to come up with the best project in sustainable, energy saving and beautifying city lighting. With this success, Budapest follows up on Berlin, the winning city in 2009.

The Auroralia award highlights the three best initiatives in sustainable lighting implemented by cities. The award ceremony takes place each year during the prestigious Lyon Light Festival, and is supported by LUCI (Lighting Urban Community International), an international organization of 60 cities and 30 associated members who make the use of light a major tool in their urban development.

The Jury of this award is composed of independent international press experts from around the globe (e.g. from New York, Italy) representing diverse specialized magazines in urban lighting, town planning and environment. The main selection criterion is the minimization of the ecological footprint and the environmental impact of the lighting project through innovative solutions.

The jury primarily focuses on the following aspects : energy consumption, CO2 emissions, cost of the project, resources needed for the production of the lighting product, transportation, recycling possibilities, originality and beauty of the concept, life quality impact for the inhabitants, social and cultural effects, health protection, night landscape beautification, and also the inspiring character of the project for other cities.

Tungsram-Schréder Lighting Equipment Co Ltd. is Hungary’s leading outdoor lighting manufacturer with more than 1.5 Mio lighting fittings sold since its establishment in 1983. The company’s 68 workers and employees develop and produce, in Piliszentivan near Budapest, both functional and decorative lighting luminaries for public areas and urban spaces. The company’s premises include a modern factory, a large warehouse, a research and development facility and testing laboratory, and administrative offices of altogether 2.500m².

The company was founded on 16th June 1983 by the well-known Belgian outdoor lighting company Schréder (est. 1906) and two Hungarian enterprises, Tungsram and Hungarian Aluminium Industrial Trust. In 1990 the new American owner of Tungsram (G.E.) sold its shares, in 1997 Hungarian Aluminium Industrial Trust did the same, so nowadays the company is fully owned by Schréder and a couple of Hungarian private shareholders. The complete brand name “Tungsram-Schréder” was retained despite the detachment from Tungsram, and the company remained a true Hungarian manufacturer until today thanks to producing locally and working with around 200 Hungarian suppliers from whom the majority of purchases of raw material and spare parts are being made.

In 1999 the company acquired a major stake of the previously Szentendre based company “Kandeláber”, and merged it into its structure in 2004, hence widening its product range with Kandeláber’s famous traditional decorative poles and lanterns.

Today, Tungsram-Schréders’ product range covers a wide span of standard solutions, but also tailor-made traditional and modern ranges, and street furniture. Long lasting qualitative and economical solutions are the company's fundament for a solid partnership with its customers, whose satisfaction and confidence have been the cornerstones of the company’s success and growth.

Continuous quality is ensured at the ISO and CE mark certified company by the selection of the best raw materials available, and by monitoring its products with the help of a state-of the art laboratory. All Tungsram-Schréder luminaries are “sealsafe”, including a hermetically closed optical compartment protected from dust and water and substantially reducing maintenance cost. While being well designed, products are mechanically strong and durable, economical and energy saving.

Besides pure business aspects, Tungsram-Schréder follows a vision of “beautification”, aiming to have its engineers and designers make cities and urban places look more attractive. Major references of Tungsram-Schréder have made an essential contribution to the world famous lighting of Budapest – Andrássy street, the Opera, the Castle District, the central Bridges of Budapest, and many more. In 2009, Tungsram-Schréder materialized, with Liberty Bridge, the first major project in Hungary using the new LED lighting technology, hence positioning the company in a leading position within a changing market environment.

2010 was a successful year for Tungsram-Schréder, as its turnover grew despite the impact of economical crisis."