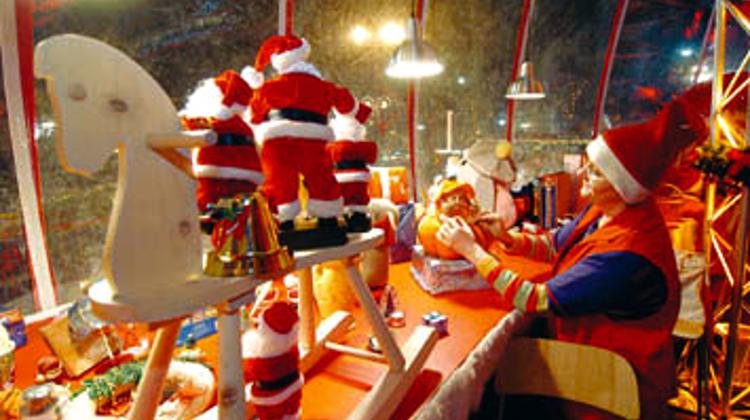 MikulásGyár is open between 9 and 19 December (10am to 10pm) in 2010 for the sixth time at Felvonulási Tér to collect donations in order to offer a Merrier Xmas for 200.000 children. Helping needy families and children is the plan in 2010 as well at this 10-day-long humanitarian event.

As the newest surveys show that in Hungary the number of undernourished children can reach 200.000, the organizers of MikulásGyár in cooperation with the Hungarian Red Cross (Vörös Kereszt) aim to collect more offerings than in any of the other previous years. In Hungary now Red Cross has the most up-to-date and detailed database about the families who encounter problems in daily living.

Last year MikulásGyár managed to deliver 133.000 parcels for the people in need, though now the aim is to reach the magical number of 200.000. MikulásGyár welcomes foodstuff like cans, pasta, flour, sugar, oil, and cosmetics, detergents, or sweets (as these are needed primarily) but second-hand toys and books in good condition are expected as well. The donations should not necessarily be wrapped up or put in parcels as the volunteers at MikulásGyár can do that.

One of the novelties this year is that the aids cannot only be brought to Felvonulási Tér but to 13 other shopping centers in cities like Budapest, Székesfehérvár, Debrecen, Győr, Szeged as well. Moreover, at every post office in the country the packages are accepted free of charge and delivered to Red Cross if MIKULÁSGYÁR is written in capital letters on the wrapping.

The organizers have created a truly spectacular Advent Fair near Városliget with a huge range of programs for the visitors. The exciting agenda includes all kinds of music concerts in the early afternoon for children and in the evening for adults, a Xmas Fair and last but not least, a free skating ring.