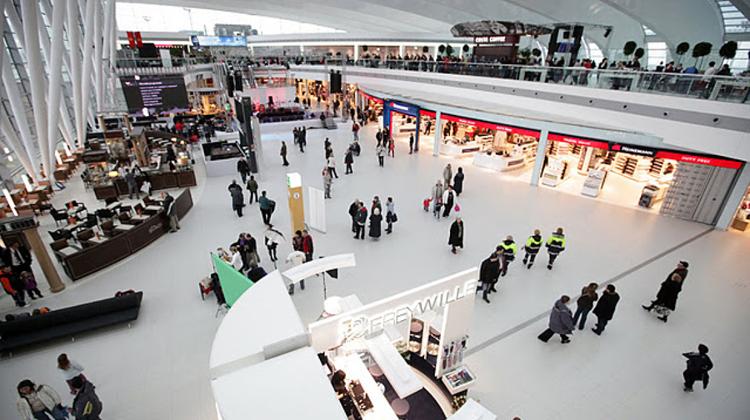 "Budapest Airport registered an amazing 8.9% traffic increase last year and recorded an all-time high of 8,920,653 passengers. Thus the 2007 record of 8.6 million has been surpassed by 320,000 passengers arriving and departing from the terminals of Budapest Airport.

2011 was a crucial year for the capital airport of Hungary in many ways; with the opening of the SkyCourt, the new Terminal 2 building, the arrival of a series of new airlines and the opening of new destinations, the airport has made every effort to become a leading gateway in Central and Eastern Europe.

Budapest Airport recorded a higher traffic increase in 2011 than the European average. According to international statistics, air travel across European airports increased by 7%, whilst Budapest Airport registered 8,920,653 passengers, or a 9% increase from 2010 (with 8.2 million passengers). This number is 323,516 more than in the earlier record year of 2007.

Budapest Airport made every effort to attract new airlines and to open new destinations in the past year. Qatar Airways launched its Doha-Budapest flight in January 2011, and the service went daily in September due to ever-increasing demand. American Airlines was a newcomer to the Hungarian market by starting daily JFK-Budapest service from April this year.

The Baltic region became available for travelers from Hungary in May, when airBaltic started 4 weekly flights from Riga to the Hungarian capital. Another new route was opened by Jet2.com, connecting the heart of Scotland with Budapest in June with the launch of its popular Edinburgh flight. Last but not least, the Swiss SkyWork Airlines started flights between Bern and Budapest at the end of the year, thus increasing the number of Swiss cities on the destination map of Budapest Airport to four (after Zurich, Basel and Geneva).

“We are determined to carry on with our ambitious plan to turn Budapest Airport into the leading hub in Central and Eastern Europe in terms of traffic growth and service quality,” commented Jost Lammers, CEO of Budapest Airport. He added: “Our aim is now to consolidate what has been achieved so far and to carry on implementing our plans for the future.

The past four years since the privatization of the airport have proved to be successful; we continued our airport development and investment plans even during the most difficult times of the world financial crisis. This is now starting to pay off, and we can offer much higher service standards for our passengers and have increased efficiency in all respects of airport operations. We look forward to welcoming additional airlines and destinations in 2012 to further enhance the customer experience”

Full service airlines such as Lufthansa, British Airways, KLM, Air France, Swiss, Turkish Airlines and many others have been the main drivers of the traffic increase. Increases in flight frequencies, aircraft size and seat load factors have contributed to such strong growth. This segment recorded a 19.6% increase in passenger numbers versus 2010.

There was a significant increase in the area of long-haul flights; the 44% increase can be attributed to Qatar Airways and American Airlines, while Delta and Hainan remained strong market players in Budapest.

Malév Hungarian Airlines improved its performance rapidly in Q4 of 2011 and carried 200,000 more passengers than 2010, whilst the number of transfer passengers increased by more than 8 %. In total, transfer passengers accounted for 17 % of all passengers at BUD. The low cost carrier segment continued to grow, taking advantage of Wizzair’s 4th aircraft based at BUD for the full year in 2011.

Budapest Airport has been striving to become the region’s leading aviation hub for years. The biggest project realized to this end was the opening of the SkyCourt, the new Terminal 2 building with an investment of 100 million Euros. This has substantially increased the passenger capacity of Budapest Airport and has also increased travel comfort, food and beverage services and shopping facilities at the airport.

This has been reflected in quarterly passenger satisfaction surveys, showing a giant leap in the assessment of service levels provided by the main Hungarian airport for travelers. With the opening of the SkyCourt, a brand new computerized baggage handling system has commenced operation in Budapest, and the passenger security capacity has been more than doubled with 12 new departing lanes opened and 2 more added to the existing 4 in the transfer area.

Budapest Airport is continuing its BUD Future development program in 2012. In the spring, construction works will start on the new Cargo City phase I, comprising an 11,000 square meter state-of-the-art logistics/warehouse facility along with 4500 square meters of offices. Budapest Airport will also commence the construction of a brand new engine test stand near the Lufthansa Technik hangar. This investment will help to reduce ground noise for the communities living around the airport."