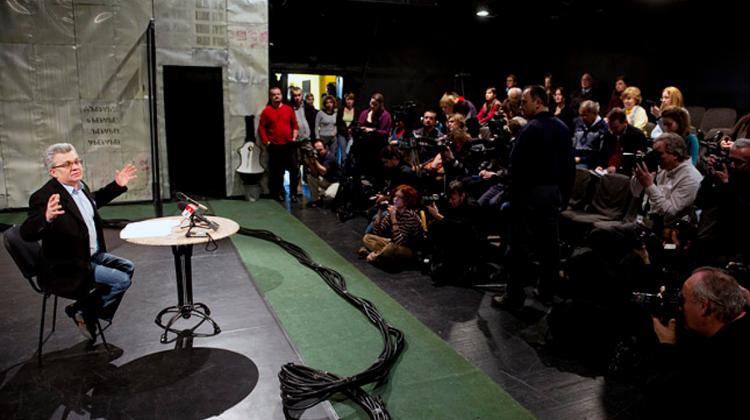 "The Federation of Hungarian Resistance Fighters and Anti-Fascists is organising a demonstration today on Paulay Ede utca outside the Új Színház theatre, where György Dörner is taking over as director. Dörner had said he would work in tandem with the openly ant-Semitic István Csurka, drawing condemnation from arts groups in Hungary and abroad.

Far-right groups such as the 64 Counties Youth Movement, the Új Magyar Gárda, the Magyar Nemzeti Gárda and the Betyársereg will stage a counter-demonstration in favour of Dörner elsewhere in downtown Budapest.

Dörner took over as director of the Új Színház Tuesday morning.

Márta said a representative from City Hall, the theatre’s lawyer, finance director and manager, as well as Dörner and his team took part in the transfer.

Márta and the Új Színház troupe then left for a guest performance in Novi Sad, Serbia.

Dörner said the transfer took place in an orderly fashion.

Incoming chief director Zsolt Pozsgai said it is a problem that the entire troupe left for a guest performance, which means they will have to begin work in an empty theatre.

A meeting with the troupe is scheduled for February 8."