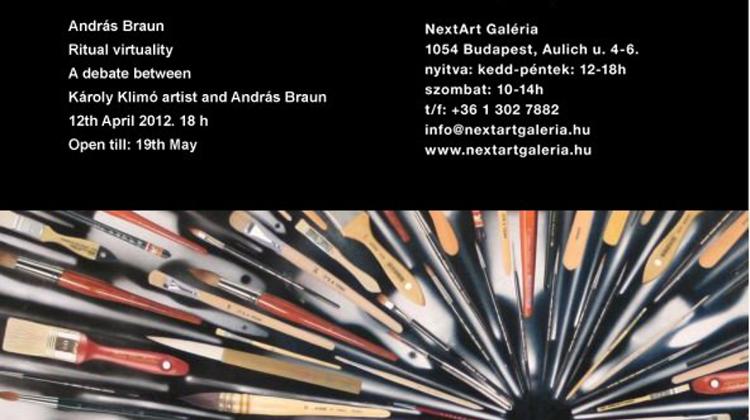 András Braun uses forms of art that he himself has experimented with, alongside with techniques that have been popular for the past 50 years. There are dripping expressionist ideas, often combined with the Pollock spraying manner Op-art rhythmical recurrences, alongside spiral lines, complemented with different street artistic touches. Pop-art placards employed within the work further enhance the effect of the spray.

The picture is created to be a puzzle for our visual perception, not only through the sight presented, but the materials used as well, some of which even possessing creative titles through the use of puns, as in the case of Fat Burner.

Plays with the kinds of the paint, being in contact with other substances, through different chemistry effects, runs, drains away, spawns, and splashes. He blows water drops onto the oiled and lacquered surface with a special tool, thus creating a specific texture with the final touch of spraying it.

The water drops represent the masking of the work. The selection of colour layers may appear to be selected at random and simply, uncontrollable, which with the added paper mache create the optical effect for the viewer that the artist desired.

The exhibition at NextArt gallery for Andras Braun, awarded by both the Ludwig and Soros institution, is a first glance at a new chapter of a fruitful oeuvre. One of his main interest for his works, the creation of optical illusions, has been combined with paper based ideas, ever since he received the Frankfurt scholarship in 2000.

Even though he is a painter, he does not paint as according to the technical definition. Through Ritual Virtuality he reflects upon seemingly rarely used, but never forgotten techniques as basic tools for painting. The tools chosen are an eternal topic for an artist as he explores new dimensions through experimenting with their capabilities.

In the pictures getting to an exhibition now the square apart from a format, the technical variegation, it gets the community, that after the trace left on the linen first, the picture dictates ignoring my sketches quasi already only. After some head hot haste, I do not have an other thing recalling the inner picture that I know already in the continuation, than to fling into the given direction.

Not as if, the violence would have been my working method till now, would not have taken shape that is alchemist method, what is the one with a different base and solution substances lets it work. I see so with my fantasy solid as a rock not broken always yet, this surrounds, I can show it so, to project, some that let something else be allowed to find out his similar visual inner pictures.