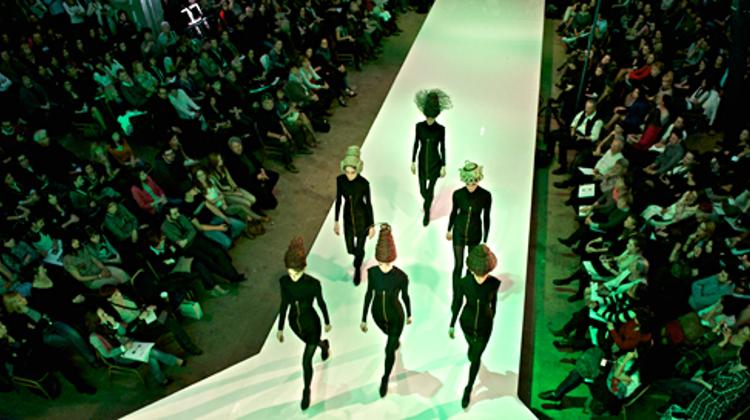 "A dress designed by a young architect sewn from tiny wooden slats inspired by Hungarian folk architecture won the Rethink/re-button! Magyar is the Mode Contest contest invited for the second time by Design Terminal, a background institution of the Ministry of Public Administration and Justice. A record number of 1000 entries were submitted this year.

The purpose of this unique contest organised on the basis of international models was to combine traditional Hungarian motifs with the latest trends in fashion. The contest was closed with a highly successful fashion show attracting thousands of visitors on 31 March 2012 where a jury comprised of reputable fashion experts decided on the winners.
Photo: Gergely Botár

The first Rethink/re-button! Magyar is the Mode contest and fashion show were organised in the spring of 2011 as a priority cultural event of Hungary’s EU Presidency. Last year, almost 450 contestants converted historical Hungarian dress code values and motifs into contemporary forms following the latest trends of international fashion.

The event did not only launch a number of talented young designers on the path of market success but also attracted the attention of several influential international media to creative enterprises in Hungary.

This year, contestants were able to submit entries in two categories. While as part of the Contemporary Clothing Design contest, designers were invited to convert historical Hungarian dress code motifs and values of their choice into contemporary forms of clothing, in the Design and Tradition category, contestants were required to submit individual items of clothing made with traditional craftwork techniques or from traditional materials on the basis of pattern designs pre-prepared by young Hungarian fashion designers.
Photo: Gergely Botár

Amongst the entries submitted in the two contest categories, there were Matyó-style pieces, items with motifs borrowed from the Busó Festivities, an end-of-winter carnival custom in the South of Hungary, and clothes inspired by the craft of shingling.

The winner designer, Anett Farkas won the main prize with her collection entitled Shingles, one of the basic elements of traditional Hungarian architecture. The skirts resemble the shape of a yurt, while the clothes also reflect influences from the renowned Hungarian architect Imre Makovecz. The awarded winner received a cash prize of HUF 1.1 million and may present her works on the front page of Marie Claire’s five-year birthday issue and also at the Marie Claire Fashion Days.

The winners of the Design and Tradition contest received cash prizes of HUF 400,000 and may spend six months as apprentices in the workshops of the Katti Zoób and Attitude brands.
Photo: Károly Árvai

Ilona Hendzsel and Móni Nagy were the winners of the contemporary category of best accessories, while Alett Somogyi received the number one prize in the Design and Tradition contest. The prize for best accessory in this category was awarded to Anna Vitányi."