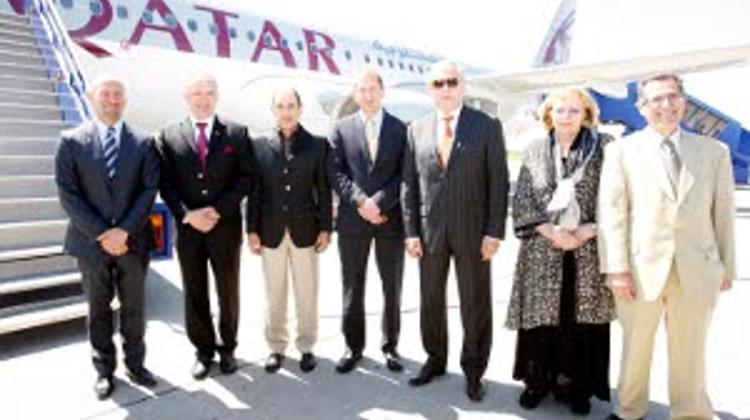 "Qatar Airways today celebrated the launch of its 30th European destination with daily scheduled flights to the Croatian capital Zagreb.

A traditional water salute at Zagreb Airport marked the arrival of Flight QR947 from Doha, the airline’s capital in the State of Qatar. The new route, operated via Budapest, also represents the first passenger flight to Croatia from the Gulf region.

Qatar Airways Chief Executive Officer Akbar Al Baker travelled on the inaugural service along with media from Asia, a key source market for the airline to its latest European gateway.

Local dignitaries from the airport and political and business circles attended this afternoon’s airport arrival ceremony in Zagreb.

Following route launches to Azerbaijan and Georgia in February, and last year’s European expansion drive which saw Qatar Airways start services to seven destinations across the Continent – almost half the 15 new routes inducted in 2011 – the addition of Zagreb today strengthens the carrier’s footprint in Europe.

Addressing guests at the ceremony, Al Baker said he was delighted to celebrate Qatar Airways’ long-awaited arrival into Croatia.

“Our new daily air link between my home city of Doha and Zagreb is further testament to Qatar Airways’ commitment to expanding our presence in Europe,” he said.

“Over the past 18 months we have grown our footprint significantly in Europe, and I am very pleased to say that today Zagreb becomes Qatar Airways’ 30th destination on the Continent, 114th overall worldwide and first route linking Croatia with the Gulf.

“Croatia, with its flourishing tourism industry, remains a popular destination for travellers from the Middle East, Asia Pacific and beyond. With our new service, we look forward to making it easier for travellers from around the world to fly to Croatia without having to connect through busy European hubs,” added Al Baker.

He said: “Croatia also presents many development opportunities for our two countries and we are very proud to bring our award-winning service to this great country.

“Whether it’s Bangkok, Dubai, Shanghai or Manila, our seamless connections from Zagreb to the East, via our Doha hub, will provide holidaymakers and business travellers from Croatia with a wider network of destinations to choose from.

“We look forward welcoming travellers from Croatia to enjoy our renowned five-star service both in the air and on the ground.”

Zagreb Airport General Manager Tonči Peović added: “We are happy and proud that Zagreb today became part of the network of destinations of Qatar Airways. The carrier is one of the leading airlines in the world, a welcome partner to every airport, and we see their arrival as the confirmation that our airport is on the right course of development. Establishing this transport link, along with the opening of a new Croatian embassy in Doha, will provide a platform for improved economic and tourism cooperation between the two regions and two cities.“

Qatar Airways is operating an Airbus A320 in a two-class configuration on the Zagreb – Doha route, with 12 seats in Business Class and up to 132 seats in Economy. Each seat offers an interactive audio and video entertainment system featuring hundreds of movies, TV programmes and music channels.
General Module Image

In addition, passengers can remain connected with friends, business associates and loved ones on the ground with an SMS text messaging service using their mobile devices.

Qatar Airways’ aggressive expansion during 2012 continues with a host of new routes, including Perth, Mombasa, Kilimanjaro and Yangon, the latter marking a re-entry to Myanmar after a four-year absence.

About Qatar Airways
Qatar Airways currently has orders worth over US$50 billion for more than 250 aircraft, including Boeing 787s, 777s, Airbus A350s, A380s and A320 Family of aircraft. Skytrax is the only global independent passenger survey monitoring airline standards and is considered the ultimate benchmark for excellence in the airline industry.

In addition to winning Skytrax’s prestigious Airline of the Year 2011 award last summer, Qatar Airways was named Best Airline in the Middle East for the sixth year in a row, and its Premium Terminal at Doha International Airport was named Best Premium Service Airport Terminal for the second consecutive year in 2012. "