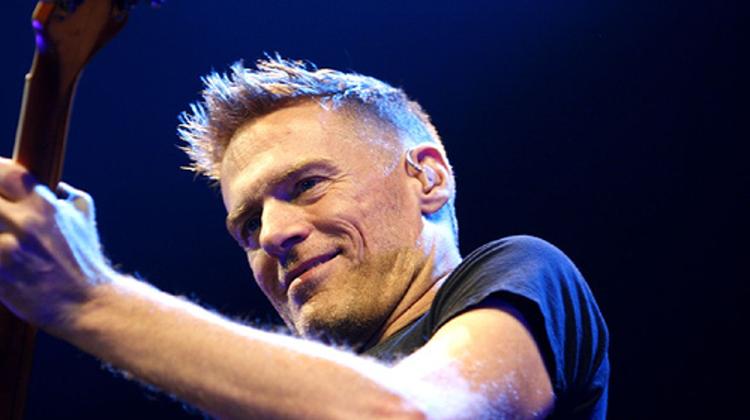 Bryan Adams is one of the world’s most highly acclaimed singer/songwriters and Canada’s #1 ambassador. In a career that has spanned more than three decades Adam’s signature voice and sound has sold over 65 million records; he has toured 6 continents and continues to push those boundaries, becoming the first westerner to play in both Pakistan and Vietnam. He has achieved #1 status in over 40 countries around the world.

Adams solo career was launched with the release of his self-titled debut album Bryan Adams in February of 1980 on A&M Records. Adams had already been touring, recording demos and working as a studio musician paying his rent for a few years, but it was when Adams formed a song-writing partnership with drummer Jim Vallance that things started to happen.

The first album was not initially released in the U.S. (although “Hiding from Love” was issued as a single and reached No. 43 on the dance chart), so Adams assembled a backup band and embarked on his first Canadian tour as a solo act, spending four months playing clubs and colleges. The tour was to be the foundation for his second album, You Want It, You Got It, which was recorded in NYC in two weeks and released in the spring of 1981.

The original album title was Bryan Adams Hasn’t Heard Of You Either but that title was rejected by A&M as being too provocative. This 2nd album became Adams’ first ‘official’ release in the U.S. He toured America for six months, opening for the Kinks and Foreigner and by January of 1982 the album broke into the Billboard charts peaking at No. 118 in 13 weeks. The single “Lonely Nights” became his first Hot 100 entry at No. 84 and peaked at No. 3 on the mainstream rock chart.

His third album, Cuts Like a Knife was released in January of 1983, with the single “Straight from the Heart”, leading the way. It broke his career open, peaking in the Top Ten of the Hot 100 and setting up the LP, which followed. The album also reached Top Ten, selling platinum and spawning further Top 40 hits with the title song and “This Time”. The album’s success was stimulated by Adams’ extensive touring in support of it, which began in Canada and continued into the U.S., where he opened for Journey.

From there he toured Europe followed by dates in Japan and then back to Canada.

Adams’ fourth album Reckless was released on his 25th birthday, November 5, 1984, and was preceded by the single “Run to You”, which reached the Top Ten. It was followed by no less than five Top 20 singles drawn from the album:

“Somebody”, “Heaven” (which hit number one), “Summer of ’69″ (Top Ten), “One Night Love Affair”, and a duet with Tina Turner, “It’s Only Love”. Reckless reached No. 1 in the U.S. selling five million copies in America and a reported three million more in the rest of the world. Adams also earned his first two Grammy nominations, Best Male Rock Performance for the album as a whole, and Best Rock Performance by a Duo or Group for “It’s Only Love”. As per usual, Adams toured extensively in support of it. His “World Wide in ’85″ tour began in December of 1984 finally wrapping in November 1985.

One of the highlights that year included being the first artist to open the American side of the Live Aid concert from Philadelphia on July 13th. Into the Fire, followed in March of 1987, prefaced by the single “Heat of the Night,” which became Adams’ fifth Top Ten hit in the U.S.

The album reached the Top Ten in the U.S. and sold a million copies, with another million sold overseas. It also spawned the Top 40 hits “Hearts on Fire” and “Victim of Love”. Adams’ worldwide tour in support of the album went on for more than a year. One of the final shows, in Werchter, Belgium, was filmed for a television special, “Bryan Adams: Live in Belgium”, broadcast in Canada the following year. Live! Live! Live! a concert album drawn from the 1988 Belgium show, was initially released only in Japan but later garnered a wider audience.

In a departure from earlier years, Adams did not tour extensively but opted to spend his time in England with writer/producer Robert John “Mutt” Lange, preparing for his next album. In June of 1991, Adams went back on the road in Europe co-headlining with ZZ Top.

This coincided with the release of the single “(Everything I Do) I Do It for You” which topped the U.S. charts for seven weeks – the longest any song had remained at No. 1 in eight years. Its international success was even greater; spending 16 weeks at No. 1 in the U.K., making it the longest-running chart-topper in the history of the British charts.

Waking Up the Neighbours was released in September of 1991, and Adams once again hit the road – this time until July of 1993. The album featured two Top Ten hits “Can’t Stop This Thing We Started” and of course, “(Everything I Do) I Do It for You”. Before it finished running its course there would be three more Top 40 hits, “There Will Never Be Another Tonight”, “Do I Have to Say the Words?” and “Thought I’d Died and Gone to Heaven”.

Waking Up the Neighbours sold four million copies in the U.S. and another six million in the rest of the world. It also earned Adams a Grammy nomination and his first Academy Award nomination.

Adams began to look forward to his next studio album, but in the interim released a hits compilation, So Far So Good, in November 1993 featuring the single “Please Forgive Me,” a new Adams/Lange track. The song would also find its way into the Top Ten. Then came the Adams’ theme song for the movie The Three Musketeers, “All for Love”, recorded with Rod Stewart and Sting, which hit No. 1 in the U.S. in January of 1994.

That same month, Adams embarked on an ambitious tour of the Far East, including countries like Vietnam that were rarely visited by Western pop artists. Throughout the better part of 1994, Bryan kept a low profile with the exception of a song called “Rock Steady” written for Bonnie Raitt’s live album Road Tested. He performed the song as a duet with her, and the two soon shared a chart single.

At the beginning of 1996 Adams released a new album 18 ‘Til I Die. The album featured the flamenco-tinged “Have You Ever Really Loved a Woman?” from the Johnny Depp/Marlon Brando film Don Juan DeMarco. Adams was rewarded with yet another No. 1 hit, as well as a Grammy nomination for Best Male Pop Vocal Performance and his second Oscar nomination for Best Song. An 18-month world tour followed and the album soon went platinum in the U.S.

The singles “Lets Make A Night To Remember” charted briefly in the Top 40 and the provocatively titled “The Only Thing That Looks Good On Me Is You” proved to do well outside of the US, but didn’t dent the US charts, perhaps due to the fact that his record company (A&M) transferred his contract in the middle of the release to independent rap label, Interscope Records. Adams filmed an appearance for MTV’s popular Unplugged series in the fall of 1997, and it was released as an album in December. It was a modest success, and served as a stopgap until the appearance of his next studio album, On a Day Like Today, which was released in October 1998.

Overseas, the disc featuring the Melanie C duet “When You’re Gone”, reached the UK No. 3 spot in December of 1998 and spent 10 weeks in the Top 10. This was followed by the Top 10 dance re-mix of “Cloud Number Nine”. The album also hit No. 3 in Canada. In November 1999, Adams issued a second hits compilation, The Best of Me, but the American branch of A&M/Interscope declined to release it. The title track “The Best Of Me” charted all over Europe and in Canada.

Adams returned in the spring of 2002 collaborating with Hans Zimmer on his first full-length song score for a film, the animated DreamWorks feature Spirit: Stallion of the Cimarron. The soundtrack made it into the Top 40 and Adams and Zimmer earned a Golden Globe Nomination for their collaboration.

In September of 2004, Room Service was released in Canada and Europe where it debuted at No. 1 on the Billboard European Top 100 albums Chart. This was shortly followed by its release in the US in the spring of 2005.

In the fall of 2005 Bryan Adams celebrated his 25th anniversary as a recording artist with his first two-CD collection Anthology, the biggest retrospective of his multi-platinum career. The 36 selection Anthology spanned Adams’ career from 1980 through to 2005, offering the very best of one of the most popular rock singers of our time.

Last year Bryan was inducted into Wembley’s Square of Fame. The ceremony coincided with his 25th show at Wembley and the anniversary of his first performance at the Stadium, when he headlined The Prince’s Trust Charity Concert in the summer of 1987.

Adams’ continues to tour 120 days a year and this March for the launch of his 11th studio album, he will take to the road for a unique ‘11 concerts, 11 cities’ tour, taking in 11 different countries in just 11 days. The special performances at some spectacular venues will see Bryan perform an intimate acoustic set.

The new album 11 is packed full of unmistakable rockers and signature ballads. From the uplifting “Broken Wings” to the sultry “Mysterious Ways” to the anthem-like “Something To Believe In” [that boasts a chorus that should fill stadiums across the world], Bryan’s 11th recording of original material is yet another milestone in a career that has spanned two and a half decades.

Whether it is the plaintive guitar solo in “Oxygen” or the reflective strains of “I Ain’t Losin’ The Fight,” the songs hold the listener and transport them, underscoring once again why Adams is in such demand as a songwriter and concert performer. 11 is destined to bring new live favourites to the stage that would easily sit alongside Adam’s extensive catalogue of greatest hits.