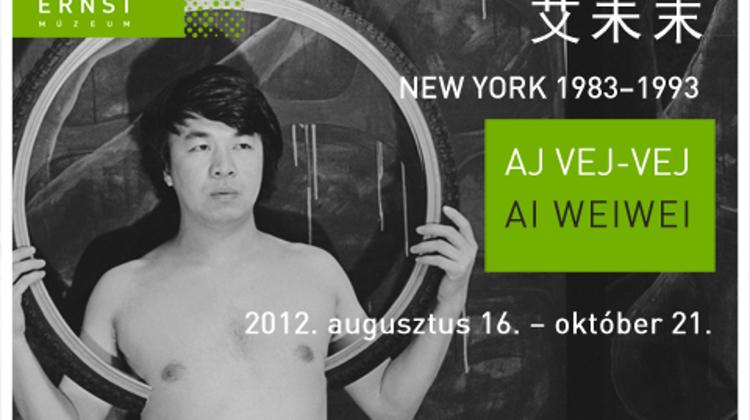 Ai Weiwei is probably the most influential contemporary artist of our times. Ernst Museum, which is celebrating the 100th anniversary of its founding this year, organises an exhibition of the Chinese artist’s photos made during his New York years.

Ai Weiwei (1957 Beijing) is a versatile artist with a conceptual orientation, a critical observer of social conditions, who became the most well-known artist worldwide in the last few years. As an architect, conceptual artist, sculptor, photographer, blogger, as an artist active on Twitter as well as in making interviews and practicing cultural criticism, he is always a sensitive observer of contemporary social issues. He is excellent at communication and building relationships, an artist who breathes life into one’s ideas about the role of art.

Ai Weiwei was born in 1957 as a son of the poet Ai Qing. He studied at the Beijing Film Academy, after which he co-founded the art group Stars in 1978. The group rejected socialist realism, the dominant trend of Chinese culture at the time, and advocated an experimental approach to art. As a result of improving Chinese-American relations, he travelled to the United States in 1981. In 1983 he enrolled the Parsons School for Design in New York, and studied under the supervision of the painter Sean Scully. It was also in New York that he met the work of Allen Ginsberg, Jasper Johns, Andy Warhol and Marcel Duchamp.

During this period Ai Weiwei mainly created paintings, but these years also saw the emergence of his first ready-mades and thousands of photographs documenting the everyday life of the Chinese colony and himself. In 1993, when his father became ill, he returned to Beijing. In the next four years he became co-founder of China Art Archives & Warehouse (CAAW) and also began to deal with architecture.

He opened his own studio in Caochangdi in 1999, to be followed by the founding of FAKE Design architecture studio in 2003. In the same year, together with the Swiss Herzog & de Meuron architecture studio, he played a key role in developing the concept of the “Bird’s Nest,” the Beijing Olympic Stadium, which has become the new symbol of the city since then. (Later he left the project.) As part of his contribution for Documenta 12 in 2007, he invited 1001 Chinese visitors to Kassel (Fairytale), while in 2010, in London’s Tate Modern he placed a huge carpet made of millions of hand-painted sunflower seeds on the floor of the institution’s so-called “Turbine Hall.”

Ai Weiwei is probably the most well-known Chinese name today – outside China. As an artist in opposition of the Chinese government, and highly critical of the peculiar local social circumstances, he still works under police supervision in his Beijing studio. The Chinese authorities do their bests to hamper his work: he cannot leave the country, he is under the constant surveillance of a house arrest, and his contact with others is strictly controlled.

Ai Weiwei, who is often quoted abroad, has embarrassed the Chinese leadership many times with his works sharply critical of the existing communist power. In response, in 2011 he was arrested, but as a result of the ensuing strong international protests and diplomatic intercessions, he was released. However, the Chinese authorities make his situation as difficult as they can: on the grounds of certain administrative failures of the building process, they had his Shanghai studio, finished in 2011, demolished.

During his studies and stay in New York, Ai Weiwei took more than ten thousand photos about himself, the city and its inhabitants. With his camera in hand, he obsessively tried to document all the important, less important and banal events and characters around him. He experimented with several equipments and technologies from the simple analogue camera used by tourists to Polaroid. These photos capture the history, culture and atmosphere of New York in the 1980s from an extraordinary perspective.

“The New York that I used to know does not exist any more… If I look back to the past, I see that these photos are factual but not necessarily true. The present always overwrites the past, and the future does not care about the present…” Ai Weiwei, 2008.

At that time, as an unknown Chinese artist at the beginning of his career, Ai lived in a tiny apartment in East Village, New York, a poor and bohemian quarter of Manhattan, where he was a prominent member of the expatriate Chinese community of artists and intellectuals, the burgeoning avant-garde scene of the neighbourhood. During this time the camera was a tool for Weiwei to record his own life, work, surroundings and the general atmosphere of the times.

The photos represent a well-definable period of New York through Weiwei’s eyes, and they clearly show the signs of his emerging conceptual approach. The represented objects include East Village poetry readings and other art events, demonstrations at Tomkins Square Park, the transvestites of Wigstok, famous Chinese artists and intellectuals (such as the filmmaker Chen Kaige, the composer Tan Dun, and the artist Xu Bing).

Ai Weiwei photographed everything interesting and uninteresting in the American city, almost everything that came his way. Among these photos, one may find composed pictures as well as spontaneous, randomly recorded scenes. This hybrid quality of Ai’s experience and representation of reality – partly direct, alive, partly manipulated – implies a firm conceptualist attitude, just like his willingness to turn any subject into a picture/artwork/photo/subject-matter besides the conventional topics of photographical genres.

Weiwei, operating like a living eye, documents and presents his own existence and being-there through these pictures. On basis of his rich series of photos one may easily reconstruct life at the foot of the twin towers a quarter of a century ago. The 227 exhibited photos were chosen by Ai Weiwei himself from his private archives. The concept of the exhibition is based on the idea to create a museum installation made entirely of pictures that explore Ai’s personal experiences, thoughts and attitude at the time.

So far, Ai Weiwei’s photographs of his New York period have been exhibited in Berlin (Martin Gropius Bau) and Moscow (Media Center). From August till October the pictures of the exhibition curated by the artist himself are going to be exhibited in Budapest.

Starting from September 2012, a new comprehensive catalogue published by Distanz Verlag will be available for our customers, including an additional Hungarian supplement of the catalogue prepared by Kunsthalle Publishing House.

On display until 21 October