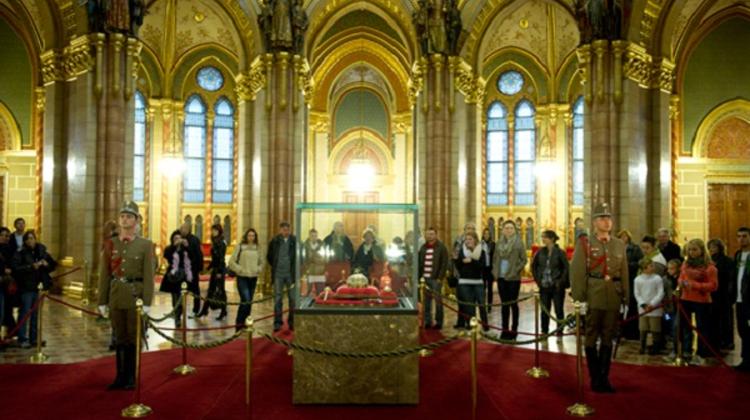 In continuation of the tradition launched two years ago, the House of the Nation, the Parliament Building will be open to visitors on the 20 August national holiday also this year. Visitors may enter the building of Hungary’s legislature between 1.00 p.m. and 8.00 p.m. where they may view the grandiose Ceremonial Staircase in the building, the Cupola Hall of Parliament and the Holy Crown guarded by the Crown Guards of the Defence Forces. Visitors may enter the building via Gate XII. No prior registration is required; entrance is free for everyone.

Description of the Parliament Building

The Parliament Building is deservedly ranked as one of the world’s most beautiful parliament buildings. However, for us, Hungarians, it is not just an historical monument that fills us with pride but is also a symbol that is full of life. It is the ceremonial custodian of the Holy Crown, is home to Hungary’s legislature and is, perhaps, one of the world’s most beautiful workplaces.

Visitors may enter the building via Gate XII. The main entrance opposite the Ceremonial Staircase opens from Kossuth tér which is only open on festive occasions; upon the visits of heads of states and prime ministers and on the occasion of state ceremonies. By reaching the first rest area, we immediately spot the columns that support the ceiling of the ceremonial staircase hall, and in particular, the 8 dark red granite columns that are 6 metres tall and weigh 4 tonnes. They originate from Sweden, and each one is a single piece of stone. There are only 12 columns like these in Europe; the other 4 are in the Houses of Parliament in London. Ninety-six stairs lead to the Cupola Hall in total.

The ceiling frescos represent the important main message of this historical site: the glorification of Legislature and Hungary. Between the two paintings, one may see the middle coat of arms of the former Hungarian State, that is, the united coat of arms of the countries of the Hungarian Holy Crown (Dalmatia, Croatia, Slavonia, Transylvania, Fiume and Hungary). One of the era’s greatest Hungarian painters, Károly Lotz was commissioned to create it. The four pages on the columns hold replicas of the coronation regalia in their hands.

Opposite the main staircase, we may see Chief Árpád and King St. Stephen. Proceeding to the right, we may observe the images of the following Árpád House rulers: St. Ladislaus, Coloman the Bookish, Andrew II, Béla IV. They are followed by Louis the Great, János Hunyadi and Mátyás Hunyadi. In turn, they are followed by four Transylvanian princes: István Báthory, István Bocskai, Gábor Bethlen and György Rákóczi I. Finally, three Habsburg rulers: Charles III, Maria Theresia and Leopold II. Due to the shortage of space, the list is the result of political compromises: rulers from the Habsburg House could not be omitted; at the same time, it is no mere coincidence that, while every statue faces the centre of the hall, Chief Árpád faces the Habsburg rulers in his vicinity with assertive pride.

Forty kilograms of gold were used for the decoration of the building. Gold may be stretched and hammered until it becomes an almost transparent sheet, so-called gold dust, 8–10,000 of which amount to the thickness of one millimetre. One wedding ring’s worth of gold is more than sufficient to turn Rákóczi’s equestrian statue outside the Parliament Building gold. The master of gold dust covers the area to be decorated with an adhesive substance and tickles his own face or hair with his secret tool, the squirrel-hair brush, which fills the hairs of the brush with electricity. In consequence, the brush becomes capable of grasping the thin gold sheet. Any other tool would immediately destroy the gold dust.

The lounges of the house of representatives and the upper house open from the Cupola Hall in two directions; it is via these that we may proceed to the session rooms. It is of symbolic significance that the carpet in the lounge reserved for the house of representatives is red, while the colour of the carpet in the upper house lounge is blue. These are Europe’s largest carpets. The carpets covering the two lounges are more than 21 metres in length and more than 7 metres in width. The carpets are perfect replicas of the original ones; regrettably, those were destroyed during the war. They are hand-knotted Hungarian Persian woollen carpets, made in Békésszentandrás. It takes 100,000 knots per square metre to create them.

Upon leaving the Cupola Hall, as we proceed down the ceremonial staircase, the door opposite leads to the so-called delegation room; during the Austro-Hungarian Empire, in addition to the two session rooms, this was the third most important meeting area. This is where the Speaker of the House receives foreign delegations today. As part of this year’s 20 August celebrations, this room will host the award ceremony of the Prize for Hungarians Beyond the Borders. This prize is awarded to fellow-Hungarians living beyond the borders who do a great deal for the preservation of their Hungarian identity and their communities.

In the middle rest area of the ceremonial staircase, to the right, we may see the bust of Imre Steindl, Professor of the Technical University, a work by Alajos Stróbl.

Further interesting features of the building are that there are 27 entrance gates, the total length of the stairs is 20 km and the length of the red carpets that cover the corridors and stairs reaches 3.5 km.
The plan of the architect of the building, Imre Steindl was bold and grandiose, widely different from the rest of the plans submitted as it was conceived in the neo-Gothic style, similar to the Houses of Parliament in London a few years earlier. The construction of the Parliament Building began after the selection of the awarded plan, in 1885. The construction works were mostly performed by as many as 1,000 people daily, and when necessary, they also worked at night aided by the light of large search lights in order to complete the entire building by the millennium celebrations planned to commemorate the anniversary of the Hungarian conquest, by 1896. It soon transpired, however, that this was not feasible. Work was therefore re-organised in such a way as to complete at least the Cupola Hall for the ceremonial session of Parliament which was to house the ceremonial combined sessions of the two houses of Parliament. This feat was successfully achieved. For the duration of the celebratory events, the Holy Crown and the rest of the coronation regalia were brought over from the Buda Royal Castle. The building was finally put into use in 1902, 17 years after the commencement of the construction works. During the construction of the Parliament Building, it was an express desire to only commission Hungarian artists and, as far as possible, to use local materials and the products of local manufacturers. The project therefore gave a boost to entire industries. Another fundamental principle was that, in the case of this building, there was no room for austerity at the expense of quality. Consequently, the building was eventually completed from twice the budget of the original plans, 38 million Austro-Hungarian crowns.

More information may be obtained on the special programmes of the Parliament Building on the website at http://parlament.hu/ and at the telephone number +36 1 441-4801.