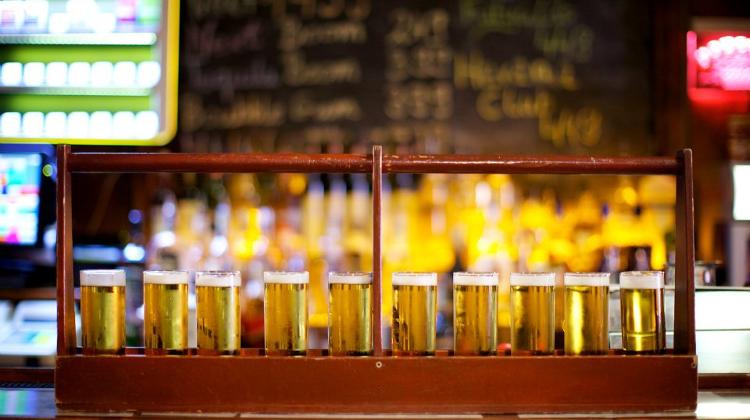 By<a href=" http://welovebudapest.com/en " target="blank"> We Love Budapest </a>: Cheap and cheerful pubs constitute an essential part of Budapest’s nightlife, offering many liquid opportunities to warm up an evening. Since some of these spots are rather hard to find, and the ones you might bump into may not be worth either your time or money, we’ve reviewed the best of the bunch in downtown Budapest for you here.

Caesar Söröző (Caesar Pub) is THE cheap pub of Király utca, one of the busiest streets of Budapest’s party district. Only for the sake of a comparison, the prices of neighbouring Kuplung are twice higher. Arany Ászok, Caesar’s most popular beer, costs 250 HUF, and discounts are aplenty – usually on vodka-based long drinks - , so you can wholly get rid of your inhibitions for about 2000 HUF. When a major soccer game is on, Caesar gets unbearably crowded, and there’s always a massive queue at the restroom, so be prepared, and be patient!

Akácfa Sörözö (Akácfa Pub) is located on the corner of Akácfa utca, a street famous for BKV’s (the public transport company of Budapest) headquarters specializing on collecting fines from rule-neglecting passangers. That might not sound so good, but don’t you worry none, Akácfa Söröző will cheer you up within a blink of an eye. This popular pub that could serve as a scene in the Hungarian version of American Pie is in the vicinity of both the ruin pub-heavy 7th district and the Great Synagogue. It is mostly frequented by students, although tough-looking locals are also present every once in a while. It has a spacious, vividly-colored cellar, so don't give up on hope even if the first floor is out of free seats.

Cheho is one of the most popular pubs in the city centre, situated on the corner of Nagymező utca (a.k.a. The Broadway of Pest) and Zichy utca. Although the prices are quite low, the spot is surprisingly classy. There are plenty of special offers, such as the enormous glass sphere containing 2 litres of beer, Don’t miss out on the different types of Berentzen pálinkas – we highly recommend the green apple flavoured. Be careful though, these spirits are addictively delicious!

B-City is a must-try pub situated in the 6th district, a sloth’s marathon (about 500 metres) away from the Godzilla of ruin pubs, Instant. Due to its neon-green lights illuminating Zichy utca, finding B-City is as easy as pie-making for a grandma. The place has three spacious rooms: the first two are loaded with tables and chairs, while the third one provides an opportunity to test your soberness while playing pub games. The owner’s dog is always loitering around the customers, and he’s so friendly that he might even buy you a beer.

Bakegér Borozó (Bakegér Wine House) is an old-fashioned taproom in the heart of the 6th district, near Oktogon. Its main advantage is that you can nibble pogácsa (a type of savory scone) for about a 100 HUF, which can be rather useful if you’re looking to lessen the effects of alcohol. Some of the regulars have been leaning against the same counter for over a decade, though you can also meet a plethora of students every night.

Broadway Söröző (Broadway Pub) is situated at the end of Nagymező utca (as you already know, a.k.a. the Broadway of Pest), near Bajcsy-Zsilinszky út (Bajcsy-Zsilinszky Road). A colorful sign hanging above the entrance showcases the latest drink discounts, and attracts customers like eucalyptus leaves attract koalas. Broadway’s loft gets crowded pretty quickly, so if you’re just planning to drop in, you might not find an empty seat. We recommend this place as the last stop of an all-nighter, because it is open until dawn, and only the most faithful regulars stay that long.

Ózon Café, located in Ó utca, a street parallel with Andrássy út (Andrássy Avenue), is a friendly nook with an interior pillared by bright colors. Believe it or not, the bouncers speak multiple languages, and happen to be surprisingly helpful. To get a rest between two glasses of beer, you can get indulged in foosball matches, or you can just sit around and chat with your pals.

Andersen Pub is a mixture of styles stranger than fiction. It was supposed to be the first Danish pub in Budapest but ended up having nothing Danish about it; though there might be a hidden Lego storage underneath the floor. The interior resembles a pub from a Clint Eastwood western flick, the music is even louder than the rumble of chatter, and the crowd consists of teenagers and twentysomethings. Andersen’s most popular offer, called ‘A metre of beer’ - ten glasses of beer served in a wooden box –, is sold for 1000 HUF, so you won’t have any difficulties getting wasted.

Monyó, situated a tram stop away from Központi Vásárcsarnok (Great Market Hall) and Szabadság híd (Liberty Bridge), is arguably the darkest café in Budapest, so don’t be surprised if you bump into Batman. The most curious – and, after a couple of shots, the most dangerous - design elements are the swings substituting bar chairs at the counter. The specialty of the spot is called Monyó cocktail, and is said to be quite delicious. Taste it for yourself!

Tett-Hely (a nearly untranslatable pun, which, without the dash, means crime scene) is a cellar pub situated in Kertész utca. Robi, the owner and bartender, looks like a prison veteran, but, as they say, looks are deceiving, and he’s actually one of the nicest people you can come across. If you wish so, he puts on your favourite record, and makes your head dizzy with one of his cocktails.

Denoting Lámpás (meaning lantern) as a dime-a-dozen pub would be more than offensive. Situated in Dob utca, in the vicinity of ruin pub-filled Kazinczy utca, and housed by a labyrinth-like cellar, it is a surreal spot that will pull you in with its bohemian vibe and shadowy nooks, and won't let you go until closing time. It's out of business during the summer months, but the lanterns of Lámpás light up your night from around September like no other place could.