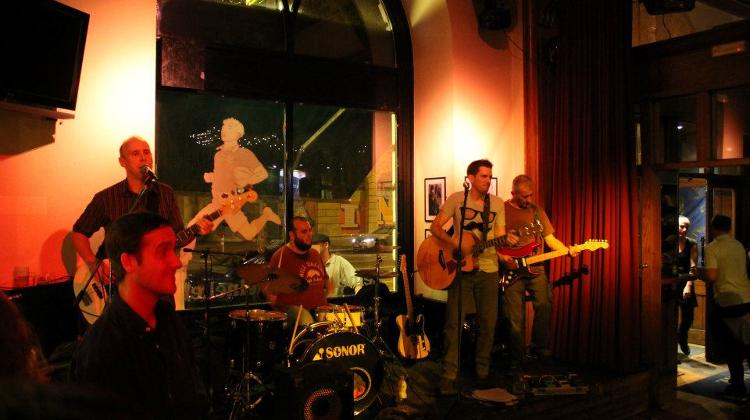 Saturday, November 10th saw the long-awaited debut of Budapest's newest cover band super-group, The Vibe. Shameless, consisting of two of the members of The Vibe, Michael Kentish and Jon Spinks, opened the show with a grooving mix of old classics and more contemporary tunes. The song selection was well targeted to get people to start singing along almost immediately with "Smile Like You Mean It" (The Killers) and "That’s Entertainment!" (The Jam). I was surprised that not everyone started slow dancing to "Ain’t No Sunshine" (Bill Withers), "Handbags & Gladrags" (Mike d'Abo) and "All I Have to Do Is Dream" (The Everly Brothers). They finished up with some faster-paced tunes such as "Stuck in the Middle with You" (Stealers Wheel) that got the front-row of shaking their booties.

The Vibe put on a great first show. I particularly enjoyed "Valerie" (The Zutons), "1979" (Smashing Pumpkins), "De Do Do Do, De Da Da Da" (The Police), "Don't Let Me Down" (The Beatles), "I Can’t Explain" (The Who), and the encore "Teenage Kicks" (The Undertones). Jon Spinks' singing was particularly solid. Drummer David Asztalos had a private fan club of young girls dancing, singing and screaming his name in the front row. I expected bras to be thrown on stage at some point. The Vibe will play again at Beckett's in January.