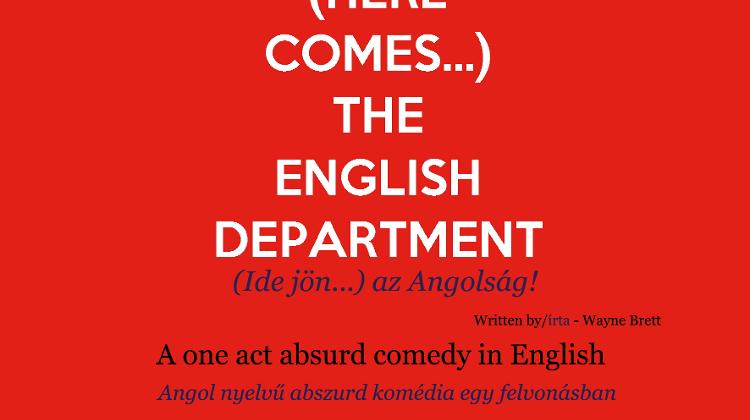 Danube Events is proud to present our latest production, making its world première in Budapest. (Here comes...) the English Department by Wayne Brett

Tickets: 1450 ft per person in advance ¦ 1950 ft on the door
Available online from: www.tickets.DanubeEvents.com or in person from:
The Caledonia (Mozsar u 9) or Yellow Zebra Bookstore (Lazar u 16)

A new absurd comedy stage-play, in English, with just a little Hungarian, a couple of utterances in French and one German word… Set in Budapest in 2005, a year after Hungary joined the EU, we follow a group of three Brits who’ve all moved to the country for their own individual reasons. The locals are welcoming, curious about the oddities and motives of the outsiders while proudly offering up their own angle on how it all is. Deception, confusion and at some times euphoria ensue. Does anyone really know where they are going in this life? Look out for some tips from the top.

The play has been written by Wayne Brett, an actor and musician well-known for appearances on Hungarian TV and various feature films. The multi-national cast includes Mark Bubno, known for his numerous theatrical appearances in English and Hungarian and as one of Hungary’s top musicians and singers in bands, such as Anna and the Barbies. Morocco’s Nourrdine Hajhouj, best known for his appearances as a stand-up comedian around the world makes his theatrical debut, whilst Germany’s impressive acting talent Lena Kalisch also stars on the opening night, with her role taken over by popular Swedish actress Madeleine Damasdi for the March performances. Ireland’s Owen Good faces the challenging task of playing a Scotsman, whilst Hungarian actors András Urszán, Edina Nagy, Ágota Uzsoki and Bence Schwarcz make their English-language stage debuts.

In all, five countries are represented in the cast, plus a sixth in the form of experienced American director Patrick Mullowney, whose credits in Hungary include the Örkény István Színház, Nemzeti Színház, and Pintér Béla Társulat.

“(Here comes…) the English Department” is the latest production from Danube Events, Central Europe's leading promoter of English language entertainment, bringing comedy, theatre, live music, quiz nights, speed-dating, karaoke, excursions and much more to audiences across the region. Now in its fourth year of operation, Danube Events launched in Budapest in 2009 and has since expanded successfully in to 7 more locations.