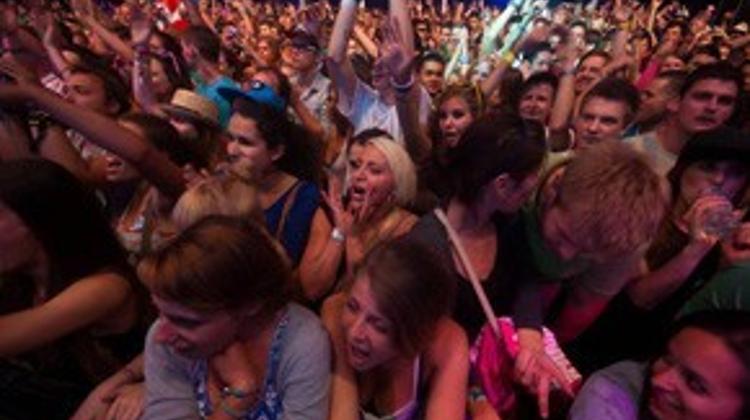 The colorful and diverse line-up of Sziget Festival 2013 is building up well, with 24 new acts freshly announced for various stages: many are new-comers to Sziget, but there will be many acts that have proven popular in previous editions of the event too. The non-stop week of party fun will be held this year between 5-12 August.

Talking about the new announcement Károly Gerendai, director of Sziget Festival, told XpatLoop: „When we organize Sziget we follow the concept of having new performers of course, but also bands that provided some of the most memorable parties previously”, as is reflected in the new names decribed to us by our friends at Sziget in order of where the act will perform:

Among the newly announced names we can find performers at the afternoon and early night slots of the Main Stage. Ska-P had their most memorable gig at Sziget in 2005 when the Spanish band rocked the stage in Bush-masks and on stilts; however they have called off their 10-year long music revolution for an unknown time. Fortunately, this was their only announcement that was untrue. They will be back this year.

Singer Deborah ’Skin’ Dyer of Skunk Anansie stepped on the shoulders of her fans at her last concert in 2011 at Sziget. This should happen this year as well!

King and main figure of the grime movement, British rapper, Dizzee Rascal is a guest of this year’s festival. He's had  four incredibly successful albums – certified gold and platinum without exception – and a memorable performance at the opening ceremony of the London Olympic Games.

The Editors is a very popular and characteristic icon of the post-punk movement of the 2000s, and hey will prove this on the Main Stage at an early afternoon slot...

British singer, Brit Awards nominee, Alex Clare has many popular and cool songs merging the most popular music trends of today. He uses electronic genres, like dubstep and new wave drum’n’bass, mixing it with suggestive guitar sounds and a hint of soul.

Enter Shikari plays hardcore music, mixing electronic, metal and rock. They have conquered the world with their album last year and now they are ready for Sziget!

One of the most beloved venues of Sziget is following the trend of the previous years: the huge tent will be the home of diverse and exciting productions, proved by the upcoming names as well.

For a start, here is the exceptional talent from North-London, Michael Kiwanuka, a refined and sentimental singer-songwriter who plays his guitar with a sense of folk and jazz. His first album hit the charts in many countries and has become gold.

True inspiration for punk-rock bands, Bad Religion, reached the peak of their career with their 16th album ’True North’ in 2012: it was listed in the top 20 of the American Billboard 200. Now the crowd of Sziget can congratulate them!

Melodramatic, downtempo and chilled pop songs are the identifiers of the music of Woodkid, a French musician, who is arriving to Sziget with his new album, to be released this year.

Peter Bjorn & John are vivid and colorful icons of the indie world. Their “whistling” song is such a success that it is reaching 36 million views on the largest video sharing service. They are nicely merging mainstream popular sounds with some underground melodies.

A real 21st century London-girl, who makes her dreams come true by her talent, Katy B, is the new face of British dubstep. She recently received an NME award and now she brings her special style to Sziget.

Netsky is the exporter of Belgium’s most wanted, premium category drum’n’bass productions. After his singles he introduced himself on the Belgian charts and his second album was in the top 20 in the United Kingdom. The 24-year-old guy from Edegem is coming to Budapest with his live show.

Tame Impala plays psychedelic rock with hypnotic and melodic tunes. The Australian band has not only impressed the younger generation with their album in 2012 but the critics as well. Their second album ‘Lonerism’ has been awarded Best Album of the Year by Rolling Stone Australia, NME and Filter.

It is high time that Orlando Higginbottom, known as Totally Enormous Extinct Dinosaurs, after several gigs at the biggest European and Northern-American festivals, plays at Sziget. His live set will definitely be a visual adventure with a range of weird instruments.

Everything Everything plays nice and easy guitar pop that is sometimes inspired by a melancholic and solid atmosphere.

Wax Tailor is opening his magical world of rare musical treasures to Sziget. Be aware that you might become an addict!

Isabelle Geffroy is a beloved French chanson singer. Her band, Zaz, winner at Victoires de la muisque – the most important music gala in France – in 2011, and performer of probably the most well-known French song ‘Je Veux’ , plays now at Sziget. She also received a European Border Breakers Award, representing that that her talent and popularity is without borders.

Cata.Pirata and Crypto.Jori plus three musicians from Amsterdam have formed SKIP&DIE, a very extravagant and brave production. Their big multicultural project merges everything that means ‘world citizen’. They are using traditional African, Arabic and Indian instruments mixed with contemporary Western hip-hop and modern electronics. They are inviting the fans to dance in Zulu, Spanish, Portuguese, English, Afrikaans and Xhosa languages.

New names have also arrived for the line-up of the mega-tent, the Arena as well. This is the venue where the early afternoon hours are taken by the so called “European Slots”, presenting live bands from the old continent, but later on it hosts huge parties with great performers.

Empire of the Sun came to Sziget two years ago, making a party at a completely full venue. They play romantic electro-pop and probably even the world-known Cirque du Soleil group could not beat them when it comes to stage production.

For years now it’s hard to find a more exciting, louder and successful drum’n’bass act in the United Kingdom than Chase & Status Live. The well-known electro-musician and producer duo of Will Kennard and Saul Milton are coming this year to party up the Sziget crowd.

A revolutionary and innovative techno musician, Chris Liebing, has remixed many popular songs and also wrote his own ones that we will hear now in the Arena. His style has been mastered with the development of electronic music, but he has never stopped playing his massive techno basics.

DJ and producer, Sebastian Ingrosso, is one of the main figures of today’s Scandinavian electronic music scene together with Axwell and Steve Angello, forming the popular house-group, the Swedish House Mafia. His dynamic and energetic house music is played in the biggest international parties and e-music events, bringing out the most of his ten thousand fans.

Two bands will definitely play in the European Slots of the Arena. First of all, Afterhours, one of the most well-known Italian rock bands. They play passionate tunes and rock ballades, based on nice guitar.

Also playing in a European Slot is Left Boy, a very talented Austrian singer-producer in his twenties. His sexy lyrics are played on a massive electro and dubstep base. Last year he had several sold-out gigs in Europe and he just came out with his new EP.