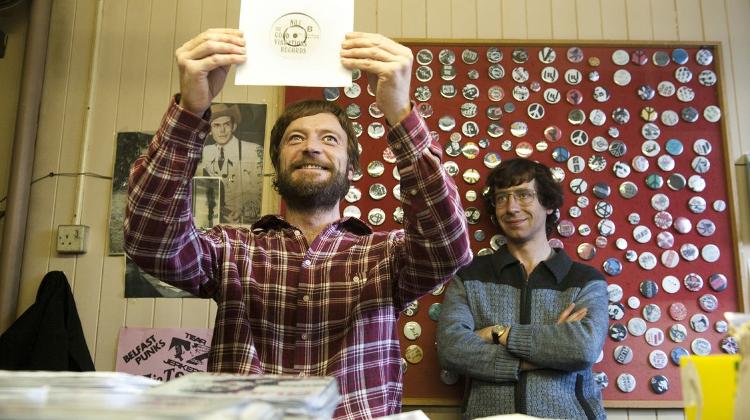 A true flagship of this year’s Titanic will be the selection of contemporary Irish films, titled Emerald Island, corresponding with the Irish EU presidency in 2013. The section contains six feature films and a selection of 10 outstanding short films and animations as well. Between 5-13th April the audience can watch Róisín Murphy from the band, Moloko, a horror-comedy staring a sea-monster, a horror from the world of blocks-of-flats, a social drama, a film on the life of the legendary Belfast punk-rock rebel, Terri Holey and a documentary.

Lenny Abrahamson’s What Richard Did will run in competition. It tells the fateful story of a gifted and gilded Dublin teenager whose bright future is compromised after a senseless act of violence. The film stars Róisín Murphy from thr band, Moloko.

There will be four further films running in Emerald Island. In the hillarious horror-comedy, Grabbers – a film by Jon Wright - one day a bizarre sea creature appears on the shore of a small Irish island. It has long tentacles, sharp teeth, and intentions that could not be called friendly. But they have picked the wrong spot to work their evil plans. It may take a lot to rile these Irish islanders but no one is going to mess with their pub!

Festival-favourite Citadel, directed by Ciarán Foy is a a horror too, but with a much darker shade: Tommy Cowley is a man inflicted with chronic agoraphobia since the day his wife was attacked and he was unable to protect her. Living in a council estate from hell, he finds himself terrorized by a gang of twisted feral children, who are intent on taking his baby daughter.

Good Vibrations ( photo) by Lisa Barros D'Sa and Glenn Leyburn was the opening film this year at Karlovy Vary Film Festival. It tells the story of the legendary, radical Belfast punk-rock rebel, Terri Holey, When the bloody conflict known as the Troubles shuts down his city and all his friends take sides and take up arms, Terri opens a record shop on the most bombed half-mile in Europe and calls it 'Good Vibrations'. Through it, he discovers a compelling voice of resistance in the city's nascent underground punk scene and becomes the unlikely leader of a motley band of kids and punks who join him in his mission to create a new community, an alternative Ulster, to bring his city back to life.

Keys To The City is the first film of directors Christopher Brennan, Mel Cannon and Laura Way. In this drama three separate stories meet. Eoin is a businessman who can no longer pay the bills or the mortgage, Paul is a landlord with the banks breathing down his neck and Monika is a Polish cleaner whose minimum wage job is under threat. All three are struggling for survival and forced to increasingly desperate actions in the hope of keeping their lives and families together.

A documentary, Knuckle is also included in Emerald Island, It is an epic 12-year journey into the brutal and secretive world of an Irish Traveller community. The section also contains a 109-minute selection of 10 outstanding short films and ainmations.

The 20th jubilee Titanic International FIlm Festival will run between 5-13th April. It gives an overall selection of the best contemporary films. This year 60 films will be presented of famous and first-film directors as well and it also shows fascinating pieces of less-known regions too. Titanic operates as a Competition Festival since 2005.