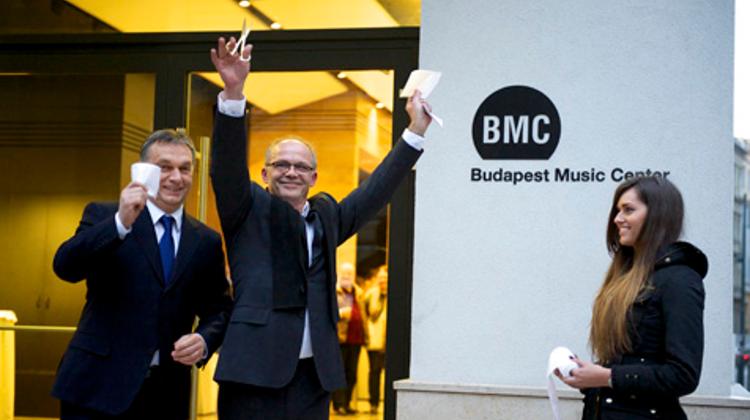 Viktor Orbán declared "Music has brought us together this evening", adding that Hungary is lucky to be talented in the field of music, and not a day passes without the work of a Hungarian composer being performed in the world's most prestigious concert halls.

The Prime Minister emphasized that this is a great opportunity for the self-expression of the Hungarian genius, adding that Hungarians may reach out to the whole world through music.

Viktor Orbán declared that music is especially important for Hungarians, and this is also underpinned by the fact that regardless of the economic crisis funding is being provided for the Academy of Music, the Hungarian State Opera House, the Erkel Theatre and now the Budapest Music Center. He said that the Budapest Music Center was established through the ingenuity of Hungarian musicians, the courage of founder and director László Gőz as well as through public will and public support. The Government contributed to the HUF 2.5 billion investment with HUF 500 million in funding.

Zoltán Balog, Minister of Human Resources welcomed the fact that private capital was also included in the establishment of the Music Center. He pointed out that the Budapest Music Center is situated in the best location for culture and the future, since five universities may be found in its immediate vicinity, and so they may also count on the attendance of young people.

Mayor of Budapest István Tarlós emphasized that Budapest intends to be the supporter of the institution mentioning as an example that the new building may be one of the venues of the Budapest Spring Festival
According to János Bácskai, the Mayor of the 9th district, Ferencváros has become a cultural magnet, since among others the Museum of industrial Art, the National Theatre and the Palace of Arts are all situated here.

András Batta, the Head of the Liszt Ferenc Academy of Music said that he is hopeful that one day Budapest would be the Silicon Valley of music.