VOLT: It Is Good Everywhere, But The Best In Sopron, Hungary 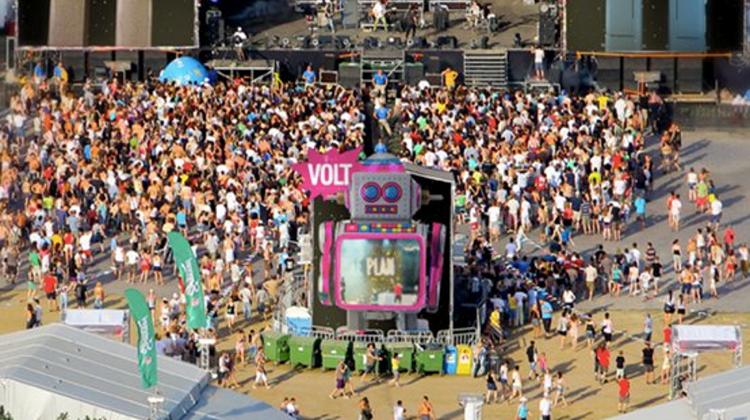 It is now confirmed that VOLT Festival will take place at the well-known Lővér Camping at Sopron, Hungary. At todays press conference many more have been revealed, especially about the visuals of the event, new venues and programs and also a special focus on environmental protection. Telekom will stay the main sponsor of the event with a line-up of 30 all-stars. VOLT Festival takes place between 3-6 July, 2013.<br>The picture is an illustration of the plans.

VOLT stays in the Lővér Camping in Sopron

Zoltán Fülöp and Norbert Lobenwein have started the press conference with the statement:”It is good everywhere, but the best at Sopron- This is what we reply when someone asks whether the festival moves from Sopron”. The main organizers have also added that there were doubts whether the festival could stay at the Lővérs of Sopron, what is said to be one of the most ideal and beautiful festival location in Hungary, or have to look for a new place. They announced:”The leaders of Sopron similarily to us see VOLT as a symbol of the city, that’s why we were looking for the best solution together. We have also discussed the issue with Zoltán Illés, state secretary of environmental protection. Finally we have agreed that VOLT Festival will be hosted at the Lővér Camping and surroundings in Sopron for 4 more years, so in 2013 as well, with a special focus on the environmental values.”

Besides the rich programs of this year’s VOLT, there will be a special focus on environmental protection. As the result of the cooperation with the Fertő-Hanság National Park, the festival-comers can have more insights of the natural treasures of the region. Environmental protection is important for the sponsors of VOLT as well, that’s why the Heineken Hungária Breweries, the distributor of Soproni beer, the most popular drink of VOLT Festival, made it possible to serve the chilled beer in the recyclable re-cup.

The robots are the main characters of this year’s campaign of VOLT Festival, who are not only smiling from the posters, but will be on the spot at the festival as well.

Telekom – as the main sponsor of the festival- and the organizers of VOLT will dress up the Telekom Main Stage and surroundings with robots. The plans are to make this program venue have a grand and spectacular look. In addition, every night at the Telekom Main Stage after the big concert at night, a huge party will take place with special effects by Telekom.

Fine arts were always part of the VOLT Festival. Earlier Trabants or personal objects were transformed by artists and last year contemporary artists Éva Magyarosi, ef. István Zámbó, András Wahorn and József Szurcsik have composed flowers at the festival. This year ten contemporary art groups at ten program venues will make robots alive in four days. Some sculptures of robots, paintings, gigantic installations will be born! The names of the artists will be released later.

Of course the audience will have the chance also to play with the robots. The organizers will have 1000 paperboards and decoration materials available on the spot, out of which you can make robots. The winners of the robot beauty contest will get valuable gifts.

A renewed school has a social impact on the life of the youth, while a new road shortens the distance between humans. Such a prestigious festival as VOLT gives an experience for the participants, something personal, just as the developments by the New Széchenyi Plan, even if it is a life-time concert experience or a football game on the new pit of the high school.

The symbol of the developments will be the New Széchenyi Plan Adventure Park at VOLT Festival, that will not only be spectacular for those looking for adventures, but for the viewers as well. The youth can climb a 25 meter high tower at the field in front of the Main Stage with the help of alpinists and professionals, afterwards they can slide on an almost 100 meter above the crowd by the Main Stage.

Best of Sopron, Best of Hungary

One of the aims of VOLT Festival is to show the best of everything, from music to fine arts through gastronomy. The organizers said:”For many years now the Wine Festival of Heti Válasz is one of the most beloved venue, where mainly the best wineries of Sopron region introduce themselves. This year we will develop the gastronomy section of the festival. We want the best strudel of Hungary, the best patisserie, macaron to be available as well as the most known cocktail bar of Hungary. Besides the tastes, of course we want to show the best music as well, so we invited the most popular programs and club series to the different clubs of VOLT.

All-stars from A to Z at VOLT

No doubt, this year’s line-up is probably the best. The all-star acts will satisfies everyone’s needs: at the three main stages of the festival the biggest names of all genres will play!

Billy Talent: Canadian punk rock band on stage for 20 years now being continuously successful for playing massive rock with a hint of punk pop. This year they are not only touring the world with their big hits but playing new songs from their album ‘Dead Silence’ released last autumn.

Bonobo: Simon Green DJ-producer from Brighton is one of the most sophisticated representative of electronic music and he will play his live set in Sopron. His new album ‘The North Borders’ will be the main focus of his concert.

Borgore: one of the most popular dubstep icons today. The DJ and producer from Israel is 25-year-old, but a real party animal making massive music, what he just calls ‘gorestep’. It’s a definitely must-see!

Bullet for my Valentine: Since the appearance of the band we know that heavy metal exists in Wales and this genre is still among the most popular ones. They know everything about heavy metal that they adopt perfectly in their music by mixing styles of their ancestors and adding aggressive and fast beats with melodic chorus.

DJ Fresh: Drum’n’bass is back and its most popular name is DJ Fresh, who came out with his album Nextlevelism two years ago. The British DJ is not new in clubs. He knows everything about this genre, so we will see what he brings to VOLT: a huge drum’n’bass party or a more danceable night with his well-known tracks.

Dub FX: He is not coming to prove anything. He has been rather popular on the video sharing portals and the blog-sphere, while he has also toured all five continents with his loops, revolutionizing the world of street performances

Example: Many say 2013 will be the year for Example as all of his gigs are sold-out and “The Evolution of Man” debuted at number 2 on the UK Singles Chart. The well-known star sees electro music with the eyes of hip-hop, getting fans from electro house and dubstep as well.

Gus Gus: Music that comes from Iceland in 2013 is cool. Representing this new trend, will play their sophisticated pop hits this year at VOLT. Their melancholic and frozen-romantic style will probably be very refreshing in the July heat, creating a unique atmosphere at the festival.

Hurts: The romantic and melancholic British synthpop duo has been popular from the very start. Their new album, Exile, will be out 11th March, so in Sopron the duo can test the fanbase live with their new songs.

Jamie Woon: Being sexy and smooth with an exceptional voice singer-songwriter Jamie Woon blends sensible electronic tunes with hot soul music. His career is on the right path since his album Mirrorwriting was released in April last year. Since, he was awarded to be the year’s most promising new British artist.

Klangkarussell: With its exciting atmosphere, Klangkarussell from Austria will surely entertain the crowd of VOLT. The two ambitious and talented Austrian, Tobias Rieser and Adrian Held, play mainly lounge-jazz music on a solid electronic base.

Knife Party: they are a successful electro house duo with members of the former Pendulum combo. They have two EPs so far, but this spring they will release their third one. They have done a lot of remixes and tracks together with Skrillex, Kill the Noise and Steve Aoki.

Martin Solveig: French DJ Martin Solveig is an outstanding representative of his nation all around the world by making easy-going, sensual and witty dance music. And he’s ready to say Hello to the crowd at Sopron this July.

Papa Roach: true icons of nu metal and this time they will show the crowd in Sopron why they belong to roc
k history. Their gig is probably one of the most awaited events at this year’s VOLT, where the biggest hits of a generation will be heard.

Parkway Drive: The Australian band is familiar not only among HC fans but also teen skaters for being heavy and aggressive. It has to be seen and heard with the possible chance of the volume blowing your mind.

Parov Stelar Band: Austria’s finest Parov Stelar Band - founders of the electro swing genre and one of the most beloved party bands at big festivals – will return to Hungary.

Queens of the Stone Age: The band from Palm Desert, California has basically invented their own style, playing a riff-based, mind-blowing solid rock, led by their ingenious front man, Joshua Homme. Queens of the Stone Age has already recorded 5 great albums, currently working on the next one with Dave Grohl of Foo Fighters and Trent Reznor of Nine Inch Nails.

Skream: Dubstep legend and producer, Skream, is an original performer of the electronic music scene. He is also a member of Magnetic Man, but looking for new challenges, he made his own music with a bit of techno and house and now he will make the audience dance at this year’s VOLT Festival with his fantastic set!

Sven Väth: Godfather of techno, Sven Väth, not only makes the audience crazy at underground venues and trendy clubs but this year promises a huge party for VOLT Festival as well.

Thirty Seconds To Mars: without doubts one of the most important rock bands of the last few years, already giving a sold-out show at the 2011 edition of VOLT, in front of a massive crowd of 25 000. The band has millions of fans all over the world and even made it to the Guiness Book of World Records, thanks to the 309 concerts they gave to present their “This is War” album until the end of 2011. Currently working on their fourth studio album, Thirty Seconds to Mars has been a top choice of fans at the festival’s wishmachine app, so thousands of them will be delighted to see the band returning and headlining the opening day.

Turboweekend: Danish hipster parties’ favorite, an indie pop band with a hint of electro and now they are also confirmed for VOLT.

Of course there are a lot more great Hungarian bands in the line-up, ready to be discovered by all foreign guests as well, so make sure you are open for local quality!