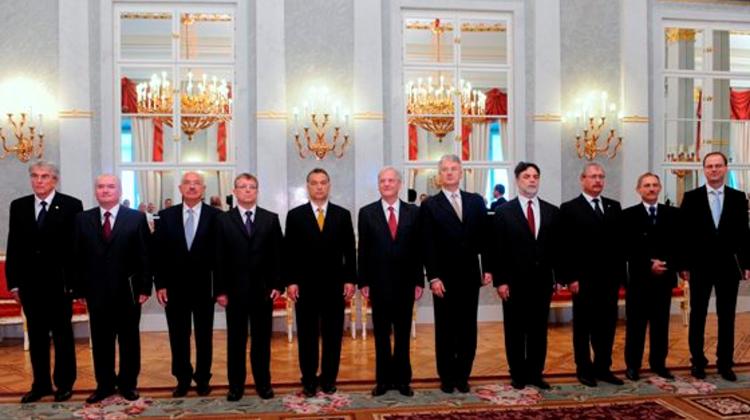 Commentators don’t refrain from political remarks while tens of thousands of volunteers, leading politicians among them, help professionals build temporary defences against the highest water levels the Danube has seen.

In Népszava, István Szász pays tribute to the Prime Minister’s performance, in an unusual gesture for a left-wing daily in constant war with the right-wing government. “Viktor Orbán gets very little praise from these columns normally”, he remarks, “but now it is not the right time to wage political struggles”.

No decent Hungarian citizen, Szász argues, should deny the government and the authorities his or her support in their struggle against this natural calamity. He admits that the authorities have neglected building and bolstering ramparts and flood reservoirs for decades, but cautions against witch-hunting. Now “it is time for unity, now we have to show that we are responsible citizens of a country in trouble”.

In Magyar Nemzet (print edition), Csaba Lukács appreciates Népszava’s gesture as well as the unity the population has shown in facing the floods, regardless of political affiliations. ”I don’t even mind”, he continues, “if politicians have themselves photographed while taking shovels into their hands”.

He also mentions however, that eleven years ago, during another high surge of Hungary’s rivers, the (left-wing) Prime Minister of the time was following the developments from the French Riviera, taking a rest after the lavish pay rises he had promised in order to win the elections (which plunged Hungary into a debt spiral).

At the time, there were ambitious plans to build reservoirs and bolster dykes, but precious little has been actually done, due to the recurrent financial problems the successive governments have been facing. Finally, an EU financed project along the Danube was kick-started early this year, and that is why powerful machinery luckily happened to be on the spot when the surge was approaching.

Lukács finds it understandable that politicians think in terms of four year circles and therefore find it difficult to embark on long term projects, but hopes this year’s flood will teach them “to follow something else than popularity indexes once in a while”.

In a front page editorial,  suggests that the government has used the opportunity to announce two unpleasant decisions, hoping that they wouNépszabadságld pass practically unnoticed amidst the news about the flood. “It was a professional move, but not an elegant one”.

One decision was to amend the Fundamental Law yielding to strong criticism from the European Union on two points, while the other was to admit that the new system of automatic electronic reporting from retail shops to the National Tax Authority will not be put in operation by July the 1st as scheduled. It had been promised by former Economy Minister György Matolcsy, and the “failure had to be admitted by his successor, Mihály Varga, who, Népszabadság remarks, was “innocent”.

Foreign Minister János Martonyi, another “innocent Cabinet Minister”, had to announce that the rule allowing for trials to be transferred from one court to another will be removed from the Constitution, just as the provision prescribing new taxes in case the courts, including European ones impose financial sanctions on the government. Those who are responsible for the failures, Népszabadság concludes, “are now busy showing their courage elsewhere” (meaning probably that the Prime Minister is directing the anti-flood operations on the spot, while Mr Matolcsy is President of the National Bank).

In Demokrata (print edition), editor András Bencsik starts his weekly editorial with words of appreciation for the collective effort by masses of Hungarians along the Danube banks, but cannot control his indignation at EU Justice Commissioner Viviane Reding’s criticism of Hungary’s constitutional amendments.

Ms Reding found it unfit for a European parliament to enshrine into the constitution provisions previously scrapped by the Constitutional Court. Bencsik thinks that is a valid principle in normal times. He likens it to river management in normal times. No special measures are required along a river for most of the time. But whenever it surges to dangerous levels, extraordinary efforts are inevitable.

Likewise, he continues, when the constitutional court scrapped the law declaring that by family one means the marriage of a man and a women, plus possibly their children, parliament had no other option than quick action to protect the only sensible understanding of the notion of family “against a fashionable but morbid interpretation”.

In 168óra, Endre Aczél suggests that the government will indulge in pre-electoral spending, once it will get rid of close fiscal monitoring by the European Union (See BudaPost, June 3). He is convinced that the special taxes imposed on energy providers, banks and telecom companies will hinder GDP growth, but – unless the floods will take all surpluses away –agriculture will perform better than last year and new German car making projects will produce some industrial growth as well.

On the other hand, since the restrictions did not directly hit the consumers, the Hungarian government did not have to face the same discontent that was voiced elsewhere, “from Paris to Lisbon and Athens”. And although the government says that its elbow room is extremely limited, Aczél bets it will find the means for sizeable “electoral spending” over the 11 months remaining before the next elections.

Assessing the government’s three years in office in Heti Válasz, political analyst Gábor G Fodor deems it “almost unrivalled in Europe” for a government managing to keep the support of a large portion of the population despite a ravaging crisis. He ascribes that feat to the government’s determination not to make the households pay for the inevitable fiscal redress, even at the price of clashing with the European Commission.

Those policies made it also impossible for the opposition to come forward with a popular and credible alternative programme. The result is an unprecedented opportunity for the right wing to win a second election in a row, Fodor suggests.

In his usual weekly note in Magyar Narancs, the editor (Endre B. Bojtár) offers a solution to the left wing leaders competing for the role of candidate Prime Minister. He deplores attacks by Socialist politicians on Together 2014 leader Gordon Bajnai, and dismisses their idea that the nomination must be the privilege of the largest left-wing opposition party. In fact, many supporters of Together 2014 would not vote for Socialist Party chairman Attila Mesterházy.

On the other hand, many Socialist voters would refuse to vote for Bajnai. Nor does the editor think there is any third potential candidate in sight.

The solution is simple, he suggests: the two parties have to run separately, while dividing the individual constituencies among themselves and other allies, thus avoiding left-wing competition, which would be suicidal under the new, ‘first past the post’ system.

Almost half of the mandates, however, will be distributed among party lists, and Magyar Narancs suggests MSZP and Together 2014 to run on separate tickets. And in case the Left wins, the editor concludes, the party that will get more votes for its list will delegate the future Prime Minister. Thus, he explains, voters will not be forced to vote for someone they don’t fancy, and the Left will therefore be able to maximise its votes.