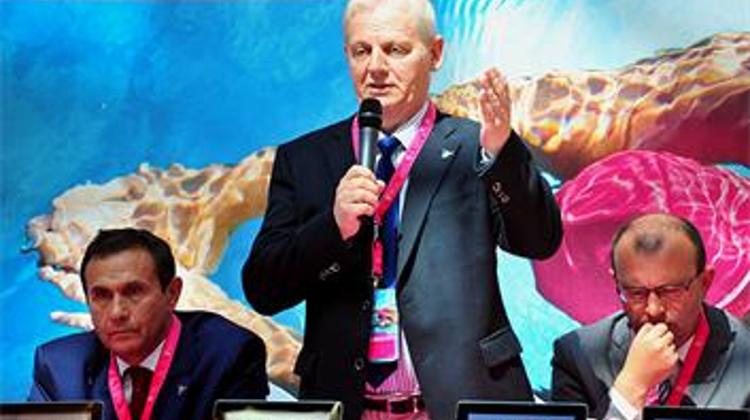 Hungary’s sensational presentation did the job! The FINA (the International Swimming Federation) Bureau, which began meeting in Barcelona on July 19, chose Hungary to host the World Aquatics Championships scheduled for 2021.

The Hungarian delegation to the meeting, headed by Prime Minister Viktor Orbán, captivated the FINA Bureau members and of course, Hungary’s position wasn’t hurt by the successive withdrawals of its rivals. This means that Hungarian Swimming Federation chief Tamás Gyárfás, who said he would quit if Hungary failed in its bid, gets to keep his post.

The 2021 World Championships will be held at four different venues: Lake Balaton, and three Budapest locations - the Komjádi Swimming Pool, the Alfréd Hajós–Tamás Széchy Complex on Margaret Island, and the Dagály Complex’s competition pool, which has yet to be built.

Aquatics World’s coming to Hungary
It’s not much fun to win the 100m freestyle if you’re completely unopposed but we’re certainly not upset that our competitors in the contest to host the World Aquatics Championships pulled out of the race, said Dénes Kemény, President of the Hungarian Water Polo Association, in his take on the previous day’s events. The President of the Hungarian Swimming Association, Tamás Gyárfás, who is also a member of the FINA Bureau, hinted days ago that Azerbaijan and the United Arab Emirates might well play retreat, which they did in the least dignified way possible, not even showing up for the presentation.

So, first Gwangju, South Korea, introduced itself followed by Budapest. The latter was an unqualified success. Not surprisingly, the only question put to our delegation after its presentation was: “Where is Krisztina Egerszegi?” “Sitting at home in front of her television set with her fingers crossed, and if we win, she’ll be also there to greet you in 2021,” responded moderator Dávid Szántó.

Before that question four people had pled Hungary’s case: Olympic champions Zsolt Borkai and Bencze Szabó, president and general secretary of the Hungarian Olympic Committee, were followed by Katinka Hosszú, who took gold in the 2009 world championship medley in Rome, and finally, by Victor Orbán, Hungary’s prime minister.

Hosszú admitted to us that she was more nervous than she usually was before a meet final, then, in fluent English she argued that winning this bid was at least as important to her as next week’s world championship finals because she knew how great it was to race with the support of home team spectators.

Orbán spoke of how Hungary had recently held five continent-wide sports events and then added with a twist his audience acknowledged, that it was now time for the country to hold one event that was five continents wide. Finally, directly addressing the FINA Bureau he said, “At this very moment millions of Hungarians are holding their breath, waiting for your decision.”

Luckily, the wait wasn’t too long. FINA President Julio Maglione let the cat out of the bag in the second sentence of his official address announcing the winners, saying that he had never seen as outstanding a presentation as the ones presented by the current winners. From then on, all everyone needed was sufficient self-control to wait until the envelopes marked 2019 and 2021 and holding the names Gwangju and Budapest were opened. The latter envelope was opened at exactly 12:34 pm, a time worth remembering because of itself it was an eternity. This was the moment it became fact that in 2021 Hungary would host the most prestigious sports event so far.

As the euphoric response got back under control, we suggested to László Kiss, head coach of the Hungarian Swimming Association, that it would be appropriate for him to stay at the water-sport helm of for the next eight years. “Others have already told me that if I stayed on the job through the 2020 Olympics, staying on for one extra year would be child’s play. And I’ll admit that being part of a world championship held at home is a very attractive incentive. But, only time will tell,” said Kiss.

For the next eight years all slipping and sliding will have to be at the pool and not elsewhere in preparations, where deadlines that start slipping and sliding are a no-no. While the designs for upgrading the Komjádi, the Margaret Island Complex and the Dagály – the three pillars of the events – are splendid, from this point on we will need to work on implementation every single day to turn them into reality. I asked the prime minister if he thought that the 2021 World Aquatic Championships would go down in history as the most significant event ever hosted by Hungary given that the only ones which can beat it are the Summer Olympics and the Soccer World Cup. “I have always dreamed of a Hungarian Olympics and I’m still young enough to hold onto that dream,” he answered. “There will be eight swimmers competing in the pools at any one time, but the pools are not built for them only but also for the people sitting in the grandstands. Budapest is one of the major attractions of Europe and the Dagály of itself is a fantastic facility.

It holds far more opportunity than what we have taken advantage of to date. So the 2021 world championship should not be viewed as an expenditure but as an investment whose yield will be way more than what we put into it,” Orbán continued, adding that we have every right to be optimistic since the highest ranking sports event of all time cannot work as a divider, only as a multiplier.

Investment, not expenditure
After winning the right to hold the World Aquatics Championships, Prime Minister Viktor Orbán held an impromptu news conference. “The most important thing in my view is that an organization with 202 or 203 countries as members has told us Hungarians that they think we’re capable of organizing the event. Granted, we also think we’re capable, but now others have given us their vote of confidence.

This is a major achievement for Europe, particularly for Central Europe. The bar has been set way up there, way over our heads in fact, since Hungary has never organized a sports event of that caliber. For our swimmers to be making their heroic efforts in the 50 or 100 meters events eight years from now, we need to get to work and keep at it day after day from here on, to make their successes possible.”