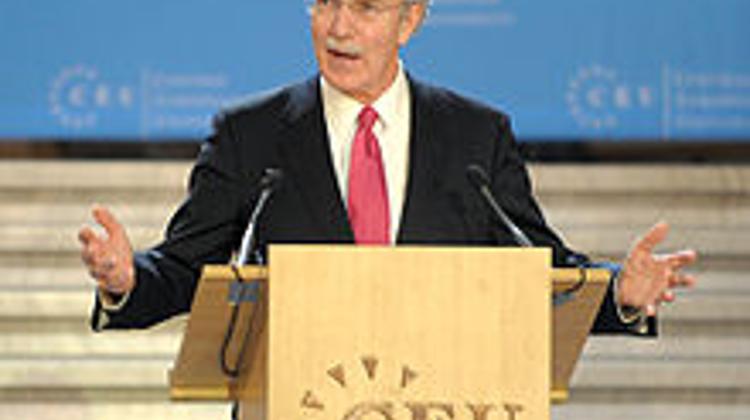 The President and Rector of Central European University (CEU) considers his current post the most important stage of his career. As he told us, CEU has been successful in attracting back to Budapest leading Hungarian academics who had earlier left the country to pursue their careers abroad. Interview published by Figyelő, the Hungarian business and news weekly, with a circulation of 11.200.

You have been recently re-elected for another rectorship cycle. As former U.S. Assistant Secretary of State, in what ways does being the Head of CEU constitute a different challenge for you than sorting out international conflicts?

At CEU, there are lots of foreign students besides the more than three hundred Hungarians, so my job here is similar to being in the heart of the international world as a diplomat. Because of my position, it is important that I maintain good relations with leaders in Budapest and in Hungary as well as with European officials and American higher education authorities, since CEU is also accredited in New York State, which gives us a very special status.

You have been the Head of CEU for four years now. Do you feel at home among the Hungarian rectors?

I am a member of the Hungarian Rectors’ Conference, and a few months ago I welcomed to CEU ELTE Rector Barna Mezey, and we held a public discussion about the future of higher education. I also consult from time to time with the President of the Hungarian Academy of Sciences, Jozsef Palinkas. I feel quite at home among the Hungarian rectors.

Rector Barna often voices his opinion and critique publicly in the media regarding the government’s decisions related to national higher educational institutions. Do you tend to be more diplomatic by nature or do you just prefer to conduct negotiations behind the scenes?

I follow the events and I voice my opinions, but since CEU is a private international university, we do not depend on state funding. In 2011, at the time of the debate about the new law on higher education, CEU, together with Andrassy University, was exempted by the Hungarian Parliament from certain requirements that apply to state-maintained universities.

Universities are run quite differently in the United States. To what extent can the job description of an American rector be compared to that of his or her Hungarian counterparts?

There are quite a few similarities, although as the Head of CEU, I fill two positions at the same time: I am both President and Rector. As President, I am responsible for the direction and management of the university, while as Rector I am in charge of the academic activities, supervising their quality. At Hungarian state institutions, I know that the management and academic affairs are influenced by the state, particularly on matters of budget. As President and Rector, I often appear in civil society and business circles, and I keep in touch with European and American diplomats too.

Why did you accept this job four years ago, isn’t it a step back for you? Or is it just us who do not see the true value of Central European University compared to Tufts or Harvard?

I believe that CEU is a special university in a crossroads of the world. Hungary and CEU lie on the border of Eastern and Western Europe, and the fact that we are working with students and faculty from all over the world can be considered as a unique international experiment. Because of that, I am proud to say that my job is one of the most important and challenging positions that I have held. It may happen, that from 22 of my students 20 come from different countries, and they often learn as much from interacting with each other as they do from course material. One of my best students is a Russian, and the exam task at my law and international relations class was to develop a plan to resolve the Syrian conflict. This student wrote a brilliant paper and developed a negotiating strategy I hadn’t thought of, with perspectives that he derived from his research, his own background and from talking with students from other countries.

As Shattuck is at home with management questions, we ask him to give a short SWOT analysis about Hungarian higher education. (That is, to discuss its strengths and weaknesses, opportunities and neurogical points – the editor.)

The strength of Hungarian higher education lies in its excellent academic record, which earned many Hungarian-born scientists the Nobel Prize in the first half of the 20th century. Its weakness is that Hungary is a relatively small country, and therefore can only maintain a limited number of universities. Another weakness is that there is not enough international mobility in Hungarian higher education. Hungarian universities are starting to recognize that in an increasingly international academic environment, they need to attract international faculty and students, as well as outstanding Hungarians, and to encourage Hungarians to study abroad, too.

There is a lot of potential in the system, but it can be realized only if there is strong and consistent government support. Hungarians are well-trained and smart, although I am a little worried that new graduates are not being prepared enough for the challenges of a complex globalized world. Let me mention a good opportunity: CEU works closely with and the Alfred Renyi Institute of Mathematics of the Hungarian Academy of Sciences, and we have a joint MA and PhD program. This is an example of the type of cooperation that Hungary can develop in the international arena.

In your opinion, what should be reformed in the system in the first place?

I think it would be worthwhile to provide a broader international outlook for the students, and devote more attention to language skills and new technologies. As a starting point, I would look at what is necessary for Hungarian students to be successful in the international arena.

Isn’t it dangerous to prepare youngsters for that? It could mean that they bid farewell to their homeland even sooner.

This danger cannot be countered by giving inadequate education to them for an international career, but instead it can be countered by creating circumstances that would make them want to come back – or simply stay here. In addition to the native pull of Hungarian culture, the greatest appeal could be a well-managed economy, an enterprise-friendly environment, and opportunities to succeed. During my time as President and Rector, CEU has attracted renowned Hungarian researchers from the U.S. and Great Britain by offering them a good opportunity at the university and an exciting international research environment.

Don’t you think that the enterpreneurial spirit is more mature in the U.S.? If someone launches ten companies there from which only two succeed, it is regarded as completely natural, while in Hungary, if your number one plan fails, you often won’t give it a second try.

Of course, much depends on culture and the way one is brought up. Still, I believe that this enterpreneurial skill can be taught and learned, as we are doing at CEU Business School today, especially if the regulatory atmosphere encourages it. In America, unsuccessful enterpreneurs are encouraged to have another go at it and put their ideas to the test on the market. This kind of atmosphere could be created in Hungary, too.

It seems that some public figures are afraid that if the atmosphere becomes too international in certain sectors in Hungary, it would take away something from the couleur locale.

Hungarian culture and language have roots that go very deep. These cultural assets as well as Hungarian history should be made known to foreigners. This is not a threat, but an opportunity.

As a diplomat used to tough negotiations, do you have any suggestions how to establish the national minimum that would help right-wing and left-wing politicians in Hungary find the common denominator at least with respect to nurturing talent and the chances of future generations?

It is the same problem everywhere, including in the United States. In Hungary everybody would like to make the economy stronger and create more jobs, and everybody says they believe in democracy and freedom. I have not met a single Hungarian so far who would refuse these values, even though they may disagree about what they mean. People need to come out of their trenches and talk to each other.

Translated by by Norbert Izsak

- 70 years old. He obtained degrees in history and law at Yale University and at Cambridge University.

- During the Nixon administration, he offered legal help to people who were subject to illegal surveillance. From 1984 to 1993, he was the Vice-President of Harvard. Later on he taught at Tufts University, and became the head of the John F. Kennedy Presidential Library Foundation, a Boston public institution.

- From 1993 to 1998, he served as Assistant Secretary of State under Madeleine Albright in the Clinton administration, responsible for democracy, human rights and labor affairs (basically he acted as a deputy foreign minister).

- Working with Richard Holbrooke, he played a key role in the realization of the Dayton Peace Agreement putting an end to the Bosnian war. He was also instrumental in helping the UN set up an International Criminal Tribunal for the investigation of war crimes committed in Rwanda and in the former Yugoslavia.

- He has received several awards and titles of Doctor Honoris Causa. He is married to Ellen Hume, journalist, they have four children.

- Since his first term as rector, which began in 2009, he has been dividing his time between Hungary and the United States.

- He does not drive a car in Budapest; he usually goes around on his bike or by public transport. In his free time, he sings and sometimes plays the clarinet.