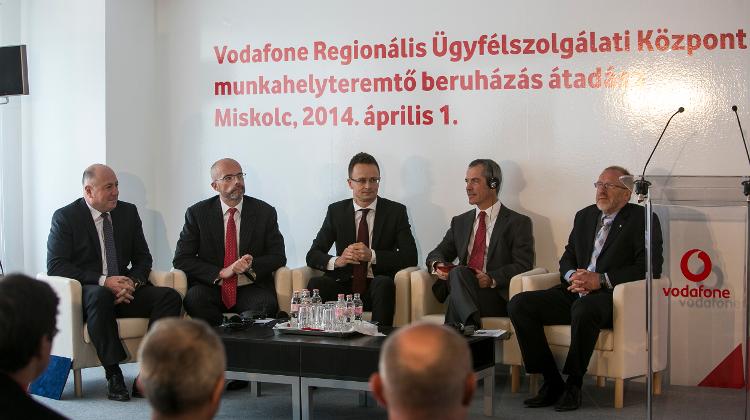 “Over the next year and a half Vodafone will add 240 employees and raise the headcount at its regional customer service center in Miskolc to 540,” said CEO Diego Massida when unveiling the new office wing on Tuesday.

The HUF 450 million investment in progress will take Vodafone’s overall spending in Miskolc past he HUF 1 billion mark and will boost the area used by the company in the Macropolis office complex to 4,200 sqm from 2,700 sqm, Massidda said.

Vodafone’s expansion is yet another proof of Hungary’s increasing competitiveness, said Peter Szijjarto, State Secretary for Foreign Trade Relations at the Prime Minister’s Office. As he put it, “one of the globally most well-known and most recognized companies has expressed its confidence in Hungary, and this trust is mutual. If it wasn’t, it wouldn’t be Vodafone that expands its regional customer service center in Miskolc and it wouldn’t be Vodafone that provides mobile services to state institutions over the next two years, he said.

As a result of the ongoing investment, the Miskolc center will service Vodafone Hungary’s more than 2.6 million customers, said Diego Massidda. The regional customer service center opened five years ago received an excellent rating from 90% of customers so far. Over the past years, colleagues at the center have responded to hundreds of thousands of written queries, responded to more than 9 million calls and talked for 46 million minutes, while also providing services to not only Vodafone, but also customers of Hungary’s only real virtual mobile provider, Tesco Mobile.

Vodafone, which is in its 15th year in Hungary, has made a good decision when it chose to open its service center in Borsod county’s center based on the experiences so far, said György Beck, president of Vodafone Hungary. Vodafone, which employs altogether 1,340 people in Hungary, found a second home in Miskolc and is thus playing a significant role in the city’s culture and sport.

Developing the local economy is our priority target and we welcome any new enterprises and appreciate the ones already present that contribute to the growth of Miskolc, expand, preserve and create jobs in the region, said city mayor Ákos Kriza. He stated the importance of creating employment that not only provides locals with a salary and sustenance, but also compels them to stay in the city. This is why the local municipality decided to support the latest expansion with HUF 130 million, since it creates another 240 jobs and paves the way for a further HUF 450 million in investment.

Over the course of 15 years, Vodafone has paid nearly HUF 300 billion in various taxes and invested more than HUF 212 billion, while the Vodafone Hungary Foundation spent more than HUF 1 billion on programs mainly aimed at tapping the potential in mobile technology.

Vodafone Hungary, as the subsidiary of one of the world’s leading mobile providers is one of the biggest investors in Hungary. Vodafone’s Hungarian operations contributed to the promotion of British corporate culture and its success has helped encourage other British companies to consider doing business here, thereby contributing to the improvement of bilateral relations, said British Ambassador to Budapest, Jonathan Knott.

Thanks to the investments of the past years, Vodafone Hungary has reached a high speed mobile internet coverage of 98.3%, which is exceptional within the group as well as all of Europe and allows 66% of the country’s population to connect to the 42 mbit/sec HSPA+ network. Through the development of the past years, Vodafone has reached hundreds of townships that had no mobile broadband service up to that point. Vodafone offers now indispensable high-speed broadband mobile internet to 1.2 million people, connecting them to family, friends and business partners.

Vodafone is the world’s leading M2M (machine to machine) provider and plays an important role in rolling out the “internet of things” through ventures essential for the national economy, like connecting electronic cash registers and supporting the electronic road toll system. Furthermore, Vodafone was selected at the start of 2014 in public procurement to provide the Hungarian state with mobile service for the next two years.