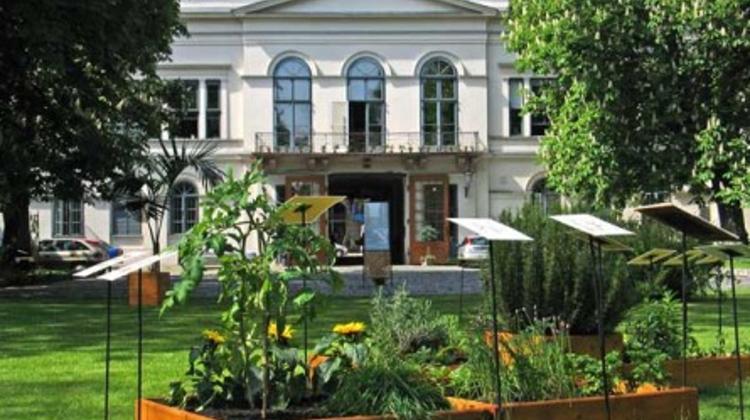 In 1928, the capital bought the building – located at 1053 Budapest, Károlyi Mihály utca 16. - for 5 million pengős (the Hungarian currency until 1946) as a worthy place to house the collection of the Budapest Picture Gallery. The private palace was turned into a public building and stripped of everything that was thought not to be in keeping with this: its textile hangings, chandeliers, wall-mirrors, fireplaces and movable property were all removed.

In 1932 the interior furnishings, the rich picture gallery and the treasures of the silver chamber were auctioned off. In 1953, after 21 years, the Budapest Picture Gallery closed down and its collection was added to that of the Museum of Fine Arts.

Established in 1954, the Museum of Literature Petőfi was opened here in 1957. Until 1998 the institution shared the building with the repository and workrooms of the Hungarian National Museum and the Budapest History Museum. The plan of the latter to move out provided grounds for major renovation of the building, which took place between 1998 and 2000.

Designers of the architectural project and art history experts contributed so that the building could well serve the three main functions of the Museum of Literature Petőfi: the exhibitions, the scientific research and processing work, and the organising of events.

Today this impressive building in Budapest is an important relic of the capital’s neoclassical architecture, only the outside walls of the present Palace originate from the 17th and 18th centuries. Its architectural emphases and decorations were, almost without exception, built in the reform period between 1832–1841, during the extensive reconstruction work associated with the Károlyi family name.

The building is the most important of the 19th-century aristocratic palaces in Pest, and its architecture is in keeping with its cultural and historical significance and the historic moments that it witnessed.

With its balanced, pure forms and restful proportions, the two-storey building appears unexpectedly from among the commotion, among the high buildings of the narrow streets in the inner city. The strong, broken dividing cornices, the windows connected with arched, transom architecture lead the eye across the main front of the building. Above the three-wing doorway opening in the middle, a balcony juts out with its stone consoles and ironwork.

The stepped gable above is crowned by the Count’s coat of arms of the Károlyi family. On the escutcheon is the family’s heraldic animal, the sparrow hawk, ascending with a heart in its claws.

The Ferenczy Street side maintains a neoclassical division similar to that of the main front. The side entrance with a straight hood mould is flanked by two Tuscan pilasters. The side on Henszlmann Street was built after 1934, after the demolition of the neighbouring Harruckern-Wenckheim house, as a careful adaptation of the original architecture. On walking through the woodbrick-paved carriage-entrance, you come to a grassy courtyard behind the main front of the Palace, which is surrounded by the U-shaped wings of the building.

Railings separate it from the recently renovated Károlyi Park, which once belonged to the Palace and extended it as far as Magyar Street. It has been public property since 1928. From the garden, the sheer size of the impressive, two-storey inner front of the courtyard is revealed before us. Above the three-axle middle-bay doorways ending in a tympanum, the central motive is once more a balcony, onto which the arched windows of the Museum Library open.

Owing to the restoration that affected the whole building and was completed in December 2000, five of the beautiful series of halls in the main wing facing Károlyi Mihály Street have retained their original form. These are the Ceremonial Hall, the Balcony Hall, the Scarlet Hall, the Lotz Hall and the Hall of Mirrors. The reconstruction of the historical interiors and the renovation of the textile and paper hangings, the gilding, the imitation marble and the stuccowork were completed with the reconstruction of the fireplaces and chandeliers.

Most impressive is the Ceremonial Hall (120m2) with its five windows and marble revetment, and its three enormous mirrors over the hand-carved marble fireplace. Each of the window apertures and the two doors and three mirrors opposite are flanked by two pairs of richly gilded pilasters with Corinthian capitals, while at either side of the entrances in the shorter walls, pilasters stretch upwards to the cornice under the opulently decorated stuccoed ceiling. Next to the Ceremonial Hall the white walls of the Balcony Hall (78m2), with its three windows and opening onto the iron-work balcony of the main front, are covered with imitation marble.

The reception room, which is now called the Lotz Hall (96m2), was named after the mural on the ceiling. Károly Lotz’s (1833–1904) work depicting the Muses was moved here in 1942 from the Wodianer Palace, which was to be demolished (3, Liszt Ferenc Square), to the institution which at the time functioned as the Budapest Picture Gallery.

Click here for more from the source: Petőfi Museum of Literature