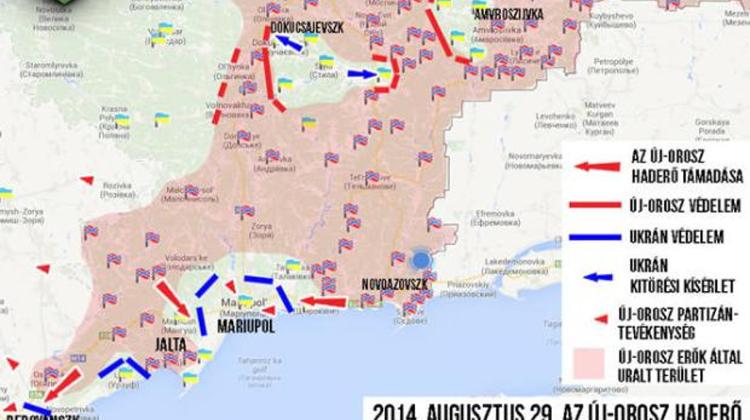 There has been a lot of discussion about the Russian sympathies of the extreme right parties in Europe. I have written extensively about Jobbik’s close ties with Russia. I’m sure that many readers remember the strange story of Béla Kovács, Jobbik EP MP, who, by the way, was just barred from the territory of Ukraine by the Ukrainian government. The reason? Most likely Kovács’s participation in the group that found everything in perfect order in the Crimean elections. Gábor Vona also visited Moscow, accompanied by Béla Kovács, and met important Russian political leaders.

The same affinity for Russia holds for France’s National Front, whose leader, Marine Le Pen, visited Moscow last summer and met similarly high-ranking politicians of the Russian Duma. Golden Dawn, the Greek fascist party, also has close connections to Moscow from where it receives financial assistance. When the Greek government imprisoned Nikos Michaloliakos, the party’s leader, Alexander Dugin, the author of Putin’s “Eurasian” ideology, actually sent him a letter in prison. Just to remind people: Gábor Vona also met Dugin in Moscow. And then there is Bulgaria’s far-right party, Ataka, that also has links to the Russian embassy.

All these parties and other right-wing fringe organizations support Russia’s annexation of Crimea and stand by Russia in the Russian-Ukrainian conflict. They are all against the European Union and the United States. Most of them are also anti-Semitic, definitely anti-Israel, pro-Palestinian and Iranian.

A previously lesser-known right-wing portal in Hungary, Hídfő (Bridgehead), has recently come into prominence. It was this site that first broke the story that Hungary is secretly supplying tanks to the Ukrainian army. One of their readers saw a tank being transported by train toward Debrecen, which the editors of the portal found suspicious. Soon enough word spread that the tanks were destined for Ukraine. The Hungarian ministry of defense explained that the tanks had been sold to a Czech businessman who deals in used military equipment.

As a result of its revelation Hídfő, which apparently has a readership of 3,000/day, became internationally known. And naturally that aroused the interest of investigative journalists in Atlatszo.hu, one of those NGOs that receive financial support from the Norwegian Civic Fund. They discovered a few interesting items about the organization that is likely behind Hídfő–Magyar Nemzeti Arcvonal, a Hungarist organization that came into being in 1989. Originally it was called Magyar Nemzetiszocialista Akciócsoportok (National Socialist Action Groups) . It considers itself to be the legitimate successor to Ferenc Szálasi’s Arrow Cross Party.

Hídfő, as far as I could ascertain, was established on September 25, 2012, or at least that is the date when the first article appeared. The portal is full of anti-Israeli, anti-American, anti-European Union articles while it is fiercely pro-Russian, pro-Palestinian, and pro-Iranian. Their Russian connections must be substantial. While internet sites normally invite readers to express their satisfaction on Twitter and Facebook, Hídfő has only Vkontakte, a kind of Russian Facebook.

An interesting article, originally published on tarsadalmivirtus.lapunk.hu, appeared in Hídfő in 2013. If one can believe the introduction, a single person writes all the articles; he sees himself as a great observer and analyst of international affairs. He also looks upon the European Union as an enemy that until now has been unable to grab only two countries: Ukraine and Belarus. But the EU has plans concerning Ukraine. If it manages to get hold of Ukraine, its influence in Europe would be complete while “Russia would be squeezed into the Asian region.” European pressure is great on Ukraine and in case of a civil war “it is possible that Moscow will try to save the Russian population and the country will fall into several pieces.” This, however, will not satisfy the European Union. The final step of the evil European Union will be “the execution of Russia.”

Romania will incorporate Moldova while the West will incite the Muslims of Russia to revolt. Eventually Russia will fall apart without any outside military action. Our man seems to know that “the Russian military leadership” has already worked out a strategy to prevent such an outcome. It includes the support of Russia nationalists in Ukraine, to be followed by “tremendous pressure on the Baltic states.” Whoever our man is, he predicted the events on the Russian-Ukrainian border fairly accurately.

Another far-right site is “Jövőnk” (Our Future). This Hungarist site has been in existence since January 2009. It would be fascinating to learn more about this group because the site suggests that they have plenty of money. They publish articles not only in Hungarian but also in English, French, German, Russian, Romanian, Slovak, and Serbian, which is a very expensive undertaking. The people behind Jövőnk are so enthusiastically pro-Russian that their articles could have been written in some Russian government office in Moscow and translated into Hungarian. This particular page will give you an idea about the editors’ infatuation with Vladimir Putin. In one of the articles there are enthusiastic lines about Putin building a Eurasian Empire, and not for a moment does the author worry about the implications of such an empire for his own country, Hungary.

A strange, inscrutable world about which we still know very little. We especially know very little about the nature of these groups’ ties to Russia and Iran. One can only hope that the Hungarian secret service is keeping an eye on these people, although I have my doubts about both the talent and the will of the security agents. When one reads articles in these extremist websites about the decline of the West and glowing descriptions of the East, one has the awful feeling that Viktor Orbán has quite a bit in common with these fellows. A rather frightening thought.