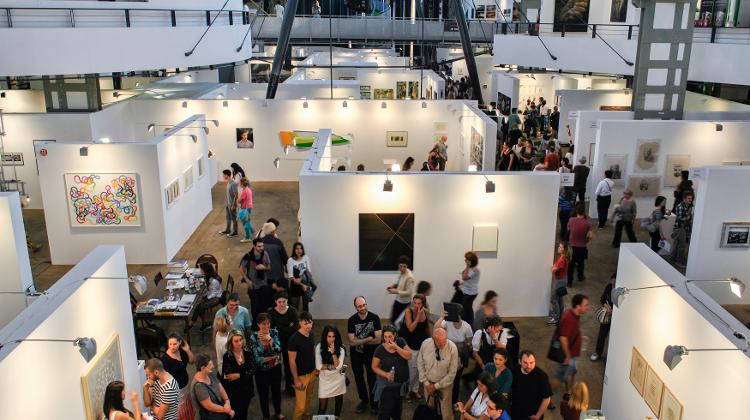 Art Market Budapest, built up on an area of some 6,000 square meters, as well as the complementary large-scale open air sculpture exhibition, offered the possibility for over 500 artists to have their works presented by some 100 exhibitors.

The nearly 30 exhibiting nations represented over the past years have continued to expand this year, with exhibitors arriving for the event from Austria, Croatia, the Czech Republic, Germany, Hungary, Ireland, Italy, Kazakhstan, Luxembourg, Poland, Romania, Serbia, Slovakia, Slovenia, Switzerland, Turkey and the USA. The fair attracted 24 thousand visitors: a new record after last year’s 22,000.

The collectors Marinko Sudac from Zagreb (owner of one of the world’s top avant-garde collections) and Stefan Haupt (Berlin) personally introduced selections from their collections.

The newly established exhibition section, called ART PHOTO BUDAPEST, the sole international photographic art fair in Central and Eastern Europe, strives to position Budapest as one of the new European capitals of photography. In the wake of the great Hungarian-born masters of the twentieth century who significantly influenced world photography, such as Brassai, André Kertész, Robert Capa, László Moholy-Nagy, and others, with a background insured by an institutional and educational system that is rich and possibly the strongest in the region, and with a professional base of photography found within the portfolio of nearly all Hungarian leading contemporary galleries, Hungary proves to be an especially suited location for the realization of a unique international photographic program.

Thanks to the exhibitors, who arrived from ten countries to participate in ART PHOTO BUDAPEST already in its first year, an entire exhibition hall was filled with photographic content of a high standard, on view nowhere else.

A professional day dedicated to the subject hosted many important experts in the photography of the Eastern European region, among them leading representatives of the art academies in Belgrade (SR) and Zagreb (HR), the House of Photography in Bratislava (SK), the Photography Collection of the Modern Art Museum in Olomouc (CZ), the Photonic Moments festival in Ljubljana (SLO), and many others.

The most memorable component of ART PHOTO BUDAPEST was the world premiere of the Eva Körner collection and archive, providing a selection of works by the masters of Soviet non-conformism and the Moscow conceptualism exhibited by ART+TEXT Budapest.

The special theme and an extraordinary focus selected by Art Market Budapest in 2014 was the “guest-starring role” of Berlin, perhaps the most culturally exciting European capital today. In addition to a dozen exhibition stands on several hundred square meters presented at the fair, events of the guest city program included international panel discussions and art performances featuring – among others – the street-art-style “re-painting” of the Berlin Wall by a Berlin- and a Budapest-based graffiti artist.

As an accompanying event of Art Market Budapest, during the fair, a selection from the unusual collection of renowned Berlin collector, Stefan Haupt, was on view under the title “Divided and Reunified”, in which the works of 27 artists, among them such stars as Joseph Beuys, were shown.

It is an outstanding success for the city of Budapest and Art Market Budapest that – as was announced – from 2015, the fair was selected to host “Art from Berlin” a special program sponsored by the city of Berlin and organized by the Berlin Galleries Association to support the international presentation of Berlin galleries. The program has previously been hosted in Istanbul, Seoul and Miami.

Exhibitors’ prizes established by partners of Art Market Budapest 2014 were also distributed: the jury assembled by Artmagazin awarded the Most Attractive Booth prize to Trapéz Gallery (Budapest); participants in the art education program awarded the B. Braun Prize to the galleries acb (Budapest) and Tammen & Partner (Berlin); while on the basis of an open voting process, the Fidelio Prize went to the award-winning booth of the Studio of Young Photographers in the ART PHOTO BUDAPEST section.

“The founders of Art Market Budapest were truly visionary to start their ambitious art project in some of the hardest years of the global economic crisis. The interest and attention Eastern Europe’s leading contemporary fair receives today proves them right. I’m sure when we all return home, the word will be spread about Art Market Budapest, and more of us will want to come and enjoy this inspiring art experience in the coming years.” – said Nancy G. Brinker.

Art Market Budapest chose a very spectacular way to say goodbye to its audience in 2014, with an 8-meter high urban installation erected on the fair’s closing day in co-operation with Gallery Out of Home by Hervé, on one of the main public squares in downtown Budapest.