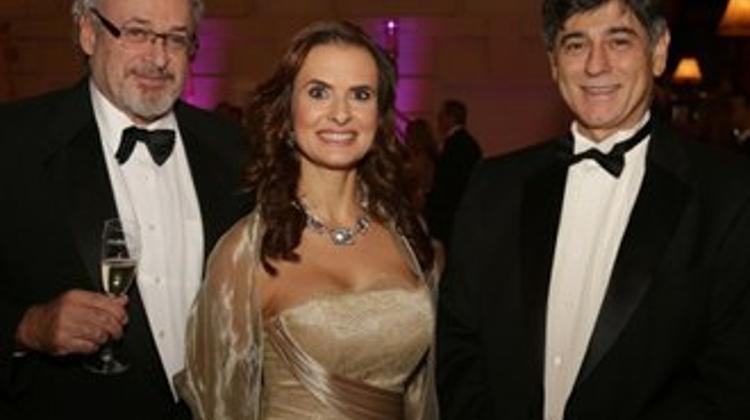 "We celebrated the 120th anniversary of the opening of the New York Palace with a grandiose gala evening. The management of the New York Café and Boscolo Hotel paid their tribute to the historical building with the gala event on 21th November.

The luxurious gala event for the 120th anniversary for the New York Palace was held in the lobby of New York Café and Boscolo Hotel with the intention of creating tradition.

At the event Mrs. Krucsainé Herter Anikó, the Head of National Cultural Fund of Hungary, Ms. Kinga Engelbrecht, the General Manager of Boscolo Budapest Hotel, and Mr. André Goodfriend who serves as Chargé d’Affaires a.i. at the Embassy of the United States in Hungary held a speech.

Mr. Goodfriend highlighted the interesting connection of the Palace and the city of New York.

Among the guests we welcomed Mr Ilan Mor the Izraeli Ambassador to Hungary ,moreover many illustrious personalities of the Hungarian business life.

Besides the delight of the exquisite four course menu of Chef András Wolf there were numerous prime programs for the entertainment of the guests. The great atmosphere of the evening was set by Artúr Berki the winner of the 2012 and2013 New York Café bar pianist competition. We revived the history, eras of the legendary building and its famous figures through a short movie composed exclusively for the guests of the evening.

The short film composed of archive footage and pictures from television news was coloured with the contemporary compositions of Dezső Oláh played live by the Hungarian Virtuosos Chamber Orchestra. The musical pieces recalled the well-known hits and music of the past with the contribution of opera singer Bori Keszei. Besides the music, theatre performer Ervin Nagy read parts from the work of writers of the Café.

On this special evening the collection of Hungaricum products came into spotlight as well. At the Nyugat Bar for example the guest could try the prime products of 4 world famous Pálinka houses (Zsindelyes, Békési, Bestillo, Spiritus Sprimus). In the White Saloon jewellery (Schoeffel Gyöngy, Frey Wille), porcelain (Zsolnay), and Hungaricum exhibition (Halasi lace, Kalocsai, Matyó patterns) took place. The new brand of Tünde Hrivnák called By Me was also presented in the evening, where the host of the event Éva Novodomszky wore a splendid By Me evening-dress creation.

The evening was featured with a tombola game where valuable prices were drawn. Among the prices there were a real pearl necklace, a Royal Clinics face treatment, a Frey Wille silk shawl, a one-week Jaguar test drive and a Neckermann travel for 4 people. The income of the tombola game was entirely donated for charity. The donation serves the recovery of the 10-year-old virtuoso heroine Vanessza.

We would like to thank all of our partners, that with their presence and donation they stood behind a right case and contributed to the success of the event."