Road Toll System In Hungary To Be Amended At Several Points 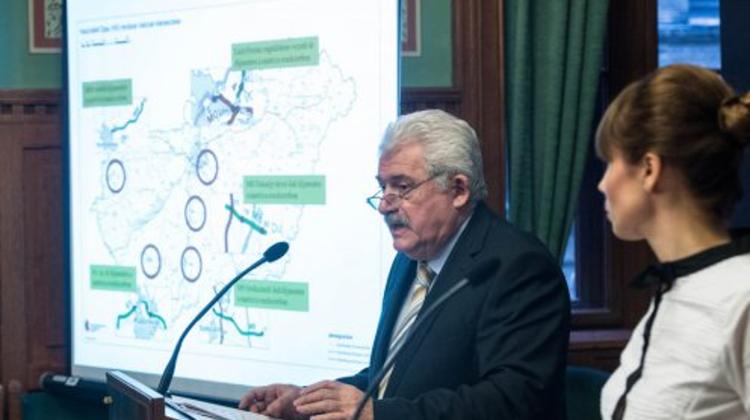 While reinforcing the theoretical foundation of the system, the government decided to make several changes in relation with the road toll system. According to the announcement made by János Fónagy, county vignettes will be valid up to the first exit ramp after a county border instead of the last one before the border as of 1 February, 2015, and there will be several new toll-free sections as well.

At their Wednesday’s session, the cabinet decided for several amendments in relation to the extended and fairer road toll system, government spokesperson Éva Kurucz said at a press conference on Thursday. By introducing the new regulation, the government’s intention was to make sure that road tolls are paid by people actually using the roads in future, while other important aspects were facilitating faster and safer transport and reducing the environmental burden on certain settlements, she emphasised.

Hungary’s expressway network is of excellent quality and the success of the new toll payment system is, among others, proven by the fact that almost 1 million vignettes were sold within 20 days, the government spokesperson underlined. Éva Kurucz noted that there are still issues to be solved, which is why the period of test run was so important, in order to find remedies for these.

The Minister of State for Parliamentary Affairs of the Ministry of National Development pointed out that he was convinced that in the case of a huge system like this “genuine experience would come with practice”; the system could not be planned with absolute precision beforehand.

This Monday, the Ministry listened to the opinions of 42 professional interest representation bodies and scientific organisations, transport and public utility companies, local and county authorities as well as local authority associations, he recalled. While these bodies mentioned their occasionally contradicting remarks or occasional reservations, there was general consensus among them that the introduction of county vignettes had been the right decision, Mr Fónagy emphasised.

Talking about the amendments approved by the government on Wednesday, based on the conclusions of the consultations, he said that as of 1 February, county vignettes will be valid up to the first exit ramp after a county border instead of the last one before the border. Thus the sections of M1 in Fejér County and of M7 in Veszprém County can be used with vignettes for the neighbouring counties and people regularly travelling between Budapest and Győr or Siófok will only have to purchase three instead of four county vignettes.

Broadened use could also be a solution to the problem of the Danube bridges of M8 and M9 motorways but the government decided to examine and treat this particular issue separately, the Minister of State added.

Motorway section to airport will be free

The cabinet decided furthermore that following the example of Megyeri Bridge, the use of the motorway bridges in Dunaújváros and Szekszárd will be made free of charge; thus there will be no vignettes required for the Pentele and Szent László Bridges at all in the future.

As an important change, the use of a few hundred meters’ section of Trunk Road 4 from Budapest to Liszt Ferenc International Airport will be made free of charge, too. In the case of the section of Highway M86 in Szombathely and the section of Trunk Road 61 in Kaposvár, toll collection will be suspended until the expressway connections are established. Similar to previous practice, the final network extension will be presented on national as well as county maps.

In cases related to the introduction of county vignettes, the government abolishes the service fee of HUF 1470, János Fónagy emphasised. Thus people who, in January, used tolled sections without being eligible for using them will, provided they purchase a valid vignette by the end of February, not only be exempted from the payment of a fine but will not be charged the usual service fee, either.

The Minister of State also revealed that there were on-going efforts to find ways to make the related administration more comfortable, e.g. to make arrangements by mail possible instead of having to personally visit one of the customer service offices of the National Toll Payment Services Plc. (NÚSZ).

According to the government’s decision, families with four or more children and persons with restricted movement are to be granted ex-post compensation in order to refund the difference between D2 and D1 toll categories. János Fónagy noted that the satisfactory solution of this issue might require an amendment in the legislation, due to which the legislative conditions for the compensation could be put in place by as late as April, but there would be compensation in any case.
On the first day of this year, the new types of vignettes were available at some 1,500, and on the first working day, at over 1,600 points of sale. Within a few days they will be available at all the 2,000 distributors.

From next Monday on, motorway vignettes will be available via the National Mobile Payment Network and they are expected to be available at mobile phone service providers from this week on already.