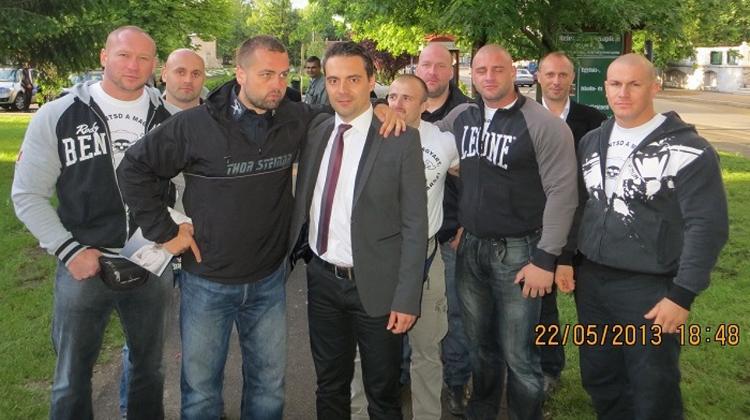 According to Jobbik MP Tamás “Roy” Sneider, extremist hate group Betyársereg (Highwayman army) needs fighters, Prime Minister Viktor Orbán’s mother is a Gypsy, and it is better to employ a Muslim as a personal secretary than a Jew. Jobbik must “project calm” and “must not appear violent” but at the same time “must divert Hungarian society in a direction which enables it to ‘radicalize itself”.

” All of this came to light from a recording released by the Vigyázó blog thanks to a reader who regularly attends Jobbik events. Sneider spoke to ATV’s Straight Talk Wednesday evening about the ominous recording, his personal secretary and the connection between Jobbik and Betyársereg.

Parliament deputy president Sneider visited Szekszárd in autumn 2014 to attend the unveiling of a sign written in old Hungarian script. There, in a meeting with Jobbik activists and members of Betyársereg, he expressed “strong” opinions on several subjects.

When asked about his personal secretary, Zsolt Dér, decision to convert to Islam, Scneider said: “That doesn’t really bother me. He became a Muslim following the dictates of his heart. That’s much better than if he had joined the Jewish faith.”

Sneider attributed the restlessness of the Muslim world to the United States and Israel, and said “we’re better off being on good terms with the Muslim world because there is serious potential business opportunities there.”

Zsolt Dér is a veteran of the Yugoslav wars, who fought in Bosnia on the side of the Muslims against the Serbs. In an interview appearing on the Betyársereg website, Dér announced that he had been a believer in the Muslim faith for over six years and referred to Islam as “an island of peace and calm.” He said that in Bosnia he had met Muslim fighters who were intelligent, respectable and kept their homes clean”, whereas the non-Muslim fighters (Dér included) “wallowed in mud and reeked of alcohol all the time.”

Betyársereg founder and leader Zsolt Tyirityán praised Dér in 2011 during a discussion organized by Szent Korona Rádió (holy crown radio) telling the audience that “fighting spread to Bosnia, at that time he also returned, but this time not to protect Hungary but to kill, and for this reason he deserves a round of applause” which he promptly received.

In 2012 Dér was banned from parliament by speaker László Kövér, an action Sneider attributed to the fact that “some extreme liberal media” had put lies in Dér’s mouth.

On the recording Sneider is heard telling Jobbik and Betyársereg followers that “Hungarian society must be diverted in a direction that enables it to radicalize itself so that national self-awareness awakens.”

He then turns to the subject of cooperation between Jobbik and the Betyársereg. “We have to acknowledge that a division of labor is required, and this is why it is good that there is a Betyársereg and (radical right-wing young movement) Hatvannégy Vármegye Ifjúsági Mozgalom (HVIM) because they can do what I cannot do in parliament.” Sneider said he could not phrase things the way those groups could, because he had to take care to ensure that the “simple citizen, who, shall we say, has no national feeling, will still find Jobbik sympathetic and vote for us.”

In an article posted the next day on Betyársereg’s website, Tyirityán claims there is no strategic alliance between his organizatinon and Jobbik: “We are not fighting on the same front, although we have the same opinion when it comes to the value system of average people”. In the article he denies that Dér is a member of his organization.

Sneider continues on the recording by saying “I would gladly continue being a fighter”, claiming that others put him in his current place. “Regardless of that nothing has especially changed in terms of our vision, in fact nothing has changed at all, only the communication. We have to take care not to appear violent, and to project calm.

“When I talk about how to communicate, then again here are the old people. Without them it soon won’t be possible to hold an election, because so few members of the middle class and youth vote, soon the pensioners themselves will be able to elect a government.

“Now you have to be a kind, darling child when you speak to them. (…) The reason we are so strong in eastern Hungary, as well as in many places in western Hungary . . . is because Gypsy criminals come and kill the older people, and that is why it is good to talk about this now. A lot of older people vote for us because we protect them. What does an old person want? Peace. Calm. It is necessary to project this. And for this reason we mustn’t appear very violent because then they”ll say, ‘Yikes, these guys won’t be any better than the Gypsy criminals!’”

Sneider is heard telling the group that “I did not believe for a long time that Viktor Orbán was of Gypsy descent, but yes, his mother is a Gypsy. A correct Gypsy. They say she is very correct. His father, who is Hungarian by the way, is much worse.”

Sneider told ATV Wednesday that he believes “Gypsy crime exists in Hungary even if (former president of the parliament) István Újhelyi wanted to ban the expression.” “The proportion of criminality among Gypsies is higher” Sneider says, adding “there are historical and economic reasons for this.”

Sneider claimed that he does not know the Betyársereg. When asked why he said on the recording that “they can do what I cannot do in parliament” he started to outline the reasons why the Betyársereg and similar organizations exist. Returning to the question, Sneider aknowledged that they attended one another’s events, adding that among HVIM members there were numerous Jobbik members as well. However, he claimed that there was no connection between Betyársereg and Jobbik.

Sneider told ATV’s Olga Kalman that “it is not necessary to distance oneself from an organization with which one has no particular connection.” On the subject of his personal secretary, he said that he was a war veteran, but that he had no knowledge of Dér being a member of the Beyársereg. He called “ridiculous” the notion that Dér returned to Bosnia “because he wanted to kill.”

At the end of the interview the deputy speaker of parliament referred to the Speaker, László Kövér, as a “comrade”, which he quickly corrected to “Mister”.