Synthetic Drugs: Hungary Is Sitting On A Ticking Time Bomb 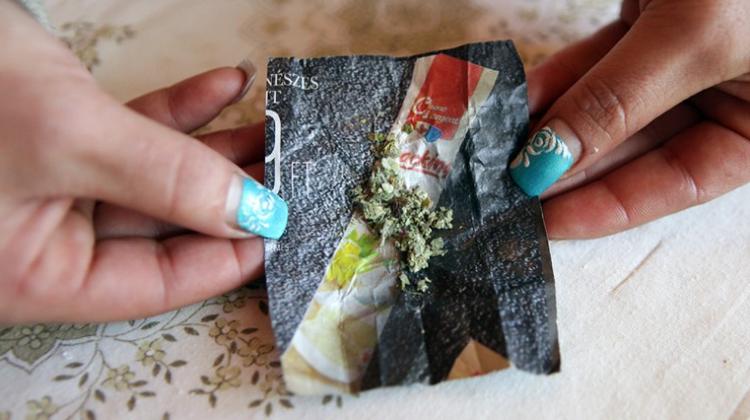 The recent disturbing rise in the consumption of cheap and unregulated substances known as “designer drugs”, which have recetly resulted in several deaths across the country, could mean that Hungary is sitting on a ticking time bomb and the country is on the edge of a new type of public health crisis, journalist Csaba Lukács writes in the daily newspaper Magyar Nemzet.

A man under the influence of drugs attacked a policeman at a petrol station in the town of Ajka, western Hungary – the ex-convict boxer first went on a rampage in the station’s convenience store and then inflicted life-threatening injuries on the patrolman, who arrived to fill up his petrol tank, and then tried to steal his car. The raving man was finally subdued by six policemen arriving as a backup, while the officer injured on his skull was taken to hospital in an ambulance.

This past Sunday, several residents called the local police station reporting that a knife-wielding man is shouting and kicking garden gates in the northern village of Zagyvaszántó. The man, who was found to pose danger to both himself and the public, was located on a yard, shouting with the property’s owner, an elderly woman. After being handcuffed, an ambulance was called to the deranged man, but arriving paramedics were unable to save his life – the 35-year-old man is supposed to have died of a drug overdose.

On the same day, a 30-year-old, naked man went on the rampage in the early hours of the afternoon in the northern town of Szécsény, with a knife in his hand. He entered a single-family house, demanded medicine from its inhabitant, broke its windows and then vandalised a vehicle in his way after emerging.

The out-of-control man was found by patrolmen from the local police station on the yard of a pub and was handcuffed after attempting to flee. Police called ambulance staff to the man, whose rapidly deteriorating medical condition had been giving ground for growing concern. Despite an attempted resusciation and swift medical attention, the man could not be saved, According to a preliminary doctor’s opinion, the man’s death was caused by an overdose of the synthetic drug “spice”.

Some weeks ago, a naked man frenzied in Baross utca, Budapest; later, his circulation collapsed and despite a successful resusciation attempt by paramedics, he later died at a hospital’s toxicology unit – he was reported to have consumed the drug “zene”. In May, another man ran amok and then collapsed at Blaha Lujza tér, also in Budapest, also after taking “zene”.

A similar case also happened at the Basilica – the substance causes hallucinations in whch consumers believe than insects are crawling on and beneath their skin , causing them to tear off their clothes. This has led experts to call it the “nudity” drug, which they consider highly dangerous: apparently, eight out of ten users end up in toxicology units.

No end of people have similar stories – not long ago, I was going home on foot from the editorial office on foot when I notice a youth overturning rubbish containers. His companions were loudly laughing at his actions, and when I asked them why they are allowing him to do it, one of them answered: Jano “has stoned himself like a zombie” from HUF 500 ($2) and the stuff now must be let to work.

It’s now a matter of fact: the Hungarian market has been flooded by cheap, uncontrolled designer drugs that are yet to be made illegal. They are marketed under several well-sounding names, such as bath salt, dried incense herbs, sage, nutrient solutions or insecticide, but both the seller and the buyer are fully aware what they will be used for.

They are cheap, but even the dealer is unaware of their exact content and their side-effects also remain unclear. They are unscrupulously advertised on the Internet – searching for the word “herbál”, the first hit is a page advertising the product as “legal weed” with the following slogan in giant letters to try to attract attention: “You’ll throw your head away! Same-day delivery on weekends to! Order and try it!”

Experimental youths are sent a sample with free delivery and they are also looking for distributors. However, they are careful to consistently refer to the “medicinal plant webshop”‘s (!) products as incense.

Social workers recall times when their clients were users of traditional hard drugs almost with a sense of nostalgia.

These were relatively pure substances with well-known side effects and consequence and because their price was rather high, this meant something of a natural barrier to their use – drug users were simply unable to buy as much as they would have wanted to.

By today, these substances have been all but forced out of the market, their place taken over by various cheap mixtures, such as synthetic cannabinoids and other stimulants legally imported from China by the kilo. Plant mixtures, pesticides, air fresheners, incenses, powders and pills, all of unknown content.

It can be smoked, inhaled, injected intravenously or simply swallowed – the main thing is for it to have the desired effect and be available for a couple of hundred forints. In most cases, users are uninterested in the effects the substances have on the human body and psyche, and their short and long-term risks are basically unknown. Some of them can’t be detected by traditional urine tests – although this is more of an advantage for drug users – and certain synthetic “incense”‘s strength can exceed marijuana four times.

The shocking tendency is also reflected by surveys. Research conducted in 2013 by the Institute of Psychology at Hungary’s largest university ELTE revealed that while cannabis remains the most popular drug among the Hungarian population aged between 19 and 65, it is immediately followed by synthetic cannabinoids and ecstasy.

The most astonishing relevation is that every sixth consumer who has ever experimented with drugs did so for the first time aged 15. Moreover, it could be the case that two years have been enough for the survey cited above to be outdated: according to an April report by the news website Index, such drugs have basically flooded rural Hungary and are now used by far younger children. In a certain Eastern Hungarian village, seven to eight-year-olds proudly recalled their knowledge on designer drugs.

According to the report, youths steal “pálinka” – home-made fruit brandy – from home not to drink it but to sell it to buy “spice”.

Among people living in extreme poverty, cheap alcohol has been replaced by cheap drugs as the primary source of addiction, which threatens with unforseeable consequences in the field of health and public safety – examples listed at the beginning of the article prove that drug users intoxicated from unknown substances do not reflect on their actions and even attack police officers. And what happens if the junkie confronts not a policeman but an infant, a vulnerable woman or an elderly person in this condition?

I’m worried that a dozen or so tragedies will have to happen for the world of politics to recognise the unsustainable situation that has cme into being and react with swift lawmaking, effective police investigations and interventions, and the reorganisation of social and health care services to this serious and increasingly alarming situation.

The situation now is that those caught with a cannabis-laced cigarette can be hit with a hefty punishment, but the sale of a whole kilo of designer drugs with the potential to turn a whole village into undead zombies can be completely legal if the substance has nto yet been outlawed.

We are sitting on a social time bomb – some experts believe that the use of cheap drugs in villages is so widespread that it may bring about the dramatic physical and mental degeneration of the population within some years.

Of course, the responsibility of courts is also a major question; if criminals can get away with a burglary or violent assault – e. g. on a police officer – committed under the influence of drugs wiith a suspended sentence or short prison term, the sentence will have no deterring effect and perpetrators will be free to carry out the next offense.

Before we’d think that this problem concerns only – typically Roma – youth living in extreme poverty, we should know that it is habitually used also by middle-class youngsters, mothers with families and pensioners. Spice, crystal, “zene” – whatever’s at hand. What counts is for it to be cheap.