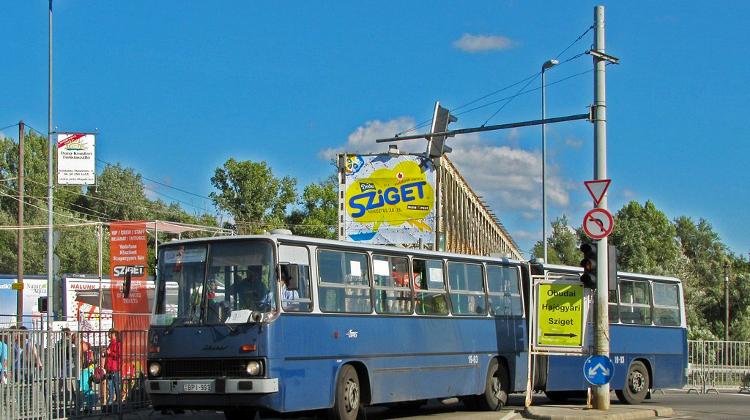 As you know, the Sziget Festival is held on Óbuda Island, this year for the 23rd time from Monday 10 August to Monday 17 August 2015. BKK provides higher frequencies on suburban railway line H5, which runs again on the full length of the route from 9 August and also on tram line 6, operates vehicles with bigger passenger capacity on night lines 901 and 918 and is launching special dedicated transport services. BKK recommends taking public transport to reach the Óbudai-sziget as fast as possible. Visitors in possession of a CityPASS wristband valid from 6 August will be able to use public transport services free-of-charge.

During this year’s, the 23rd Sziget Festival

From Monday, 10 August 2015 until the last day, a BKK Customer Service Point will be operating at the venue of the Sziget Festival. An Ikarus 260 type bus converted for this event will be open every day from 10:00 to 18:00 near the main Sziget entrance by the K-híd (bridge).

In addition to being able to purchase different types of public transport tickets, passes and travelcards, you will be able to gather information on our products and services from our colleagues who speak different languages. Our representatives will also be ready to help you with advice on how to reach your destination by public transport in Budapest.
MOL Bubi at the Sziget Festival

You will be able to get familiar with the MOL Bubi public bike-sharing system and give it a go at the demo docking station.

Take public transport to the Sziget Festival on Óbuda Island

The venue of Sziget Festival is Óbuda Island located in district 3 in Budapest. Access is recommended by suburban railway line H5 from the “Filatorigát” station, alternatively by the dedicated boat service, by buses 9 and 86 from the “Óbuda, Bogdáni út” terminus or from the “Kaszásdűlő H” stop of buses 34, 106, 134 from the city centre, Kőbánya and South-Buda.

Please check the following maps on how to get to the Sziget Festival.

Suburban railway line H5 departs from Batthyány tér and can be easily accessed at the following connection points:

In addition to the above, BKK launches special direct services to Óbudai-sziget: only the Sziget-Budapest CityPASS entitles festival-goers to use the shuttle bus transfer services to and from the airport as well as the special boat service to the island. The boat service can also be used without the CityPASS by buying tickets on board at the price of HUF 900.
HIGHER FREQUENCY AND MORE CAPACITY ON SOME OF OUR PUBLIC TRANSPORT LINES

Bus 200E is running more frequently at night between 8 and 12 August and the last bus to the city centre will depart at 0:36 instead of 0:21. Public transport lines departing from Liszt Ferenc International Airport Terminal 2 between 23:00 and 0:36 will run to Határ út M, instead of Kőbánya-Kispest M.

Night buses 901 and 918: service will be provided by larger-capacity articulated buses from Óbuda to the Hungária ringroad from late night on Monday, 10 August to the early morning on Monday, 17 August.

Between Monday, 10 August and Sunday, 16 August dedicated boat services connect Petőfi tér (Erzsébet híd) and Óbudai-sziget as well as Jászai Mari tér and Óbudai-sziget. CityPASS holders can use the boat service without extra charge; all others require a ticket on board for 900 HUF. Between 9 and 16 August 2015, the Óbuda-sziget stop is not served in either direction by boat line D13.

From Saturday, 8 (Saturday) August to 12 (Wednesday) August – during the days of “moving in” – and the first days free direct transfer service is provided from Terminal 2 of Liszt Ferenc International Airport to Sziget (Óbudai-sziget) only in the direction from the airport to town every 30 minutes between 8:45 and 00:30 at night exclusively for Budapest CityPASS holders. To pick up your CityPASS please stop by at BKK’ Customer Service Centre at the arrivals level of Terminal 2B.

On Monday 17 August – the day of “moving out” – free direct transfer service is provided from Sziget to Terminal 2 of Liszt Ferenc International Airport only in the direction to the airport every 10 minutes in the early hours, every 15 minutes in the morning and every 20 minutes later on between 3:00 in the morning and 14:00 exclusively for Budapest CityPASS holders.

The front-door only boarding rule applies on this service, which means that bus drivers check whether passengers are in possession of CityPASS wristbands before they board.

Road & traffic restictions in the area of Óbuda Island

For security reasons, please note that traffic restrictions will be in place again during the Sziget Festival in the area of Óbuda Island. From 20:00 on Friday, 7 August to 18:00 on Tuesday, 18 August the section between Mozaik utca and the Auchan connection road of Jégtörő utca will be closed, also the section between Mozaik utca 16. and Jégtörő utca will be closed. In the Mozaik utca–Jégtörő utca–Óbudai rakpart junction, the blinking yellow light of the traffic light will be in operation during the event.

As the Sziget ticket offices will be located in the parking area near the intersection of Jégtörő utca and K-híd leading to the island, it will be prohibited to stop there.

At the request of the Budapest Police, car access will be prohibited to the section of the lower Buda embankment between Halász utca and the Mozaik utca junction – with the help of police cordons – every day from 18:00 to 22:00 between 9 (Sunday) and 17 (Monday) August. Car access to the closed section of the embankment is possible for direct traffic only based on the evaluation of the police.
Taxi services

The official partners of Sziget are City Taxi and Budapest Taxi. The taxi services will be monitored and controlled with special focus in the Sziget area.

For the event, two types of CITYPASS wristbands will be on sale:

The orange 48-hour CityPASS ticket is provided with the ‘’Sziget Budapest CITYPASS” label, with a unique serial number, and next to this number (vertically with smaller size) with “BKK and BUDAPEST SPAS” labels. Days of validity are represented on a black background next to the labels and between the valid days there is a reference to the two-day validity and to the ticket to be used only in an undamaged condition.

The green Sziget-Budapest CITYPASS pass is labelled with ‘’BKK’’, the “BUDAPEST SPAS” and the ‘’Sziget CITYPASS”, furthermore the validity period is indicated in English with yellow letters, discounts for public transport and for spas are indicated with black letters, the pass is provided with a unique serial number and there is a reference to the pass to be used only in an undamaged condition.

During the validity period, CityPass wristbands entitle you to an unlimited number of trips on public transport

within the administrative boundaries of Budapest on bus, tram, trolleybus, metro, cogwheel railway, suburban railway and ferry services and on work days only on riverboat lines ordered by BKK Zrt.
on the full length of the SZIGET–AIRPORT special transfer service. On these lines, only the SZIGET wristbands and upon arrival from the airport to the Sziget Festival, the Sziget wristband vouchers are valid.
on the special dedicated boat services. Those who are not in possession of a Sziget wristband require a boat ticket on sale by the organiser of the Sziget Festival.

The CITYPASS wristband is valid for travel only if worn on the holder’s wrist in an undamaged condition. The same holds true for the 48-hour CityPASS ticket with the difference that it needs to be validated by punching. The Sziget wristband is to be fastened by the plastic clip. Unfastening the clip, which is always clearly visible, will render the wristband invalid for travel.

The Sziget-Budapest CITYPASS pass entitles you to travel from midnight on 6 August 2015 to midnight on 18 August 2015 with no need to validate it. To validate the 48-hour CityPASS for two consecutive days in August 2015, please punch your pass on the part designated for validation.

Sziget CityPASS along with a bath coupon also ensures one-time free entry to any of Budapest’s many spas or swimming pools and 20% discount for all later visits with the valid CityPass wristband.

CityPasses are valid from midnight on Thursday, 6 August to midnight on Tuesday 18 August at the price of HUF 9,900.

The 48-hour CityPass is valid from the day of purchase to midnight of the following day at the price of HUF 3,600.

Wristband passes are on sale at BKK’s Customer Service points at the airport and at Sziget sales points as well.