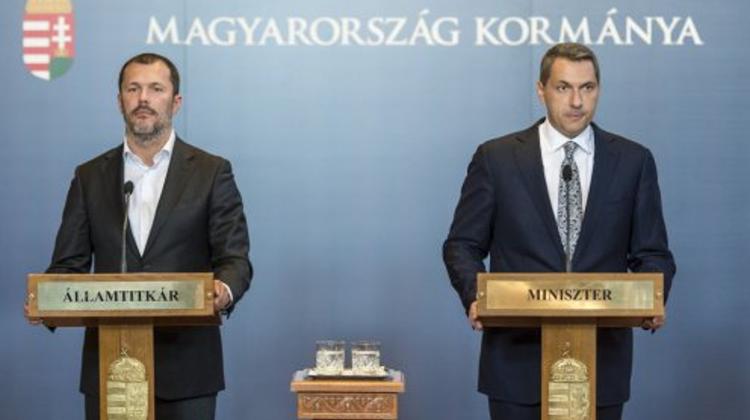 The Government will initiate a parliamentary debate on the quota system in order to acquaint itself with the views of the parliamentary parties on the matter before deciding whether to contest the EU quota decision before a court, János Lázár, the Minister heading the Prime Minister’s Office stated at his press conference “Governmentinfo 24 – What does the Government do and why?” held jointly with State Secretary for Government Communications András Giró-Szász.

In his words, the quota system is a typical example of “moral imperialism” which “Germany imposes on Europe”. The Hungarian Government regards the quota system as a grossly mistaken decision, he emphasised, remarking: he cannot accept that those who wish to take in refugees due to demographic or labour market problems or for reasons of conscience “should want to make us take in refugees as well”.

Mr Lázár further informed the press that Prime Minister Viktor Orbán will render an account of his talks in Bavaria and Brussels at the extraordinary meeting of the national security cabinet on Thursday afternoon, where mention will also be made of the protection of the Hungarian-Croatian border section. He remarked that the Government will continuously consult with the leaders of the neighbouring countries concerned in the next few days.

If Austria wants something else, it must bear the consequences

The Minister also reacted to the fact that Austrian Chancellor Werner Faymann stressed at the extraordinary summit held on Wednesday that if the fence is the price we have to pay for stopping the migrants, Hungary would be better off letting them through. Mr Lázár described this statement as dangerous, given that there may be as many as 30-40,000 people at the Croatian and Hungarian border, and indicated: the Chancellor’s proposal should be considered. He highlighted that, based on Hungarian experiences, the external Schengen borders can be protected, but if Austria wants something else, it must bear the consequences. “We must talk to Austria about what they actually mean by this grave statement”, he said.

The Minister further stressed: “the wisdom and volume of speech [of a great many European leaders] only extend so far as to tell us what is right and why we are Fascists”, but when a question arises such as who should cover the costs, they are unable to give an answer.

The Minister highlighted that an “absolute record” was broken on Wednesday: more than 10,000 illegal migrants entered the territory of Hungary, and with the exception of some one hundred people who came from the direction of Serbia, almost all of them came from Croatia. As a result, by Wednesday midnight, 242,000 illegal migrants crossed the border of Hungary in total this year, which is unprecedented, he said.

The head of the Prime Minister’s Office spoke of an organised operation; as he pointed out, with the closure of the Hungarian-Serbian border, the route has changed and illegal migration has been “diverted in an organised fashion” to the Hungarian-Croatian border section which seriously violates Hungary’s national security interests.

In his view, “what Europe is doing at present conveys unimaginable security risks”.

In answer to the question whether the Government has a settlement plan, Mr Lázár said: the cabinet has one settlement plan which relates to Hungarians beyond the borders for the event of an attack on them.

János Lázár to have talks in Brussels next week

János Lázár, the Minister heading the Prime Minister’s Office will conduct talks in Brussels next Tuesday regarding the capacity maintenance project of the Paks atomic power station. He will meet with EU Commissioner for competition Margrethe Vestager.

Mr Lázár told the press that he had been authorised by Prime Minister Viktor Orbán to attempt to reach an agreement with the commissioner for competition in Brussels on the conditions of the implementation of the Paks project.

Nándor Csepreghy to be appointed to State Secretary

Effective as of 1 October, Deputy State Secretary for Development Policy Communication Nándor Csepreghy will be appointed to the post of State Secretary and Deputy Minister at the Prime Minister’s Office, Mr Lázár announced.

The Minister heading the Prime Minister’s Office indicated at his press conference that he will continue to rely on the work of the current Deputy Minister László L. Simon, inter alia, in the fields of heritage protection, monument conservation and cultural relations.

Mr Lázár further informed the press that he thanked Márton Nobilis, the President of the National Office for Communication, who tendered his resignation on Thursday, for his contribution. The Office was set up with a view to streamlining the costs of government communications, and it implemented a public procurement worth HUF 25 billion in the summer. Márton Nobilis will assist the Government’s work in the area of public procurements in the future.

Deputy State Secretary for the Coordination of Infocommunications Gábor Bódi is leaving the Prime Minister’s Office, and as a result, the office of the deputy state secretary will also be terminated. In this context, Mr Lázár described the IT developments implemented as part of the modernisation of public administration and the Digital Hungary programme as successful projects.

He further informed the press that on Tuesday morning Prime Minister Viktor Orbán began consultations with his ministers, within the framework of which they are reviewing the status of the ministries and the work of State Secretaries. Personnel issues will be closed by 1 October.

In answer to a question regarding the structural changes within the Government – the establishment of the Prime Minister’s Cabinet Office – Mr Lázár said: he is concentrating on his work, “rather than on spin”.

At the press conference Governmentinfo, State Secretary for Government Communications András Giró-Szász was also queried about his future role in the Government. The State Secretary said in reply: he will discuss this issue with Prime Minister Viktor Orbán. “I have yet to have this discussion”, he added.

In answer to a question regarding the future of Governmentinfo, Mr Lázár said: the prospective leader of the Prime Minister’s Cabinet Office, Antal Rogán – who will be responsible for government communication as well – will have to decide whether there is a need for Governmentinfo. If he decides in favour of Governmentinfo, “I shall be happy to be at his disposal”, he said.

The head of the Prime Minister’s Office further told the press that he will conduct talks next week in Brussels with EU Commissioner for competition Margrethe Vestager regarding the capacity maintenance project of the Paks atomic power station. He added that he had been authorised by the Prime Minister to attempt to reach an agreement with the commissioner for competition in Brussels on the conditions of implementation.

Mr Lázár informed the press that the Government had paid to date EU grants worth HUF 8,200 billion from the financing cycle between 2007-2013, and due to foreign exchange profits, there is scope for the disbursement of another HUF 400 million. This means that by the end of the year, the total of payments will be somewhere between HUF 8,600 and 8,800 billion. 200,000 new jobs came into being over the period of seven years, the central budget made a profit of HUF 1,100 billion, and EU funds accounted for one tenth of the economic growth of the last few years, he added.

State-owned landed areas to be sold in public auctions

The sale of some 380,000 hectares of state-owned land was also mentioned at the press conference. Mr Lázár pointed out in this context: the public auctions will take place between 31 October and 31 December; the first auction announcements will have to be published by 15 October. At the same time, he described the protestations of Jobbik and MSZP regarding the matter as incomprehensible.

The socialists sold state-owned landed areas in auctions before 2010 under the supervision of Zoltán Gőgös, who was State Secretary at the time, he said. Regarding Jobbik, the Minister said: he regrets that Jobbik is on the side of large landowners.