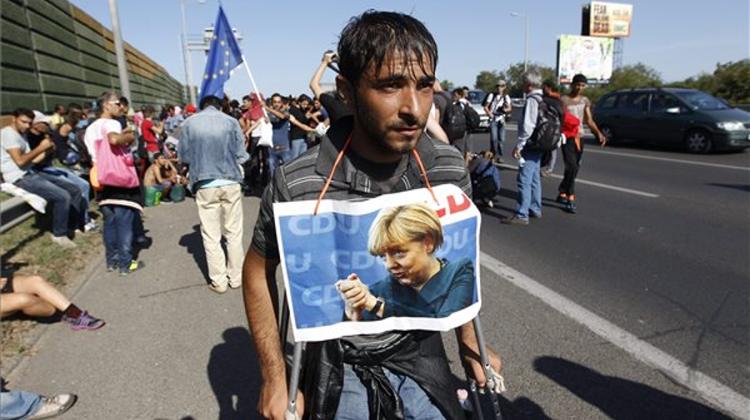 About 2500 migrants decided to leave Budapest on foot on Friday afternoon and started to march westwards, saying they were heading towards Austria and Germany. The crowd includes mostly men and younger migrants but also some disabled persons, as well as families carrying children. Around 4 pm the marching migrants, preparing to walk 175 kilometres to the border, have reached the M1 motorway where the traffic has been stopped.

Hungarian Police watched the silent migrants walk through Budapest but did not intervene, the AFP reported, adding there was no sign of conflict despite the migrants were causing traffic jams on their way out of the capital.

As for the situation at Bicske railway station, 30km west of Budapest, has remained unchanged as migrants continue to show “passive resistance” and refuse to be transported to a reception centre, a police official said. Migrants held a noisy demonstration amid a heavy police presence at Bicske railway station on Friday morning, where their train bound for western Hungary was stopped the previous day.

They spent the night on the stranded train, but in the morning they raised banners in the air with messages stating that they wanted to go to Germany rather than a refugee camp.

Around three o’clock in the afternoon about 300 migrants broke out of the reception centre near the Hungarian-Serbian border station of Röszke, complaining that assessments of their asylum applications were too slow. One of the migrants who broke out of the centre told M1 news channel that they were giving the authorities a two-hour deadline to assess their applications.

If the process does not speed up, they will encourage remaining migrants at the camp to break out too, he added. Csongrád County police said on its website that the migrants ran off in the direction of the M5 motorway after breaking through a fence at the Röszke collection point. Police have made the necessary measures to capture them all and stopped incoming traffic on the motorway to prevent accidents.

Meanwhile the Hungarian Parliament has passed a package of bills aimed at tightening up laws related to border protection and migration. Under the amendments, transit zones will be set up along Hungary’s border with Serbia, the criminal code will apply stricter penalties for human smuggling and damaging the border fence will be a crime.


The bill was adopted with 140 votes in favour and 33 against in the 199-seat parliament. In the preceding debate, the Justice Minister said refugee procedures will be faster and more efficient, the protection of Hungary’s borders will be expanded and criminal laws covering human smuggling will become tougher under the legal amendments.

Justice Minister László Trócsányi told lawmakers that the proposals affect ten laws. They take into consideration Hungary’s obligations resulting from the Dublin Regulations and the Schengen Agreement. The procedural guarantees included in international treaties and community laws will be maintained, and the amendments are also in line with constitutional and EU norms, he added.

The government will receive authorisation to announce a temporary crisis situation due to migration. Transit zones for seeing to migrant procedures will be introduced at the borders and the penalties in the criminal code for human smuggling will be toughened. Crossing the border illegally, damaging the border fence and hindering its construction will be added to the list of punishable acts included in the criminal code, he added.

At a press conference held on Friday near the refugee camp of Bicske, László Balázs, head of the border control department of the Hungarian police, noted that so far 162,980 illegal border entries have been registered in Hungary, of which 162,075 occurred on the Hungarian-Serbian border. In the past 24 hours police apprehended more than 3,000 illegal entrants and 11 human smugglers.

So far this year 900 human smugglers were arrested, compared with 593 in the whole of last year. The Interior Ministry told MTI that 150,611 asylum requests have been filed so far in the year, among them 50,413 Syrian nationals.