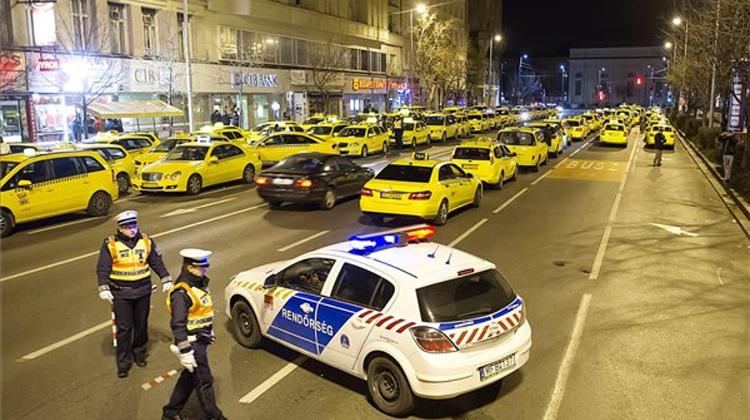 About 100-120 taxi drivers began an unannounced demonstration in protest against car dispatcher Uber in central Budapest on Monday morning. Taxi drivers lined up their cars at the junction of Bajcsy-Zsilinszky and Jozsef Attila streets and Andrassy Avenue, all major thoroughfares, Budapest police said on its website.

Lanes reserved for buses are blocked, police said, adding they were keeping one lane in both directions free. Bus services number 9 and 105 are running with short delays, the Budapest transport centre (BKK) said.

Signs on taxi windshields show “Uber” crossed out and “No thanks!”

One of the taxi drivers told MTI’s correspondent that telecom service providers should remove the Uber app from their web shops, otherwise they would continue to demonstrate.

“We’re prepared to be here for several days.” Laszlo Pusztai, representing one of the taxi companies, said that at the request of the police they would not block lanes elsewhere in the capital.

He added that the drivers would definitely continue the blockade until 11am, before making their way to City Hall nearby to hand over a petition.