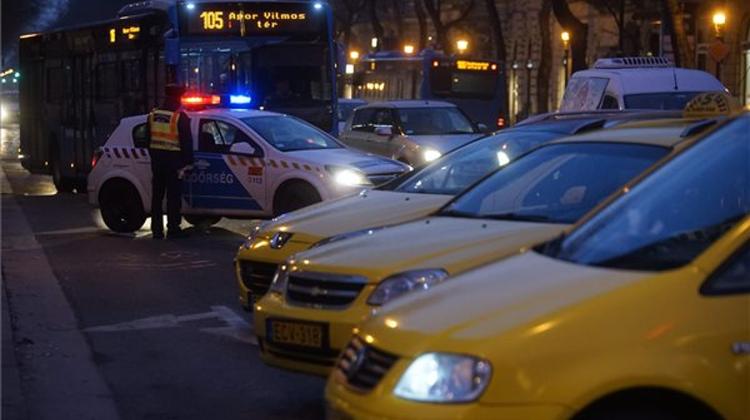 Taxi drivers demonstrating against car dispatcher Uber in central Budapest closed a section of Andrássy Avenue and Bajcsy Zsilinszky Road, on Monday. The protesters completely blocked traffic in both directions of the two major routes but reopened one lane in each direction after the Budapest police warned them that a complete blockade was illegal.

Zsolt Gelencsér, representing the taxi drivers, said that the demonstration was planned to go on till 8am on Tuesday. He said earlier that the move was in response to authorities ignoring their approaches for talks earlier in the day.

The drivers wanted to know from the transport authority, the economy ministry, the tax office NAV and Uber’s offices when their demands would be met, he said.

State secretary at the Development Ministry János Fónagy only said that his “heart” was with the taxi drivers, but could do nothing else, Gelencsér said. Later in the day, Fónagy met representatives of the protesters, and the ministry said that the government would “continue to do its utmost to ensure the security of passengers and ensure and environment in which taxi drivers can work and make a living”.

The government supports lawabiding and tax-paying taxi drivers, the ministry added. Meanwhile, taxi trade union MTSZ said that Uber’s operations were not in line with legal regulations. While taxis were required to meet stringent technical requirements, “Uber’s cars are not checked and nobody is interested in their technical condition”.

Whereas obtaining a taxi licence required considerable investment, starting an Uber business involved no more than a “passing idea”. Taxi drivers have mandatory tariff system, which Uber does not, and can offer lower fares, MTSZ said.

The demonstration started on Monday morning with 100-120 taxis that blocked several lanes at the Bajcsy-József Attila-Andrássy junction, but left one lane free for traffic to pass at the time. Signs on taxi windshields showed “Uber” crossed out, “No thanks!” and “Ban Uber!” A taxi driver said that telecom service providers should remove the Uber app from their web shops, otherwise they would continue to demonstrate.

“We’re prepared to be here for several days,” he said. The taxi drivers said their action is not politically motivated. Several taxi drivers drove their cars to the City Hall at 11am to present a petition and they held talks with Mayor István Tarlós, but only received support “in principle,” they told reporters after the meeting. In a statement released after the meeting, Tarlós said “tax-paying Hungarian taxi drivers who follow the rules” could continue to count on the capital’s support in the Uber matter. “Uber drivers do not comply with the capital’s tax decree,” he added.

“The goal of the capital, with the cooperation of the central government, is to ensure legality; that is, everybody’s compliance with the taxi decree,” he said, adding, however, that the city has neither the “official means” nor the “physical possibility” to prohibit or shut down Uber.

Uber said the demonstration has proven the need for modern passenger transport regulations that take new technologies into account. Talks with officials about the introduction of such regulations are ongoing, it said.

Government office chief Janos Lázár said the cabinet would discuss the taxi drivers’ case at its meeting on Wednesday. He said all parties would be consulted.

There are about 1,200 Uber drivers in Budapest and the service has about 80,000 users, Uber said last week.

With No Agreement, Taxi Demo Continues In Budapest