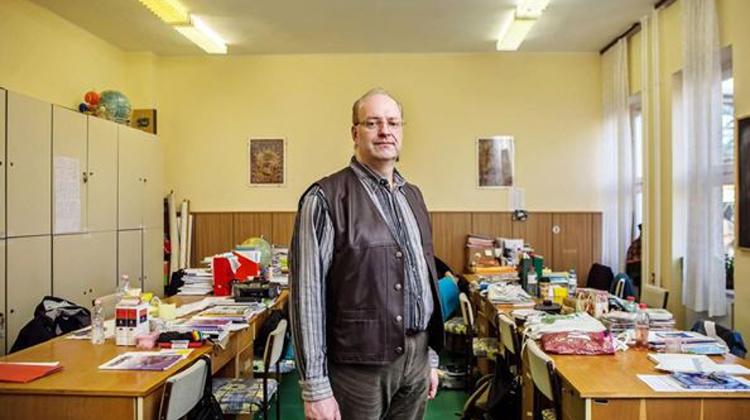 I have the distinct feeling that something is afoot in Hungary, something the self-satisfied Orbán government is not prepared for. I see the beginnings of a movement that may well overcome the current apathy and resignation of Hungarian society and produce active resistance to the Orbán regime.

What do I have in mind? Primarily, the revolt of the teachers and the healthcare workers. It looks as if dissatisfaction in these professions is so great by now that a few brave people’s call for action has already moved thousands.

Today I will talk about the revolt of the teachers. It all started with a letter the teaching staff of a Miskolc high school wrote to the head of the local school board on November 27, 2015, complaining about the chaos created by the changes in the Hungarian school system since 2010. It is a well-known fact that the Hungarian education system is in shambles, almost exclusively as a result of the badly conceived and executed nationalization of all public schools.

Viktor Orbán’s harebrained ideas, as implemented by an old-fashioned schoolmarm, Rózsa Hoffmann (KDNP), have been a resounding failure. The third culprit in undermining the educational system is László Parragh, president of the Hungarian Chamber of Commerce and Industry, who convinced Viktor Orbán that blue-collar workers don’t need much education beyond being able to handle a hammer. The regime wants to lower the number of gymnasium graduates and increase the number of trade school graduates, who have minimal exposure to academic subjects. The Orbán government also wants fewer college graduates.

But back to the dissatisfied teachers. The letter that was signed by the whole staff of the Ottó Herman Gymnasium in Miskolc spent only one paragraph on their salaries, which have increased somewhat, along with their duties. Instead, they emphasized “the serious problems in the educational system that need immediate remedy.” Tinkering will not do. The whole system is faulty.

The new centralized system doesn’t work. Both children and teachers are overburdened with classes that convey mostly useless information that doesn’t prepare students to become thinking individuals. Let’s sit down and honestly discuss what can be done. That is more or less the gist of the letter.

The head of the local school district who received the letter was sympathetic enough, but he couldn’t do anything. The system is so overcentralized that these problems can be remedied only at the very top. Eventually, the complaining letter was sent to Mrs. Czunyi née Judit Bertalan, undersecretary in charge of public education, who bears a suspicious resemblance to Rózsa Hoffman, her predecessor, both in looks and in methods. Since then, not a word from the ministry.

So, on January 7 the Ottó Herman Gymnasium’s principal and teachers decided to go public. The students immediately assured their teachers of their support. They were proud of them because now they can learn about democracy not just from their history books but also from their teachers’ action. On the very same day two organizations assured the school of their support: the Independent Student Parliament (Független Diákparlament) and the Network for the Freedom of Teaching (Hálózat a Tanszabadságért / HAT).

The latter organization, whose members are teachers themselves, hope that the government will take the contents of this letter seriously. Just to give you an idea of the general dissatisfaction, even officials of the Orbán government-created Klebelsberg Intézményfenntartó Központ (KLIK) secretly assured the teachers of their agreement. And that’s not all.

The president of the pseudo-association of teachers, Nemzeti Pedagógus Kar / NPK, created on the model of Mussolini’s corporatist scheme, announced that although the teachers of Ottó Herman Gymnasium don’t want to have anything to do with NPK, he is ready to support the initiative. He himself is a principal in Győr who complained to the local paper that KLIK has completely run out of funds. Schools are underfinanced. The situation is so bad that there are cities where teachers can have only one piece of chalk a day, or where there is no money for toilet paper.

Meanwhile more and more teachers, principals, and schools have joined the protest. Teachers of an elementary school in Törökbálint took it upon themselves to track the progress of the movement. They began a website, tanitanek.com (I would like to teach), where individuals, schools, and principals can register to support the initiative of the teachers in the Miskolc gymnasium. As of now 7,810 people have signed up.

The teachers in Törökbálint have their own initiative as well. One of the “innovations” of the Orbán government’s educational reform is something called “belső önértékelési csoport” (BECS). Teachers are supposed to supervise and assess each other’s work. One can imagine what effect such a practice can have on a small community. In any case, the teachers in this particular school are basically refusing to adhere to this demand. They already have 2,644 individual supporters and 44 schools, including some parochial schools, like the Lutheran Gymnasium in Budapest.

The word is spreading. Several schools in Budapest, Debrecen, Pécs, and elsewhere joined the teachers of the Ottó Herman Gymnasium. The most interesting development occurred yesterday when the Baranya Megyei Szakszervezetek Akcióegysége (Action Unit of Baranya County Trade Unions) added its name to the supporters.

It looks as if this is a grassroots movement that should not be ignored by the government. But it seems that for the time being Viktor Orbán doesn’t sense the looming danger.

There are about 140,000 teachers and about 100,000 people who work in the healthcare system. Yet János Lázár, in his regular Thursday kormányinfo (government info), instead of offering some soothing words, said: “Those people who don’t like their employer can express their disapproval at the time of the parliamentary elections.” What if these people, the majority of whom I suspect voted for Fidesz, actually follow his advice? And he added that instead of criticizing the present system, the teachers should concentrate on the quality of their teaching, which has resulted in declining test scores ever since 2002. “Teachers cannot act as if they had nothing whatsoever to do with this.” Not a good way to handle a potentially dangerous situation for the Orbán government.