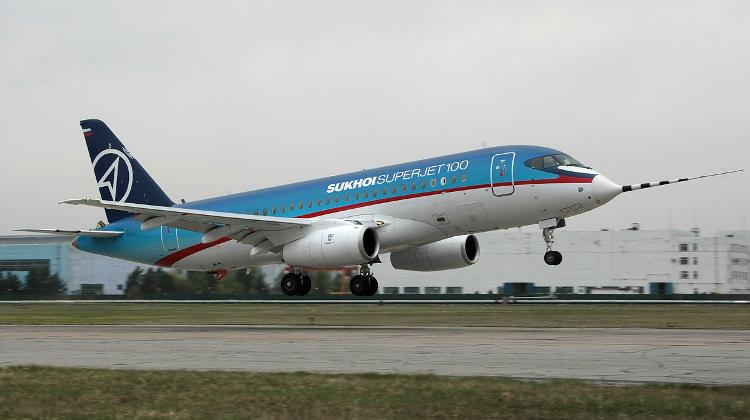 The foundation of a new Hungarian national air carrier, rumoured to be the subject of talks between a Russian company and the Hungarian state, would not take the place of Malév, Magyar Idők suggests. Vs.hu concludes that the deal would benefit the Russian side, primarily.

There is no doubt that the case for resurrecting Malév, the grounded Hungarian national air carrier, is well justified, Gyula Jámbor comments on the latest news about a possible deal that could make this happen in Magyar Idők. First of all, the paper asserts, it would put Budapest back on the map for well-to-do tourists and businessmen who are unwilling to rely on budget airlines from unserved destinations.

Nevertheless, the pro-government author admits that Wizz Air, a successful budget airline founded by Hungarians, has for the most part filled the space left behind by Malév with no problems in a highly competitive market. Thus, the author believes, an offer made by the Russian manufacturer of Sukhoi Superjet planes to co-found a new airline with the Hungarian state does not exactly aim to take Malév’s place. Rather, the Russian company appears to have set its sights only on Malév’s once lucrative Balkan network.

After 66 years of service, Hungary’s national carrier MALÉV was grounded in February 2012.

In the last years of its air operation, it kept running courtesy of billions of Forints of government subsidy. The final blow to the company came from the European Commission, which ordered MALÉV to repay 88 billion Forints worth of illegal government subsidies.

Attempts to found a new national airline have been unsuccessful since then. On 9 February this year, state-owned news service hirado.hu reported that Hungary’s National Development Ministry had been in negotiations with Sukhoi to launch a new national carrier. The ministry has confirmed the information but said talks are at a preliminary stage.

It’s the Russians who would benefit the most from this deal, Vs.hu concludes quoting unnamed sources in its analytic piece. While not excluding that all this might be just a publicity stunt by the not-too-successful Russian company, the online news site mentions several arguments to support this view. First of all, with a Hungarian partner the Russian company could obtain free traffic rights within the European Union.

There is also on ongoing legal battle, underway for years: Malév’s one time Russian partner and financier Vnesheconombank brought a case against the flag carrier for selling the troubled airline’s two ground handling units for a price the bank found extremely low.

A profitable deal, and incorporating the two companies into the new airline, could compensate the Russians for their loss. And of course, equipping the new carrier with Sukhoi jets would also be favorable to the Russian company, since it finds it difficult to sell its new jets in a world market that is very much saturated by Boeings and Airbuses, Vs.hu‘s analyst notes.