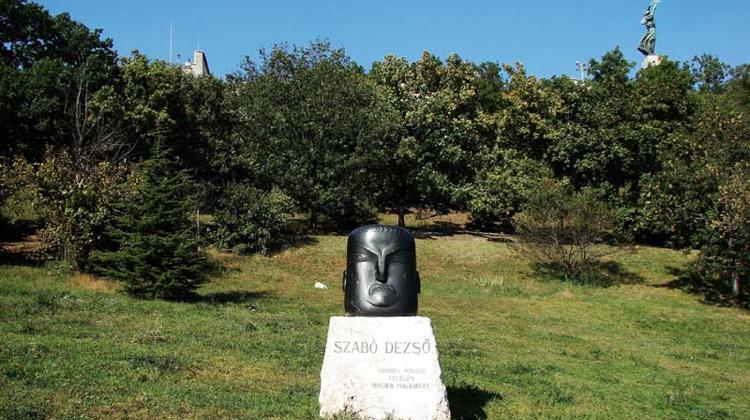 At a time when statues are going up all over Budapest I would like to nominate a candidate for the ugliest statue in town. You should drive up above the Gellért Hotel to the corner of Minerva and Pipacs utca where the one time Swedish Legation is located.

Here Raoul Wallenberg directed his heroic work to save thousands of Budapest Jews. Pipacs (Poppy) street is more of a charming flagstoned lane which leads up to a huge park which seems less frequented than Budapest’s other green spaces, although it appears to be very dog friendly, with the occasional Nagymama pushing a pram.

From here you can walk up gentle paths leading to the Citadella for one of the most spectacular urban landscapes in the world.

And on your right at the very beginning of your walk is the statue to Szabó Dezső. More than a statue it is a giant black head about the size of a washing machine with no neck compensated by an ample double chin. The eyes are frowning angrily beneath a tiny fringe of hair which circles, tonsure like, the head itself. The mouth is turned down at the corners like Steven van Zandt in “The Sopranos”.

Szabo Dezso was a writer in the 1920’s, considered the “first intellectual anti-semite”, his vision being that the renaissance of the Hungarians could only be achieved by the peasantry as only they possessed the true Magyar soul, as opposed to urban culture “corrupted by the mentalities of the assimilated Germans and Jews”.

His defining work was “The Eroded Village” although he also contributed to anti-semitic publications. In his defense it could be said that he was a pure anti- semite rather than a rabid one as he was against the Arrow Cross movement. However what is rather disturbing is that the statue was erected, not during his lifetime, but in 1990.

Both Szabo and the sculptor Tibor Szervatiusz were from Transylvania and during a long life the latter produced a prestigious amount of work, receiving the Kossuth Prize in 2001.

I understand that although a very old man he might still be alive and I am rather hoping that to produce such an ugly statue perhaps he didn’t like Dezso Szabo much either. I am also hoping he doesn’t read the Xpat Loop.