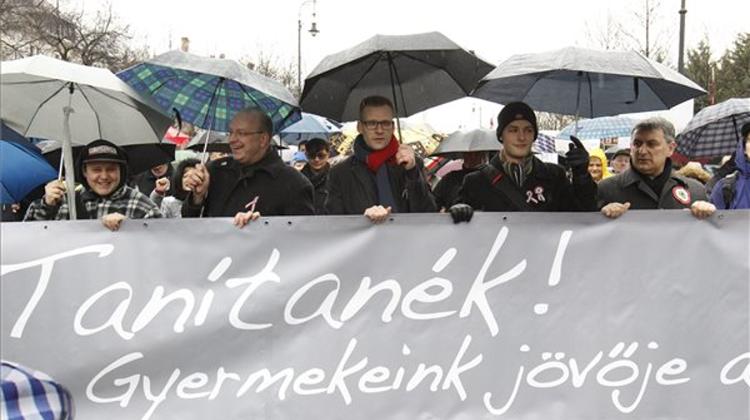 ‘God save us and our children from István Pukli and his buddies!’, Magyar Idők‘s commentator exclaims, referring to the leader of the recent protests. In his editorial in the staunchly pro-government daily, Ottó Gajdics urges those who are truly sensitive to the problems of public education among teachers to come forward and voice their opinions, because their professional problems are being overshadowed by a ‘cacophony’ of daily politics.

Gajdics suggests that the protest movement is haunted by the spirit of the Free Democrats (SZDSZ). He lists several organizations that can be regarded as surviving subsidiaries of the disintegrated Hungarian liberal party, whose activists ‘could be found behind every anti-government demonstration’, all of which have turned into a disgrace.

He names the well-known political activist Árpád Schilling, founder of Krétakör, a theatre company director, as an example. Schilling choreographed the teachers’ rally on March 15th with a timer in his hand, Magyar Idők’s author claims, and he was the one who originally came up with the ‘ridiculous idea’ of the ultimatum that demanded an apology from Prime Minister Viktor Orbán, which, Gajdics asserts, caused discord even among the protesters.

Professional matters of education and the labour woes of the teachers should not be commingled with opposition efforts to come to power, Magyar Hírlap‘s author warns in the conservative paper’s op-ed piece. László Csizmadia, who is also the leader of Civil Unity Forum (CÖF), a grass-roots movement that supports Fidesz, does not dispute that teachers’ unions have a right to organize rallies in the streets to advance their claims for better salaries and improvements in their working conditions, but he cautions them against misleading professional arguments and involving children and parents into their protests.

Opposition parties, of course, can shout from the political side-lines, but they must keep in mind why they were sent there by voters, the author argues, suggesting that instead of demanding an apology from others, it is high time for them to apologize themselves.