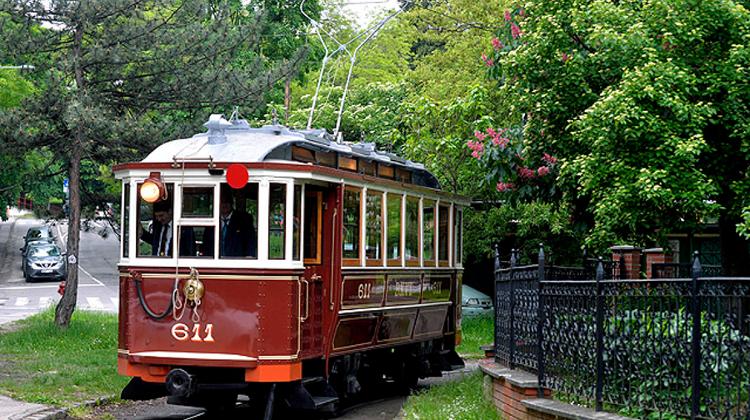 From May 2016 to the end of September, transport and history fans can get the chance to travel aboard vintage trams christened Danube Heritage and Thermal Heritage as well as the Snow White vintage boat at weekends. The Danube Heritage tram runs on the route of tram 2 in Pest which was chosen as one of the ten most beautiful tramlines in the world, while the Thermal Heritage tram runs in Buda on the interweaving tramline passing by the most famous thermal baths. Beside the heritage trams, the Snow White (Hófehérke) vintage boat has been launched as well to transport passengers between Margaret and Elisabeth Bridges on Saturdays.

At the press conference showcasing the renewed heritage transport services, Ms Alexandra Szalay-Bobrovniczky, Deputy Mayor for Human Affairs, announced that Budapest’s already colourful range of touristic offerings is going to expand with an exciting possibility since three new heritage transport lines will be available from now on, which hopefully many people will use, not only the residents of Budapest, families and parents with young children or those who wish to experience the historic atmosphere of the vintage vehicles, but visiting tourists as well.

The deputy mayor added that these heritage transport services form a part of Budapest’s identity and cityscape just like the Fisherman’s Bastion or the Liberty Bridge (Szabadság híd).

On Saturdays, the Snow White vintage boat marked as line SH will cruise on the Jászai Mari Square – Batthyány Square – Kossuth Lajos Square – Castle Garden Bazaar – Petőfi Square route. During the nearly 45-minute-long journey, the beautiful panorama of the Danube banks, listed among UNESCO World Heritage sites, can be admired. The Snow White is one of the last representatives of classic boats built in the 19th century still plying the Danube. The hull was constructed in Újpest in 1895 at the Schoenichen-Hartmann Shipyard.

On Saturdays and Sundays, operating both on the Buda and Pest sides, vintage tram lines await enthusiasts of bygone days.

The Danube Heritage Tram runs on Saturdays between Közvágóhíd H (suburban railway station) and Jászai Mari Square, on the route of tram 2 which was selected as one of the ten most beautiful tramlines in the world.

The line, which was established after World War II, runs along the upper embankment in Pest starting from Jászai Mari Square and reaches the riverbank at Kossuth Lajos Square, then climbing underneath the Chain Bridge, it continues on to the Danube Promenade. Whether during the day or after dark, on board this service an always amazing sight unfolds before the traveller’s eyes as one can admire from close up the fascinating structure of the Hungarian Parliament , then the Danube Promenade with its row of hotels along with the wonderful panorama of Buda with the Fisherman’s Bastion, Matthias Church and Buda Castle reflected in the river’s water.

Budapest is the city of baths with many medicinal hot-springs on its territory whose waters are used in the capital’s popular spas. Traveling with the Thermal Heritage Tram on Sundays, operating on the interconnected tram network in Buda, on the Szent János Hospital – Rudas Thermal Bath – Lukács Thermal Bath – Szent János Hospital route as a circle line, gives the opportunity to visit several historical thermal baths as well.

Along this route, fans of historic ambiance get to view the panorama of the Pest side boasting the Hungarian Parliament Building. Starting from Szent János Hospital, the tram reaches the famous Turkish bath, the Rudas, from where it runs in parallel with the Danube under the Elizabeth Bridge, the Chain Bridge and Margaret Bridge arriving to Lukács Thermal Bath, where showing the heritage tram ticket will grant 10% discount off the spa’s services.

Detailed information can be found at www.spasbudapest.com

The heritage trams require heritage single tickets, heritage daily travelcards or heritage passes that can be obtained in advance at BKK Customer Service Points or on the spot from heritage transport staff. Please find more information about the heritage services, routes and vehicles at www.bkk.hu/nosztalgia/.